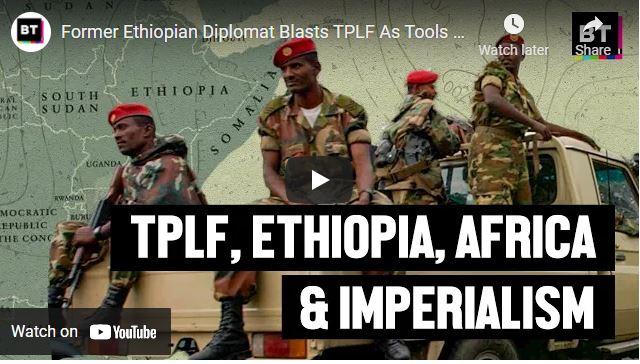 As the situation in Ethiopia continues to escalate, the war over narratives is in full force. Who are the good guys and who are the bad guys? Is it even that black and white? Is the TPLF fighting a war for liberation of the Tigrayan people against a cruel government or is it executing a war of aggression to regain power after losing it? And what should we make of recent developments such as the Oromo Liberation Front joining the TPLF in its fight against the state? What does it all mean for the greater Horn region?

To help make sense of all of this and place it in its proper historical context, Rania Khalek was joined by Mohamed Hassan, who served as an Ethiopian diplomat in the 1990s before resigning in protest of the TPLF. He was also a member of the Ethiopian student movement in the 1970s. And he just returned from a visit to Ethiopia and Eritrea.

0:00 Intro
1:08 Who is Mohamed Hassan and how was he politicized?
8:43 Somalia
11:06 Who is the TPLF? What is their agenda? How did they maintain power for so long?
26:00 The TPLF once described themselves as Marxist. Are they?
30:42 How the TPLF looted Ethiopia
36:34 What is Abiy Ahmed’s political orientation and why does the West dislike him?
40:49 Developments on the ground and why the war started
46:28 Is it true that Sudan and Egypt are involved in the conflict?
51:05 Why did Mohamed resign from his diplomatic post during TPLF rule?
54:34 How does the US cold war with China play out in Ethiopia?
59:12 USAID, Samantha Power and Jeffrey Feltman in Ethiopia, what do they want?
1:05:03 Is a political solution to the war in Ethiopia possible? What’s the end game?
1:07:31 The West’s selective concern when it comes to atrocities in Ethiopia
1:12:45 The geopolitical significance of the Horn of Africa
1:19:26 What is the “new Horn of Africa” and where is it headed?
1:22:06 What new role will Sudan play in the Horn?
1:24:56 The situation in South Sudan and the role it will play in the Horn of Africa