HOME / Multimedia / Crisis In Ethiopia: What the Media Isn’t Telling You About the War In Tigray 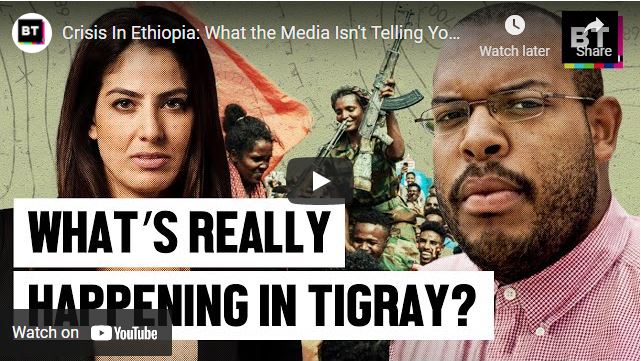 Ethiopia has been in the headlines in recent months as the TPLF, a Tigrayan rebel group that ruled the country for three decades, violently seized the northern Ethiopian state of Tigray from the government. As of this recording, the Ethiopian government had declared a ceasefire. However, the TPLF has continued fighting to expand its control over Tigray’s border areas and threatening to push the war into neighboring countries.

The Western media has largely cheered on the TPLF and demonized the Ethiopian government and its allies, with allegations of ethnic cleansing, intentional famine and even genocide. The US has gone so far as to place sanctions on the Ethiopian government, a longtime US ally. But, as is usually the case with most wars in geostrategic areas of the world, there’s far more to the story than is being told and a whole lot of misleading information from the mainstream press.

To help us make sense of what’s happening and how we got here, Rania Khalek was joined by Eugene Puryear, a journalist for Breakthrough News and host of The Punch Out.

TIME CODES:
3:04 Who is the TPLF?
12:26 Who is Abiy Ahmed?
20:37 Who started the war?
24:19 To what extent is this an inter-communal ethnic conflict?
29:15 How did the TPLF militarily seize Tigray from the powerful Ethiopian army?
31:22 Foreign involvement
43:12 The role of the Ethiopian dam in fueling the conflict
44:00 US weaponizes anti-racism for imperialism
46:31 African lives do NOT matter to the US
55:00 Regime change disinformation network
1:01:29 Why is Eritrea so demonized by the West?
1:07:09 The danger if this conflict persists
1:13:44 What should be the Western left’s position?

0 thoughts on “Crisis In Ethiopia: What the Media Isn’t Telling You About the War In Tigray”