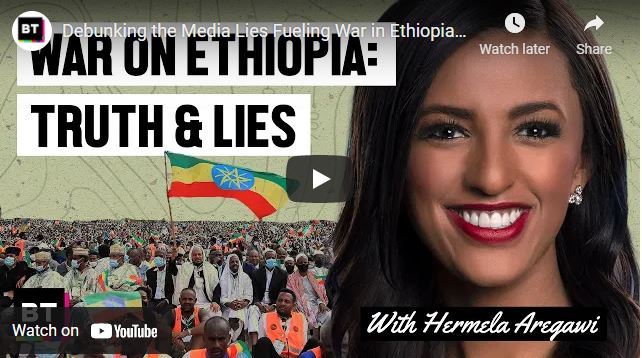 November 4 is the one year anniversary of the TPLF attacks on the Ethiopian government’s Northern Command base, kicking off a brutal war. The TPLF is now advancing towards Addis Ababa, prompting the government to declare a state of emergency. The U.S. government has continued to condemn Ethiopia for fighting back against the TPLF insurgency, leading many Ethiopians to believe that Washington is supporting a violent coup in their country.

Hermela Aregawi is an Ethiopian-American journalist of Tigrayan descent who has been relentlessly attacked and smeared for calling out biased media reporting on the conflict. She joined Rania Khalek to discuss this and more.

0:00 Intro
1:58 What’s happening in Ethiopia?
6:14 Why is the media so biased?
10:33 TPLF influence over media coverage
13:41 How Hermela’s views on the war evolved
20:01 Parallels to other countries, like Syria and Haiti
21:25 The government is NOT blocking humanitarian aid
24:06 Do Ethiopian-Americans feel betrayed?
26:05 What is the #NoMore campaign?
27:42 The vicious backlash against Hermela
33:40 How the TPLF behaves like a cult
38:06 Addressing Tigrayan sympathizers of the TPLF
42:46 The weaponization of humanitarian aid
48:03 Why are the Americans so biased?
51:32 Problems at the UN
56:50 What do you Americans need to understand about Ethiopia?
59:45 Where to follow Hermela’s work