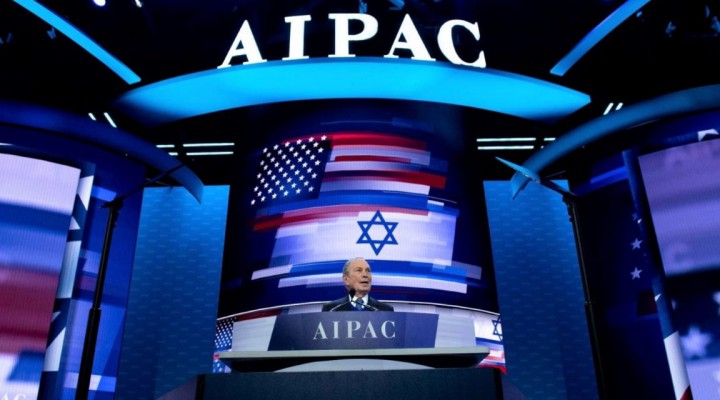 AIPAC called out the Palestinian Authority’s repression of Palestinians and the media in the occupied West Bank, but the PA is only acting as a subcontractor of Israel’s colonial violence. So, what is AIPAC’s point?

The extrajudicial killing of Nizar Banat, a Palestinian man whose criticism of the Palestinian Authority (PA) reached a wider audience than the ministers in Ramallah would have liked, elicited outrage among Palestinians. Banat’s voice may have been more prominent, but his aired grievances were those of the Palestinian people as a collective.

Rather than listen to the Palestinian people, the PA repressed dissent, even among its own ranks. Ehab Bseiso, the Chairman of the Palestinian National Library, was dismissed from his post by PA President Mahmoud Abbas, for criticizing the PA’s dealing with Banat. “Killing a human being is a crime, no matter how blurry, ambiguous and emotional the picture seems, and we must always side with the human against various forms of lethal steel,” Bseiso wrote in a Facebook post.

On the streets, the PA unleashed its security forces. Protestors were met with tear gas, physical violence, and arrests. Women who participated in the protests were sexually harassed, with officers reportedly threatening to publish intimate photos which some of the women had on their mobile phones. The PA’s security forces also attacked Palestinian journalists, prompting members of the Palestinian Journalists Syndicate to demand protection, in a protest outside the UN’s office in Ramallah.

Not to be outdone by diplomats who expressed concern over the PA’s authoritarian tactics, the American Israel Public Affairs Committee (AIPAC) took the time to email its subscribers about the Palestinian leadership’s stifling of dissent. A thread on Twitter draws attention to the propaganda employed by AIPAC, as well as its double standards, in criticizing the PA’s violence while absolving Israel of the same, and worse.

It is no secret that the PA has, throughout the years of its illegitimate rule, resorted to violence to quash any individual or collective dissent. As far back as 2009, reports documenting the PA’s security services torturing Palestinian journalists have been publicly available. Some journalists have been arrested due to political affiliations, others on mere suspicion of preparing the publication of articles critical of the PA.

The 2009 Human Rights Watch (HRW) report states, “Human Rights Watch cannot point to instructions from PA leaders to the security services that they commit these violations, but the utter failure of the PA leadership to address the prevailing culture of impunity for such abuses suggests that they reflect government policy.”

AIPAC’s email, therefore, is an exploitation of a more visible moment in a long history of PA violence against Palestinian civilians. Yet in May this year, weeks of Israeli repression of protests in Sheikh Jarrah, and the aerial bombardment of Gaza, only elicited calls from AIPAC for the settler-colonial state to “defend itself.”’

It surely has not skipped AIPAC’s attention that Israeli strikes deliberately targeted local and international media premises in Gaza just over two months ago, upon allegations of “military interests of the Hamas intelligence” in the buildings. If AIPAC is purportedly so concerned about media freedom in the occupied West Bank, why doesn’t it extend the same scrutiny over bombed media quarters, which journalists were asked to vacate without being allowed ample time to clear their offices and preserve their work and equipment?

What Israel destroyed in Gaza has a string of precedents. At the recent UN Human Rights Council in Geneva, the International Federation of Journalists (IFJ) called out Israel’s systematic targeting of Palestinian journalists in the occupied Palestinian territories. The IFJ noted that 46 Palestinian journalists have been killed by Israel since 2000. During Operation Protective Edge in 2014, Israel killed 15 journalists and media workers in the Gaza strip.

Thus, AIPAC drawing attention to the PA’s crimes reeks of exploiting the moment, since it ignores a history of colonial and collaborative targeting of the media and journalists. Moreover, the killing of Banat and repression of protests calling for Abbas to resign illustrate a segment of the PA’s suppression which has its roots in security coordination with Israel. This means that while AIPAC may have availed itself of the moment for political leverage, as did the Israeli media’s reportage, the PA’s security services – trained by the Central Intelligence Agency (CIA) and working in close collaboration with Israel over quashing Palestinian dissent – have done nothing reproachable from the colonial point of view. Colonialism is violence, and the PA, as Israel’s subcontractor in the occupied West Bank, is carrying out duties which Israel has no political or moral objection to.

Throwing the ball right back at AIPAC, however, is too simplistic. AIPAC must be called out for its exploitation, even as the occasion cannot be used by pro-Palestine supporters to defend, or detract attention from, the PA’s actions. The ramifications of Israel’s colonial and military occupation are exacerbated by the PA. To call out colonial violence is to call out the PA and vice versa, owing to the dependence Israel and the PA have on security coordination. Since the PA instructs its security services to spy, arrest, torture and on occasions, kill Palestinians, it stands to reason that the PA would not act in contravention of what it is ordered to do by Israel, in any given circumstances.

The cancelled Palestinian elections are a case in point. Israel needs the PA to stifle Palestinian dissent, while Abbas is intent on hanging on to his position unchallenged. The smooth collaboration between Israel and the PA to stave off democratic elections serves both interests for the same outcome – without democratic elections, there is, so far, no alteration to the status quo.

Moreover, the PA has established itself as fodder for contempt even from entities that gloss over Israel’s human rights violations. The AIPAC criticism is such an example. So weak is Abbas’ power, that it emulates Israel’s colonial violence and puts itself in an unenviable position, where Palestinians rightfully call for his downfall, and AIPAC riddles the PA with derision.

The saddest part about the debacle is that the PA has no moral ground upon which to counter AIPAC’s comments, and once again, the political game is carried out away from the Palestinians, while they are dealt its repercussions. However, if Abbas expected Palestinians to weary of his tactics, it is best the PA takes note that its violence towards the people will build towards a collective momentum of resistance—one which neither security coordination, nor AIPAC’s propagandist tactics, will be able to hinder.