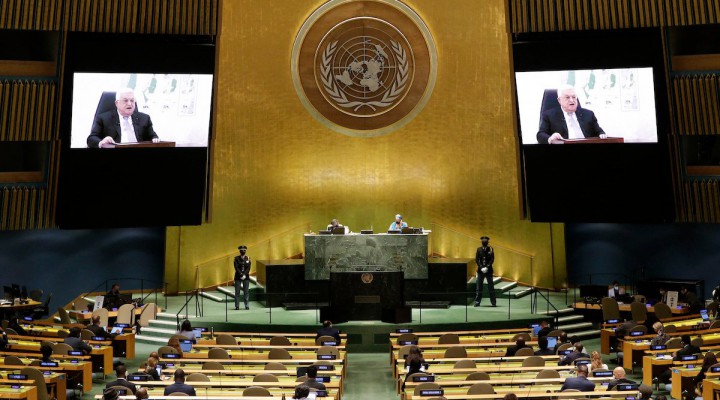 Building upon his speech to the UN General Assembly, Palestinian Authority leader, Mahmoud Abbas, warned that if Israel rejects the two-state compromise, which it has already given the colonial expansion and suspended plans for annexation, Palestinians will opt for political alternatives—the UN Partition Plan of 1947, or a single democratic state.

Abbas’s warnings are, of course, futile. “The time has come to implement the decisions of international legitimacy. [We’ve had enough] promises and delays by the parties of the international community concerning the ending of the occupation and the establishment of an independent and sovereign Palestinian state,” Abbas declared during a meeting with representatives from Bethlehem and Hebron.

The UN Partition Plan, as enshrined by Resolution 181, was accepted by the Zionists—the first step towards international recognition of colonisation in Palestine. Abbas’s plan to go back to UN Resolution 181 is just an affirmation accepting the terms upon which the later two-state diplomacy was built. This means that, out of two options, one option is blatantly corrupt, in addition to being already implemented to the detriment of the Palestinian people.

A single democratic state has been the call of many Palestinians, whose aim is to decolonise the land—a step which the Palestinian Authority, in full agreement with the international community, has refused to consider as an option. Certainly, Abbas has found a staunch ally in UN Secretary-General, Antonio Guterres, with his “there is no plan B” mantra. Abbas is well known for working against Palestinian independence, so what option is Abbas actually considering, other than being complacent towards settlement expansion through “waiting” and clamouring for international peace conferences to testify to his time-wasting?

One of the PA’s achievements and, once again, with dire consequences for the Palestinian people, has been to dissociate Palestine from the Palestinian people. Palestine as an international conjecture, dependent upon Israel’s expansion and the international community’s scheming through the two-state compromise, is not what Palestinians ever envisaged. A single democratic state might have become more recognised had Abbas allowed elections to take place and independent candidates allowed a political voice. However, the PA eliminates alternatives—Nizar Banat is a recent example—and the single democratic state stands no chance with Abbas at the helm.

If Abbas thinks a change in rhetoric is necessary, the 1947 Partition Plan provides the PA with the opportunity to cling to the two-state hypothesis, defunct as it is, but still viable and necessary to deflect attention away from Israel’s colonial expansion. How will Abbas make the case for decolonisation when his choice of an alternative is the foundation to the current predicament?

As for political change in terms of an alternative, Abbas would do well to refrain from equating between the PA and the Palestinian people. Palestinians have called for a single democratic state, while the PA has regurgitated the two-state compromise beyond its extinction. Attempting to wrest the de-colonial narrative away from the Palestinian people, from a compromised position such as the one the PA is in, dependent upon international funding to maintain its existence, is what the PA does when it is cornered and needs the support of the Palestinian people. Such support, however, should not be given. Not unless the PA can divest of its corruption and place the Palestinians politically at the helm.