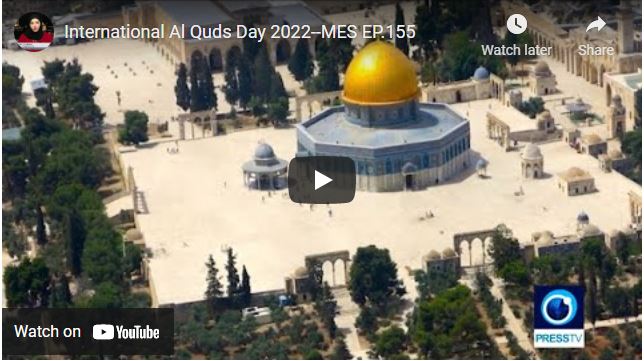 Imam Khomeini, may Allah’s mercy and blessings be upon him, was aware of the nature of the conflict with the Zionist enemy and deeply aware of the dimensions of the battle with this hateful, cancerous entity when he focused his intelligence and foresight – since the first moment of the victory of the Islamic Revolution in Iran in 1979 – on the core of the Palestinian cause and its main axis, which is Al Quds.

The holy city, which for us does not mean only the earth, the stone and the trees, but rather the spirit of a nation, the conscience and the honor of every free Muslim and Christian believer, rather every free human being, in whose veins the blood of pride, dignity and faith pulsates.

Thanks to Imam Khomeini’s will, the issue of Al Quds and Palestine turned into a meeting point for Muslims, a source of their unity, and a date for the interaction of free peoples with the oppression of the Palestinian people, who are subjected to murder and racial liquidation.

To discuss this issue with us from London is Robert Carter producer, journalist and political commentator.

Al Quds day is not a day to celebrate a city in occupied Palestine.

It is the last Friday in the holy month of Ramadan launched by the leader of the revolution Ayatollah Ruhollah Al Khomeini to reiterate that the issue of Al-Quds Al-Sharif is the core of the Palestinian cause.

It is a day for every free soul to acknowledge that the only just solution for the perpetual conflict between Arabs and the Zionist illegal Israel is the ending of the occupation and the return of the City of Al-Quds Al-Sharif to Palestinian sovereignty, as the capital of the State of Palestine.

To discuss this issue with us from London is Patrick Henningsen founder of the 21st century wire and host of the Sunday wire radio show.