HOME / WORLD / As the Strategic Balance Inverts, Israel is Politically and Militarily Paralysed 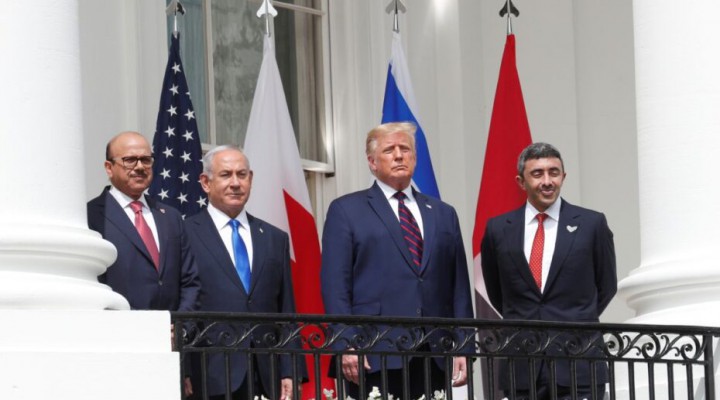 So fatigued by their own rhetoric have Israeli and western leaders become, that they will not think or say that Israel has run out of options.

Many Israeli commentators are bracketing Trump with Netanyahu. Veteran correspondent Ben Caspit, for instance, asks: Is Netanyahu “a Middle Eastern clone of Donald Trump?”. He continues: “The worst could still be ahead. Barring a last-minute change, the Knesset is scheduled to swear in the new government June 13 … Will Netanyahu in a last-ditch effort, engineer a Capitol-style invasion in Jerusalem? Will he call on his followers to march on the Knesset to prevent being unseated? … his Likud party has issued statements in English, informing the world that deposing Netanyahu means turning Israel into a dictatorship and comparing his designated successor Yamina leader Naftali Bennett to the leaders of North Korea”.

To be fair, Caspit answers his question with a ‘both yes and no’. But actually, the asking of this question is a pure ‘red herring’. Superficially, some parallels might have merit; but to frame the issue in this way is disingenuous, and misses the key point that Israel’s situation is far graver, than widely understood.

Israel has painted itself into a tight corner. Trump certainly helped Netanyahu with this, but the dynamic was as much a child of Clinton-Obama myopia, as that of Trump. Netanyahuism has been a phenomenon many years in the making; although undoubtedly was accelerated, and put on steroids, during the Trump era, when the power and platform of the U.S. government became the echo chamber of the Israeli Right.

So, what precisely, is the smoke-screen of ‘is Netanyahu channelling Trump’ obscuring? It obscures the reality that Israel has turned decisively Right – across the political spectrum. This may be described as Bibi’s personal ‘doing’, but it is no longer a matter of Netanyahu’s personal charisma. Israel has become structurally right-wing. It has become culturally right-wing, too. No longer the secular, ‘socialist’ Kibbutzim of yore (long since marginalised): Israel’s military and political leadership rather, is now predominantly Religious-Nationalist and Settler. This represents a ‘cultural revolution’ largely unnoticed in Europe.

Chen Artzi Sror, writing in Yedioth Ahoronot, observes that whilst formerly, the biggest fear gripping religious Zionists had been that of surrendering territory. The fallout from the 2005 evacuation of the Gaza settlements, pushed the settler community to expand inside Israel. Thus began the move of young religious Zionists to embed themselves into policy making, communication and government.

The early cultural components of hanging on to territory have however, undergone a revolutionary shift: Settling the land of Israel is no longer the main issue occupying religious Zionism. “Most of the Israeli public holds right-wing positions when it comes to issues of security and politics – and the West Bank is positively brimming with settlements that will most likely never be evacuated”, Sror writes. “These once solitary localities have become somewhat bourgeoise … Now, significantly, the ultra-Orthodox nationalists pursue something quite different – a worldview that strictly opposes what they call “post-modernism””.

Which is to say, “Anything that seeks to change the perception of family life and advance gender equality and equal treatment of non-Jews is perceived to be an existential threat to the very foundations on which the Jewish state was built” [emphasis added]. This dictates that the ‘People of Israel’ must be saved from foreign influence – and more particularly from Leftists: “Not those [Leftists] who want to evacuate settlements in order for a Palestinian state to arise, but those who march in the Gay Pride Parade and believe in equality for men and women. The vast majority of religious Zionists are more liberal than this, and as such send their children to pre-military yeshivas and youth movements. But it is in these very places – that such extremely conservative worldviews are often introduced”.

The incitement amongst the Israeli Right has become very, very aggressive. Though Netanyahu loyalists are attacking Bennett and his Yamina party MPs, they largely believe in the same causes: settlement building, annexation of much of the West Bank, and Jewish supremacy over Palestinian citizens of Israel – “Yet they now feel galaxies apart”.

Netanyahu promotes a clear message that his new rivals are “traitors” who have betrayed the “people of Israel”. He has called Bennett a “habitual liar”; the March election he described as the “biggest election fraud in the history of the country”; and he lambasted the so-called “deep state” in Israel for pushing to form a “dangerous left-wing government” backed by “terror supporters”.

Israeli analyst, Meron Rapoport, notes that whilst Netanyahu built his political base on extreme polarisation, the discourse of hatred now is eating alive the Israeli Right. And, because Netanyahu believes his only way to maintain power is to call Bennett a traitor, as his supporters threaten to kill Knesset members, the atmospherics are being compared to the days prior to November 1995, when Israeli Prime Minister Rabin was assassinated in Tel Aviv. Paradoxically, since these leaders hail from the same right-wing camp and were close to each other, the anger and sense of betrayal are even stronger.

What is the point here? Even the long-serving U.S. ‘peace process’ negotiator, Dennis Ross, writes that at this point, “direct talks on the permanent status issues will go nowhere—the politics on each side, the real gaps on the substance, and the disbelief of their publics guarantee nothing would be achieved”. In other words, talks between Palestinians and Israel are pointless. The Israeli polity effectively is self-locked into entropy. There is no political way out from this very tight corner. Ross suggests that Biden should cynically ‘park’ the Palestinian issue, treating it as a PR exercise, without investing into it much political capital.

Ross’s comments reflect another entropy – that which is arising within the U.S. For while U.S. state apparatus is locked onto the old mantras of ‘Israel has the right to defend itself’ and Hamas is the ‘threat’, and Congressional élites remain lock-solid, America is experiencing its own tectonic shift. Two surprising polls were released recently: Researchers at the University of North Carolina at Pembroke (UNCP) commissioned the Barna Group to survey evangelical Christians about their views on Israel/Palestine.

And it is the same story amongst young Americans more generally: A recent Harvard-Harris poll of registered voters asked: “Who is more responsible for the violence in the Mideast – Israel or Hamas?”. It produced the following results: (18-34 year olds): Israel: 60%, Hamas: 40%; (35-49 year olds): Israel: 51% Hamas: 49%. (Note that the poll specified Hamas, rather than Palestinians – and Hamas is labelled terrorist in U.S. mainstream media, which makes the outcome even more significant)

The Democrats are already freezing solid, committed to old mantra – whilst young progressives, such as AOC, are snapping at Biden’s heels, asking about Palestinian rights. Western politicians can ‘talk the talk’ of two-states, but it is ‘empty talk’. They have no idea what to do next, and Israel’s success in weaponising ‘anti-Semitism’ (Corbyn being its prize scalp) effectively has Europe self-paralysed with fear for their careers.

It succeeded in mobilising the 1948 Palestinians (citizens of Israel) to resistance alongside their fellow Gazan and West Bank Palestinians. And it set the trap by which any provocation on the al-Aqsa compound, or any further Jerusalem ethnic clearances, could trigger a multi-front war. The Hizbullah leader, Seyed Nasrallah, spelled this out explicitly.

It is on this last point that there is denial all around. Israel’s ‘military edge’ has gone. It is the axis of Hamas, Hizbullah, Syria, Iraq, Iran and AnsarAllah (the Houthis), rather, which now has the military – and political/strategic – edge. The strategic balance is inverted: Israel’s control of airspace is unrestricted – over Gaza only. Deeply buried and dispersed smart cruise missiles surround Israel, and radar blocking drone swarms, together with EWS, have altered the military calculus.

The reason the Israeli crisis is graver than many suppose is that no one wants to admit that Israel effectively has wasted its window to any political solution – chasing hegemony and its ‘victory narrative’. It has succumbed to Netanyahu’s narrative of ‘mission accomplished’ – the Palestinian issue supposedly made irrelevant – only to find the window of politics closed shut, at the same time that Israel’s military situation has reversed itself, decisively. The old certainty of Israeli military domination ultimately securing Palestinian acquiescence now looks decidedly frayed.

So fatigued and numbed by their own rhetoric have Israeli and western leaders become, that they will not think or say that Israel has run out of options. And so western policy continues on auto-pilot. Inevitably there will be further Right-wing provocations at al-Aqsa. The IDF will default to its policy of ‘mowing the Gaza lawn’ – only one or other of these times (maybe quite soon), Israel will find itself in a multi-front war.

Are they certain America will spend its blood to extract Israel from its self-made quagmire? Are they convinced Gulf States will be there too, shoulder-to-shoulder?

0 thoughts on “As the Strategic Balance Inverts, Israel is Politically and Militarily Paralysed”