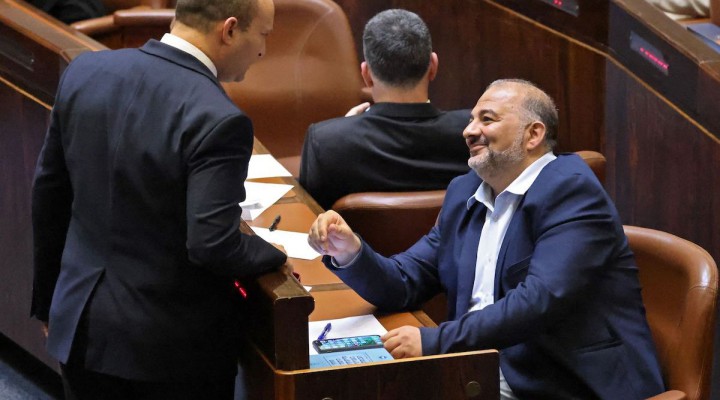 When Palestinians face the prospect of the colonisation of the last remaining shards of their land by Israel, the answer is surely not collaboration with the right-wing apartheid state. And yet this is what Mansour Abbas has done by joining Israel’s new coalition government.

A recent lengthy interview with Abbas published in Time magazine is replete with contradictions and complicity. On the surface, he summarises his decision to enter into a coalition with Israeli Prime Minister Naftali Bennett as a process purportedly bringing “calm to the region, a feeling of hope that it’s possible to live together.” He does, though, consider the possibility that he might be wrong.

It is difficult to fathom how a phrase such as “political partnership and tolerant political dialogue” can feature in Abbas’s more lengthy discussions regarding his decision. There is nothing remotely tolerant about a settler-colonial ideology and state which seek to destroy historic Palestine and its people.

Throughout the Israeli offensive against Palestinians in Gaza, and the dispossession of Sheikh Jarrah, the people across all Palestinian communities united against colonial violence. Abbas’s coalition move, which he says will prioritise Palestinians living in Israel, fragments the new beginnings of the unifying process that is long overdue. A Palestinian directly sustaining Bennett’s right-wing government sets a dangerous precedent, one that risks further alienation within the already fractured Palestinian society. Narratives of forced displacement in the Palestinian people’s collective memory have been one unifying factor. Within the Palestinian political echelons, new standards of betrayal are forming. It is not just the Palestinian Authority’s corruption that the people have to contend with, but also the willing collaboration within the Knesset, led by a former settler leader whose advocacy for the forced disappearance of Palestinians should be taken literally. Bennett, remember, has boasted of killing “Arabs”.

Abbas may call his achievement a breakthrough, but to frame it as a victory for Palestinians is hypocritical. Not only has Israel not started to reconcile and recognise its role in the Palestinian people’s ethnic cleansing, but its actions also illustrate that the colonial project is yet to be completed. Where is the victory in joining an alliance which holds the concept of “Greater Israel” as its ultimate objective? What peace does Abbas hope to advance when the people he claims to represent have been abandoned as a result of this direct collaboration with Zionist settler-colonialism? And why should he fragment the Palestinian narrative by a political dismemberment of the Palestinian struggle for liberation based on identities that emerged post-Nakba?

Morally, Abbas’s decision eclipses all rationality. The same goes for the political aspect. Brushing aside all rhetoric about tolerance and peace, the emerging picture of additional betrayal of the Palestinian people will only strengthen Israel’s penchant to display its power, even as within the immediate timeframe, the ousting of former Israeli Prime Minister Benjamin Netanyahu will divert attention away from what is at stake.

Mansour Abbas has taken an oath of complicity with all forms of Israel’s colonial violence. It is hard to take him seriously when he calls the ultranationalist Flag March in Jerusalem “unbridled provocation,” which it undoubtedly was. A flag manifestation, however, holds lesser value than a Palestinian politician willingly joining the fringes of settler-colonialism and opening a new chapter in the normalisation of Israel, when the Palestinian people have so steadfastly and so recently prioritised their land and unity.

0 thoughts on “In joining the coalition, Mansour Abbas fragments the Palestinian political struggle”