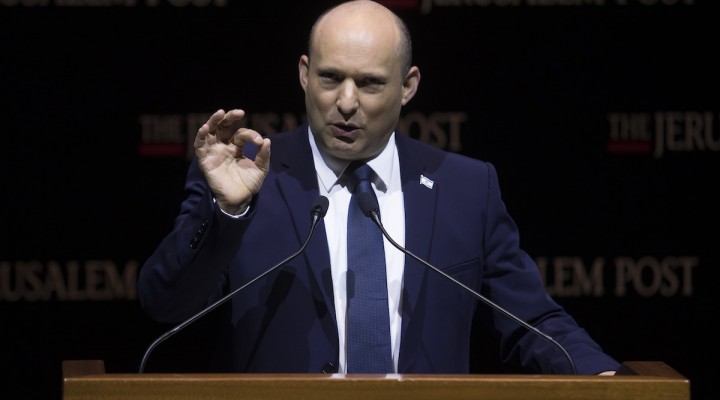 “Israel has been defined [for] too many years by the Israel-Arab conflict,” Israeli Prime Minister Naftali Bennett complained in a recent interview with The Times. However, even Bennett’s intentional omission of Palestine, in keeping with the normalised but erroneous use of “Israeli-Arab conflict” preferred by diplomats, screams out the importance of defining Israel through its colonial theft of Palestinian land.

Bennett’s strategy is different from that of his predecessor, Benjamin Netanyahu, whose belligerent allegiance with former US President Donald Trump enabled an acceleration of Israel’s colonial expansion. This, of course, allows Bennett to dangle the promise of economic incentives for Palestinians and the Palestinian Authority.

Likewise, as the interview notes, Bennett would have been unable to set the contradictory policy of no annexation and no settlement building freeze, had Netanyahu and Trump not paved the way for the current political climate through the Abraham Accords. In truth, Bennett’s annexation plans will be realised indirectly through de-facto annexation, which does not compromise the normalisation agreements that took issue with formalised, rather than “natural” colonial expansion.

The more that Palestine and its people are marginalised, the more it is imperative to define Israel as a manifestation of its colonial violence. Its actions do not merit anything else, unless defining Israel is left to the compromised diplomats who laud colonialism through their inaction while pretending to support an independent Palestinian state. The international community has normalised Palestine’s disappearance as much as it endorses its symbolic memory, but only as far as it serves the two-state compromise.

Bennett’s displeasure at Israel being associated with Palestine’s territorial loss can be remedied if the Israeli government embarks upon decolonisation. What Israel repeatedly chooses is an affirmation of its earlier violence, though, and the international community retains its stance by speaking out against violations while simultaneously endorsing Israel’s false security and “self-defence” narrative.

What Israel and the international community perpetuate against the Palestinians will result in further association with what is being done to the Palestinian people and their land. Militarily and diplomatically, Israel undoubtedly has the upper hand. It can bomb Gaza and restrict freedom of movement with nothing more than a reprimand from the international community.

But Israel is also inscribing its own narrative which is steeped in the ethnic cleansing which Zionist paramilitaries perpetrated during the Nakba, and which the Israeli government continues today through forced displacement and home demolitions, even if Bennett tries to mute criticism by seeking to appease the varying political differences of his coalition government. Or in terms of its global image, through its economic and scientific achievements, always at the expense of the Palestinian people.

So what exactly is Bennett displeased about? That the mere mention of Palestine, or Palestinians, still has the power to remind the world of an ongoing Nakba, despite global efforts to force Palestinians into an exploitative paradigm which gives Israel the green light to colonise more of their land?

There is no escaping the fact that Israel’s international standing is tainted permanently, despite the efforts to excuse or justify its violence. However, history has shown that attempts to eliminate Palestinians from their own history have backfired as a result of the people’s resilience. Israel’s violence has, albeit unwittingly, enforced collective remembrance of what it has done, and continues to do, to the people of Palestine over the past seven decades and more.

0 thoughts on “Israel cannot escape its legacy of violence”