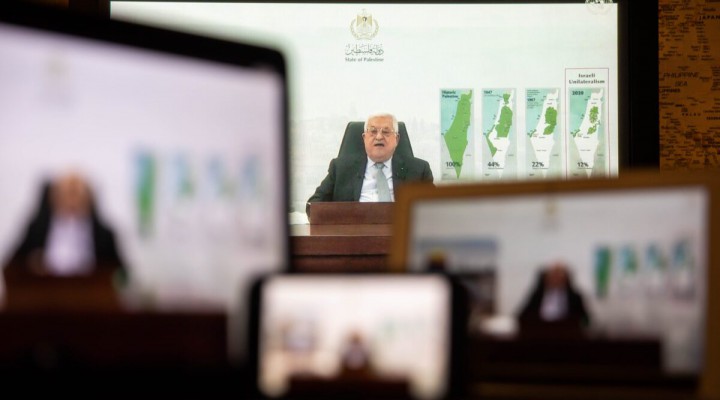 From this year onwards, Palestine’s national flag will be flown at half-mast on 2 November, as a reminder of the 1917 Balfour Declaration. This is according to a presidential decree signed by Palestinian Authority leader, Mahmoud Abbas, and affects local government departments, as well as diplomatic offices abroad.

According to Wafa news agency, “The decree aims at reminding the world, in general, and the United Kingdom, in particular, of the suffering of the Palestinian people and their rights to achieve independence, statehood and self-determination.”

Abbas’s satisfaction with futile symbolic gestures knows no end. It is more apt to ask what the PA intends to do to fortify its symbolic message politically? Nothing, of course. Why would an anniversary and a new flag ritual urge the PA to adopt a historical approach which recognises that its hierarchy is complicity in the colonialism intended by the Balfour Declaration?

Holding the UK accountable for its colonial designations on Palestine and its allegiances with Zionism cannot happen while the PA remains non-committal to the Palestinian people’s political rights. Statehood, independence and self-determination are not catch phrases, but require a process which, for the PA, will also necessitate a thorough reckoning with the Palestinian people who have been politically marginalised to accommodate the two-state narrative and its repercussions.

An annual commemoration holds no significance, considering the dynamics through which the PA operates. If Abbas wants to prove his stance against colonialism and its violence, the Balfour Declaration should provide some introspection about the PA’s political complicity with Israel’s colonial legacy.

The State of Palestine’s UK mission glosses over the Balfour Declaration without a single mention in its “About Us” section, focusing, instead, on diplomatic jargon of deepening ties and engaging with the UK for a just solution “as a former British Mandate.”

“The UK has historically played and still plays a special role in Palestine,” the website states. What role it played, however, is obscured. The UK enabled Zionist colonial violence against Palestinians and paved the way for their dispossession. If the PA finds it too difficult to acknowledge its people’s history in diplomatic relations, why the charade of flying the Palestinian flag at half-mast for a day? Britain will not care, and neither will the international community.

A flag does not remind the world about Balfour’s legacy and its ramifications, especially when the PA steers clear of a historical clarification in terms of British-Palestinian diplomacy.

If the Balfour Declaration enabled Zionist colonisation, the PA is doing the same in its position. Does Abbas need reminding of how the PA squandered Jerusalem, how he verbally forfeited the right of return, or of how he failed to challenge the Oslo Accords’ marginalisation of Palestinian refugees? Not to mention how the PA functions as an extension of Israel and finds no contradiction in its role— another derivative which can be traced back to the colonial violence inflicted on Palestinians. Once again, all Abbas has managed is attracting ridicule with symbolic gestures that fail in terms of political accountability.