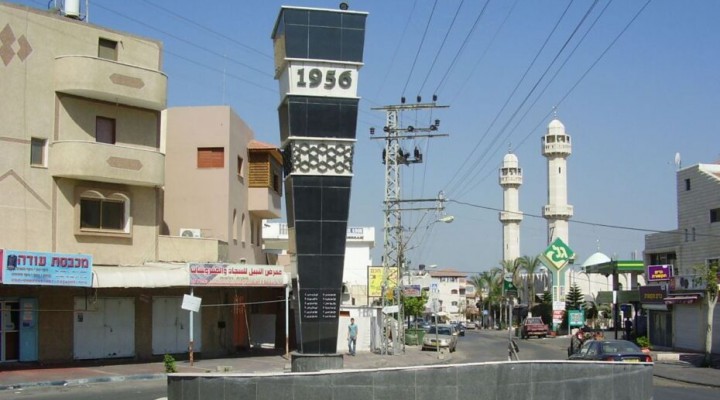 With Kafr Qasem, as well as with other massacres, Israel needs to set the record straight – it is a perpetrator, with intent, and with an entire political structure that has supported its ethnic cleansing for decades.

On the 65th anniversary of Israel’s brutal massacre on the village of Kafr Qasem, where 48 Palestinians were gunned down by border police, the colonial entity has still failed to formally acknowledge its responsibility for the killings. A bill presented at the Knesset by Arab Israeli MKs was once again voted down. The bill would have required educational instruction in Israeli schools about the massacre, as well as the publication of any classified documents.

The Kafr Qasem massacre is an example of Israel’s premeditated ethnic cleansing of Palestinians. On the same day it attacked the Suez Canal, along with its French and British allies, a curfew was placed on eight Palestinian villages and communicated late, to ensure that Palestinians travelling back home from work would be out after the time restriction. The massacre is one example of Israel’s ongoing Nakba, and one that targeted Palestinians in Israel. Through re-enactment of terror reminiscent of the Nakba, Israel was aiming at further Palestinian dispossession.

It was only 25 days after the massacre that the international community became knowledgeable of the killings, through a press release by Tawfik Toubi, which explained the gruesome massacres in detail. “In some cases, the police stomped on the heads of the dead and sunk their bayonets in the bodies of the women,” an excerpt from the press release included in Samia Halaby’s book, Drawing the Kafr Qasem Massacres, reads.

Israeli President Isaac Herzog attended this year’s memorial. His presence was an example of Israel’s hypocrisy when it comes to Palestinian history as a result of colonial violence. Asking for “forgiveness”, Herzog stated, “For it is clear to all of us: the killing and injury of innocents are absolutely forbidden. They must remain beyond all political arguments!”

But Israel has never made the distinction of the innocent. All Palestinians are a target, since each Palestinian stands in the way of Israel’s colonial expansion. In the case of Kafr Qasem, however, Israel is not averse to making a distinction between this massacre and other previous bouts of ethnic cleansing. Why should Palestinians “forgive” Israel for the Kafr Qasem massacres when the colonial enterprise is failing to institutionalise its culpability? Furthermore, why ask forgiveness for Kafr Qasem and not for the earlier massacres which paved the way for Israel’s ongoing ethnic cleansing?

Herzog’s words attempted to steer clear of what he called “political argument”. At the commemoration, he declared, “This is our opportunity, as a human society, to empower what we have in common as citizens and as neighbours.”

There is no equality between what Herzog calls citizens and neighbours without decolonisation. The Israeli president spoke from a privileged position to Palestinians who have lost family members, knowing that the perpetrators faced only a charade of justice. The convicted officials responsible for the murders were released from prison by 1960, by means of reduced sentences or pardons, meaning that the Israeli justice system failed to recognise the severity of the crime and the ethnic cleansing of Palestinians.

Speaking about the massacres politically as well as in terms of criminal culpability is necessary to ensure that the Palestinian narrative emerges. It is well documented that Israel’s existence is rooted in massacres and Palestinians’ dispossession.

With Kafr Qasem, as well as with other massacres, Israel needs to set the record straight – it is a perpetrator, with intent, and with an entire political structure that has supported its ethnic cleansing for decades. There should be no dissociating from political accountability merely to ensure that Palestinian memory remains distinct from the history which Zionist colonisation perpetrated since the Nakba.

Are You Feeling Safer? ‘War of the Worlds’ Pits U.S. and Israel Against Everyone Else