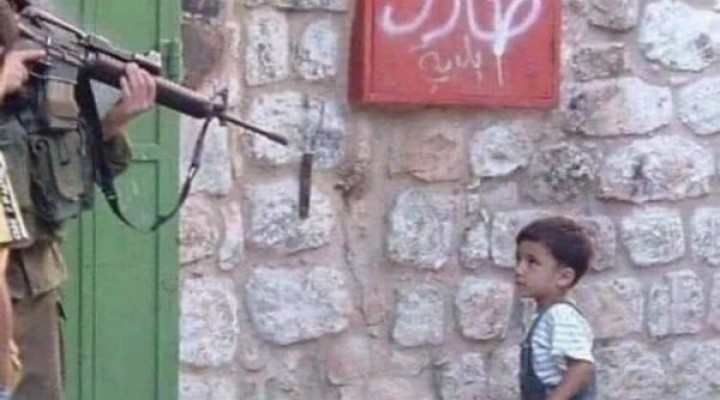 Now let me get this straight. A nation bullies and harasses a much smaller neighbor which eventually leads that neighbor to strike back with largely home-made weapons. The larger and more powerful country, armed with state of the art killing machines, attacks its basically unarmed opponent and kills hundreds of civilians, including a large number of children. It also destroys billions of dollars of infrastructure in the poorer and weaker neighbor. Almost immediately after the fighting stops, senior legislators from a third nation that had nothing to do with the war apart from supplying the larger nation with weapons appeared on the scene and promoted the lie that the larger nation had actually been the victim of an unprovoked attack by the “terrorists” running the small nation. They did so publicly while meeting with and endorsing the actions of the government officials from the large nation, which, it would seem, is about to be investigated by an international body for war crimes. They were joined by an ex-officio former foreign minister of the third nation who likewise echoed the propaganda being put out by the large nation. Several of them also promised to provide military assistance worth $1 billion so the large nation could rearm itself.

Of course, I am writing about how Republican Senators Lindsey Graham, Ted Cruz and Bill Hagerty traveled to Israel over the Memorial Day weekend and bowed and scraped before Prime Minister Benjamin Netanyahu and company. During his meeting with Bibi, Graham even held up a sign reading “More for Israel.” They were joined in Jerusalem by former Secretary of State Mike Pompeo who was in town visiting with his old friend Yossi Cohen, head of the Israeli Intelligence service Mossad, who is retiring soon.

I sometimes wonder what the Founding Fathers would think about senior legislators ignoring their constituent duties so they could instead travel overseas to pander to the corrupt rulers of a foreign nation that exhibits none of the civic virtues that the Constitution of the United States once embraced in establishing a new republic? Cruz, for example, is a particularly ambitious slimeball who clearly sees his future in the tight embrace of the Israel Lobby. He was recently on the receiving end of some bad press when he abandoned his home in Houston, at the time suffering from a prolonged electricity crisis due to storm damage, to take his family to Cancun. Cruz is a senator whose main job is promoting himself.

Cruz used the opportunity provided by his presence besides the exalted Netanyahu to denounce President Joe Biden for his Administration’s failure to help Israel while it was under attack by the terrorist hordes. Before he left for Israel he stated that he intended “to hear and see firsthand what our Israeli allies need to defend themselves, and to show the international community that we stand unequivocally with Israel. Far too many Democrats morally equivocated between Israel and the terrorists attacking them, and fringe progressive Democrats went even further with wild accusations and conspiracy theories.”

After a day spent touring Israel’s Iron Dome rocket-defense system before viewing damage in Ashkelon in Israel from the Gazan rockets, which he commemorated with a weepy self-video demonstrating his empathy for the Israeli dead, he said that Biden’s calls for Israel to seek a cease fire had “emboldened” the “Hamas terrorists.” He elaborated that “The longer Joe Biden shows weakness to Hamas or Hezbollah or Iran, the more you’re going to see terrorist attacks escalating.”

But it was Lindsey Graham who has to be awarded the prize for being completely oleaginous in the presence of Netanyahu, holding up a sign reading “More for Israel” while practically swooning in the presence of the great leader. He said, with a grin, “The eyes and ears of America is Israel. Nobody does more to protect America from radical Islam than our friends in Israel.”

Flattery will apparently get you everywhere you want to be as Graham is surely aware that Israel is a strategic liability for the United States and its brutality is in fact a recruiting tool for radical groups. Holding up his sign, Graham then asked, “So what can you expect, my friends in Israel, in the next coming days and weeks from Washington? More.” For the home audience he then elaborated on a tweet what “More” would mean. “Great meeting this morning in Jerusalem with Israeli PM Netanyahu. ‘More for Israel’ to help protect and defend from Hamas rocket attacks.” Graham later reported to Fox News that Israel would be sending Defense Minister Benny Gantz to Washington to negotiate the request for the $1 billion increase in military aid to restore its “deterrent” after the savage bottle rocket attack by Hamas. He elaborated “It will be a good investment for the American people. I will make sure in the Senate that they get the money.”

Since the Senate Committee is packed full of Democratic Party Zionists, Graham knows for sure that his support for giving Israel the money will be approved in committee to go to the House for a final vote where it will be also be approved. And the White House is actually signaling that the Treasury check will be somewhat bigger, to the tune of $1.2 billion. A smiling Netanyahu demonstrated that he knows how to say thanks for the freebee, telling Graham “No one has done more for Israel than you, Senator Lindsey Graham, stalwart champion of our alliance and we have no better friend. You’ve been a tremendous friend and a tremendous ally.”

The third Republican Senator Bill Hagerty of Tennessee, a former Trump Ambassador to Japan, is a bit of a non-entity compared to his superstar traveling companions, though he, like Cruz, is unfortunately on the Senate Foreign Relations Committee and has taken the lead on authorizing immediate resupply of Israel’s weapons. And he too got into the game of kissing Israel’s posterior, posting a media release on his Senate website saying “Cruz and Hagerty Land in Israel to Assess Damage from Hamas War: Americans watched in horror when Hamas and other Iran-backed terrorists in Gaza recently launched thousands of rockets at innocent men, women, and children in Israel. I’m joining Senator Cruz, my colleague on the Senate Foreign Relations Committee, to visit Israel and stand shoulder-to-shoulder with our allies after they endured the worst terrorist attacks in recent years because I want to see firsthand what more the U.S. can do to strengthen our vital alliance with Israel at a time when terrorists like Hamas and Hezbollah and terror-sponsoring regimes in Iran and Syria are making the Middle East more dangerous…”

Pompeo also did his bit, enthusing over his attendance at the retirement party for Cohen. He tweeted how it was “Great to be with good friends in Tel Aviv!” He clearly has acquired the presidential pretensions disease and knows which button has to be pressed first.

One notices immediately the complete lack of any expression of sympathy for the hundreds of Palestinians who were killed by Israel in what was a war that was provoked by the home seizures, armed mobs of settlers in remaining Arab neighborhoods and attacks by soldiers and police on the al-Aqsa mosque in Jerusalem. After that, one notes that these clowns pretending to be senators are people who were elected and generously paid by American citizens, not by Israel, yet they seem to believe it is completely appropriate to be spend time in that country meddling in someone else’s war on behalf of a rogue state. If anyone is worthy of impeachment, it is they, but never mind, neither the Zionist dominated US national media nor the Establishment will make any such demand, quite the contrary. Be that as it may, their behavior is despicable and is symptomatic of type of corruption that is preceding the decline and fall of what was once a great nation.