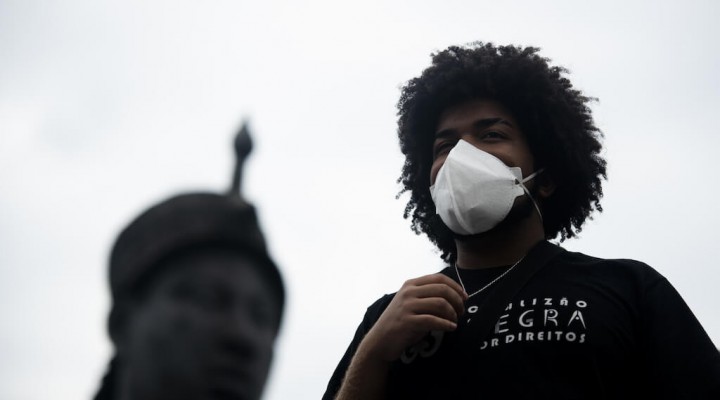 COVID19 may well be the moment for political change in Brazil, yet the pandemic must not obscure the reasons behind the Brazilian people’s dissent.

Brazilian President Jair Bolsonaro is facing mass demonstrations across the country calling for him to step down, in the context of the government’s mishandling of the coronavirus pandemic and growing allegations of corruption. “Bolsonaro has a knack for creating enemies out of his supporters,” Prof Anthony Pereira was quoted as saying recently, in the context of demonstrations in Brazil against the government’s mishandling of the coronavirus pandemic.

But will the protests be enough to bring Bolsonaro down, especially when the rift between the left wing and the right wing in Brazil remains so pronounced? COVID19 mismanagement might create a common ground, but only within the pandemic context as, behind the scenes, Bolsonaro and his supporters have benefited from his right-wing, neoliberal agenda.

Brazil has the highest COVID19 death toll in Latin America and the second highest globally, exacerbated by an absence of planning and complete disregard for the country’s collapsed healthcare system. It is not merely the inequalities inherent in Brazilian society which have influenced the collapse, but the government’s refusal to consider any measures other than a strategy to achieve herd immunity through infection, under the pretext of curbing people’s freedoms. While Europe is waking up to the complexities of curbed freedom of movement despite available vaccines due to countries pursuing different policies, in Brazil the people are facing a totally different scenario.

Brazil’s former health minister Luis Henrique Mandetta was fired by Bolsonaro after challenging his unscientific approach to the pandemic. With Bolsonaro disregarding health professionals’ advice, and playing a dangerous game regarding the availability of vaccines, which have reduced the death toll especially in the case of the elderly and the vulnerable, Brazilians are concerned about their wellbeing and the government’s refusal to provide for their health.

In March, Brazil sent a delegation to Israel to view the process of an experimental medication being developed for COVID19, with an adviser to Bolsonaro stating the visit would “yield partnerships that will make a difference in combating the health crisis and in the resumption of the Brazilian economy.” By May, Brazil was seeking deals to acquire surplus doses of the Astra Zeneca vaccine from the U.S. and U.K.

Brazilians are concerned about their wellbeing and the government’s refusal to provide for their health.

Since August 2020, Brazil engaged diplomatically with Russia to obtain the Sputnik V vaccine, which was later suspended by the country’s national health service, Anvisa, on account of alleged “lack of consistent and reliable data,” despite favorable reviews in the leading health journal, The Lancet. Reuters has recently reported the definite cancellation of a contract with Russia for 10 million doses of the Sputnik V vaccine.

The Sputnik V contract cancellation comes after Brazil suspended a $324 million contract with Bharat Biotech for 20 million doses of Covaxin, after a series of irregularities in the deal were highlighted, including discrepancies in the contract in terms of payment, doses and intermediary companies involved.

With anger increasing among Brazilians, tens of thousands of demonstrators across the country have been taking to the streets demanding Bolsonaro to step down.

With anger increasing among Brazilians, tens of thousands of demonstrators across the country have been taking to the streets demanding Bolsonaro to step down.

At the beginning of Bolsonaro’s presidency, the struggle against the far-right government was mainly taken up by indigenous communities and social movements. Recurring promises of land exploitation and pandering to agribusiness – the latter a major source of support for Bolsonaro – elicited a vociferous outrage from indigenous communities and environmentalists. Bolsonaro’s dictatorship nostalgia, both in rhetoric and action, further fomented the divide in Brazilian society.

However, the coronavirus pandemic has forced a different sort of reckoning among Brazilians, although the process may be temporary until an outcome is achieved. Bolsonaro’s mishandling of the pandemic happened amid growing accusations of corruption. A poll in July revealed that 54 percent of Brazilians would support the impeachment of Bolsonaro, while 51 percent disapproved of him, indicating growing resentment since his tenure started in 2019.

The statistics reflect a possible turning to the left, which is not impossible especially with the return of former president Lula da Silva to the political scene. Polls indicate a probable win for Lula in the forthcoming presidential elections. and Bolsonaro has already accused the Supreme Court of favoring his opponent.

Given the rise of the left in Latin America – Chile is the most prevalent example at the moment of the right wing’s spectacular fall – Bolsonaro is guaranteed U.S. support for the time being. In July, the Central Intelligence Agency (CIA) director William Burns met with Bolsonaro to discuss the political situation in Latin America, and the Brazilian leader specifically mentioned Venezuela, Bolivia, Chile and Argentina in comments discussing the visit.

COVID19 might trigger more widespread displeasure among Brazilians, but the military, as well as Bolsonaro’s neoliberal policies favoring privatization are also a force to be reckoned with. For a definite shift to occur, the left will have to continue leading the mobilization struggle in Brazil, which would then encourage the already occurring decrease in support for Bolsonaro, who has exploited the masses for the interests of the privileged.

But there are indications that, across Brazil, a more profound reckoning might be happening. Just as in Chile, the rise in transport fares triggered a vast outcry against right-wing President Sebastian Pinera, resulting in drastic losses for the right-wing and the rewriting of a new constitution to replace that of former dictator Augusto Pinochet, Brazilians may want to reconnect politically with their past.

The burning down of the statue of Borba Gato by a group of demonstrators recently; a memorial which represents the colonial violence which ravaged Brazil’s indigenous people, is a case in point. The action was intended to ignite debate about Brazil’s past and the glorification of the colonizers, but the action itself was powerful enough to steer political thought towards opposing Bolsonaro’s dictatorship nostalgia.

Brazil lags behind in terms of dictatorship memory and justice, and despite not having the highest death toll when it comes to dictatorship victims, 50,000 people were imprisoned and 10,000 forced into exile. Bolsonaro’s government abused the democratic mandate to recreate dictatorship oppression. COVID19 may well be the moment for political change in Brazil, yet the pandemic must not obscure the reasons behind the Brazilian people’s dissent.

0 thoughts on “Dissent against Bolsonaro Runs Deeper than COVID19 Mismanagement”