HOME / SOCIAL/CULTURAL / The Dawning of the Age of Nefarious 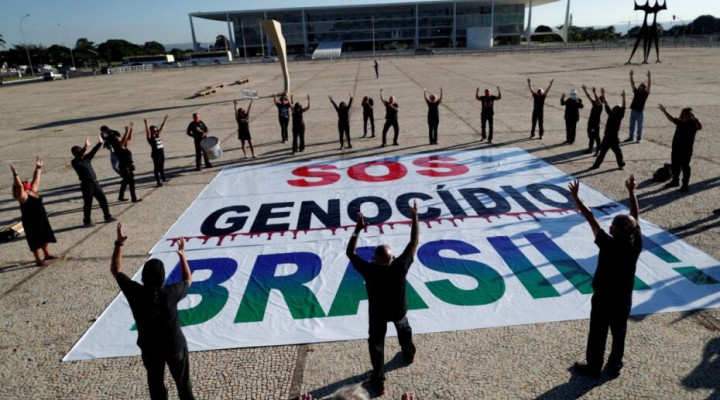 If Friedrich Engels were alive today, he would likely define the criminal neglect of Covid-19 by the like of Trump and Bolsonaro as “social murder”.

When governments were have expected to have stood up and displayed leadership during a catastrophic pandemic, certain leaders not only ignored the threat posed by the Covid-19 virus but advocated dangerous and ineffective “cures” and therapeutics that drove up an already astronomically high death toll. There are growing calls for criminal manslaughter charges to be brought against certain leaders in countries subjected to such nefarious and deadly Covid-19 actions. There have also been suggestions that because Covid-19 is a worldwide pandemic, those leaders who helped spread the virus through their malfeasance and inaction should be brought before an international tribunal.

At the top of the suspect list for facilitating a public health emergency that, at last count, saw 2.79 million deaths worldwide, with the United States topping the list at 549,000 and Brazil placing second at 312,000, are the respective leaders of those countries at the outset of the virus breakout. The actions of lack thereof by former U.S. President Donald Trump and Brazilian President Jair Bolsonaro enter the legal realm of criminal negligence and manslaughter, if not medical genocide, on a massive scale.

Among those calling for prosecuting Trump and others in his administration for criminally-negligent manslaughter is Democratic U.S. Representative Ilhan Omar of Minnesota. In December 2020, Omar reflected on how Trump’s criminal neglect affected her own family. She told MS-NBC, “My dad was in Kenya. He came back into the United States when COVID hit because he thought he was going to be safer here,” adding, “I know that my father and over 300,000 people have lost their lives to COVID because of dangerous criminal neglect by Trump and his administration.”

Those calling for Trump’s prosecution point to his February 7, 2020 remarks to Washington Post reporter Bob Woodward, in which Trump said that Covid-19 was “ deadly stuff,” and “five times more deadly than even your strenuous flus.” Yet, even after privately admitting the lethality of Covid-19, Trump told the public on February 27 that Covid-19 was “the same as the flu.” On July 4, 2020, Trump stated that “99 percent” of the Covid cases were “totally harmless,” another lie. Trump’s more ardent political supporters refused to socially distance, practice hygiene, and continued on as if there was no pandemic. That resulted in the United States having the world’s highest death count, something that points right back to Trump’s criminally negligent policies and false statements.

In July 2020, the UNISaúde network, an alliance of over one million Brazilian health care professionals, filed a complaint with the International Criminal Court in The Hague against Brazilian President Jair Bolsonaro. The complaint accused Bolsonaro of committing a crime against humanity by treating the Covid pandemic with “contempt, neglect, and denial.” It further contended that Bolsonaro’s urging Brazilians to take ineffective drugs like chloroquine and hydroxychloroquine, along with urging them to not wear masks, directly contributed to Brazil’s high death count, only second to that of the United States. In addition to the health care professionals, over 150 Roman Catholic bishops in Brazil signed an open letter that cited Bolsonaro for “systematically using unscientific arguments… to normalize a COVID-19 plague that is killing thousands, and to treat this as if it was an accident or divine punishment.” Bolsonaro and Trump, who have in common far-right politics and opinions, triggered what constitutes grounds to be charged with second degree murder. That is, a “depraved indifference to human life,” according to many criminal statutes.

If Friedrich Engels were alive today, he would likely define the criminal neglect of Covid-19 by the like of Trump and Bolsonaro as “social murder,” a term he coined in his 1845 opus, “The Condition of the Working-Class in England.”

Engels’s words in 1845 certainly describe the actions of Trump, Bolsonaro, and their advisers and administration members with regard to the present day:

“When one individual inflicts bodily injury upon another such that death results, we call the deed manslaughter; when the assailant knew in advance that the injury would be fatal, we call his deed murder. But when society places hundreds of proletarians in such a position that they inevitably meet a too early and an unnatural death, one which is quite as much a death by violence as that by the sword or bullet; when it deprives thousands of the necessaries of life, places them under conditions in which they cannot live — forces them, through the strong arm of the law, to remain in such conditions until that death ensues which is the inevitable consequence — knows that these thousands of victims must perish, and yet permits these conditions to remain, its deed is murder just as surely as the deed of the single individual; disguised, malicious murder, murder against which none can defend himself, which does not seem what it is, because no man sees the murderer, because the death of the victim seems a natural one, since the offence is more one of omission than of commission. But murder it remains.”

While Trump and Bolsonaro appear to be guilty of social murder, at least in the second degree, if not the first, what about other leaders who prescribed various ineffective tonics and other herbal remedies to combat Covid-19? A case of manslaughter against them might be successfully argued in a court.

Madagascar President Andry Rajoelina urged people to drink an herbal tonic called “Covid-Organics,” which is produced in his country from the Artemisia annua plant. Planeloads of Covid-Organics were delivered to Tanzania, Guinea-Bissau, Equatorial Guinea, and Liberia. Tanzanian President John Magufuli was one of the tonic’s proponents. He told the Voice of America in May 2020, “Now when the Madagascars [sic] claim that they have the medicine for coronavirus… now, the debate is: ‘Why should [we] not just support this innovation from our own continent?’ ”Magufuli’s question was answered on March 17, 2021, when he died from what was suspected to have been complications from Covid-19. At the very least, Rajoelina might be found guilty by a court of negligent manslaughter. But he would not be alone. Japanese Prime Minister Shinzo Abe pushed the anti-flu drug Avigan, which is produced by Toyama Chemical Company, a subsidiary of Fujifilm Holdings Corporation of Japan. The drug, also known as favipiravir, is known to cause birth defects and other serious side effects. In August 2020 and during a surge in Covid-198 cases in Japan, Abe suddenly resigned from office, citing his suffering from ulcerative colitis. One of the properties of Covid-19 is that it can exacerbate pre-existing conditions like colitis.

Among its many other crimes, the Central Intelligence Agency-installed military junta that ruled Bolivia from November 2019 to October 2020 promoted another unproven drug, ivermectin, as a cure for Covid-19. Ivermectin is an anti-parasitic worm drug that is mainly used to treat animals. After ivermectin was touted as a Covid-19 cure by the right-wing Bolivian regime’s Health Ministry, it found other enthusiasts in other Latin American countries governed by right-wing regimes, namely Brazil, Guatemala, and Peru.

Considering all of the possibly criminally negligent policies enacted by right-wing regimes to deal with Covid-19, the international court’s docket in The Hague could become as crowded as that in Nuremberg when the German Nazi leadership was brought to justice for their crimes against humanity.

0 thoughts on “The Dawning of the Age of Nefarious”