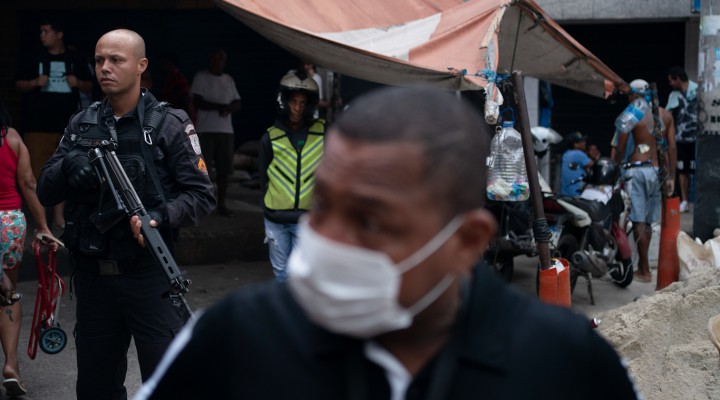 Brazil’s response has been so lackluster that in some areas, organized gangs are imposing their own curfews and lockdowns, saying “if the government won’t do the right thing, organized crime will.”

MPN– In what may be its darkest hour, Brazil is at the mercy of a deranged lunatic. This is no exaggeration, wrote independent outlet Brasil Wire yesterday. The country’s far-right President Jair Bolsonaro tested positive for COVID–19 on March 13, his son Eduardo confirming it to Fox News. The news came as no great surprise as 22 of the group who accompanied him on his visit to the United States also tested positive. While in Washington, Bolsonaro embraced Donald Trump and other senior American figures and on Monday, Bolsonaro’s driver was rushed to a hospital in Brasilia with severe respiratory problems.

Despite testing positive for the virus, just two days later Bolsonaro held a rally outside the presidential palace where he shook hands with supporters, posed for photographs with them and called for the closure of the Supreme Court and Congress, something he has been threatening to do since his election in 2018. The president and his son denounced the media for publishing fake news about his health, simultaneously claiming he had tested negative and that he was impervious to the “little flu” because of his “athleticism.”

As of Wednesday, Brazil officially has 2,274 confirmed cases of COVID–19, but as testing kits are hard to come by, that number is certainly an underestimate. And while the president holds large public rallies, regional leaders have acted more prudently. Yesterday, the governor of Sao Paulo state ordered a generalized lockdown of 46 million people in his state, with all non-essential businesses closed. The president condemned the move as a “hysterical” reaction.

Many other decisions by the president have made the situation in Brazil all the more worrisome.  There were around 10,000 Cuban doctors working across the massive country – primarily serving the poorest regions – at the time of his election. However, he expelled them on the grounds that they were not truly medical professionals, but ideologically brainwashed “terrorists” training Brazilians in communism. “The Workers’ Party sent about 10,000 costumed doctors to Brazil here, in poor places, to create guerrilla cells and indoctrinate people,” he said last year. Last weekend Secretary of Health Joao Gabbardo begged Cuba to return them. However, Cuba has already sent many doctors to other countries, including Italy, Venezuela, and Nicaragua. Ever since Workers’ Party president Dilma Rousseff was impeached in 2016, there has been a freeze in public health spending.

Faced with a central government that refuses to take action, Brazil’s criminal gangs, who control much of the country’s urban areas, have decided to pick up the slack, imposing curfews and lockdowns across their territory. “We want the best for the population. If the government won’t do the right thing, organized crime will,” read a communication from a powerful group of drug dealers in Rio de Janeiro. That organized crime syndicates are behaving more responsibly than the central government has not been lost on the population.

Gangs in the Rio de Janeiro favelas have enforced a lockdown from 8pm tonight. The statement reads: "If the government won't do the right thing, organised crime will" pic.twitter.com/dK0wtAR3KA

However, quarantining or self-isolating in the slums is an impossible task for many. The country’s slums, depicted in the 2002 movie City of God, are intensely overcrowded, with millions living in ramshackle buildings without the ability to isolate.

“It is impossible to remain in isolation. We are talking about regions where people live in shacks, where there is no way to isolate themselves. We are talking about a shack where, in one space, there is the kitchen, the living room and the bedroom. Almost nobody lives alone. There are at least two to three members in each family, living in a space that is the size of a room in a normal house,” said one resident of the real City of God slum, where COVID–19 has already reached.

The lack of running water is also a grave concern, making washing hands and other basic hygiene extremely complicated and fraught with difficulty.

Thus, the extreme inequality in Brazil will prove a catalyst for the disease and an impediment to its eradication. “The irony is that the disease was brought to Brazil by plane, by the rich, but it is among the poor that it will explode,” noted Paulo Buss, director of the Center for International Relations at Fiocruz, a public health research organization.

A close ally of Trump, Bolsonaro was elected in 2018 in a dubious election fraught with inconsistencies and fake news. The runaway favorite, Lula da Silva from the Workers’ Party, was arrested under false pretexts and jailed by a judge who would later become Bolsonaro’s Justice Minister. Worse still, leaked documents later revealed that the judge was secretly working with the prosecution to ensure Lula’s conviction. Brasil Wire describes the president’s ideology as, “Somewhere between the Malthusian philosophies of Northern Conservatives, the corporate eugenics of Wall Street, and the genocidal instincts of Neo Nazis.” The consequences of his election may be playing out in real time across the vast country of 209 million people.

Feature photo | A police officer stands in a small market as a local volunteer with a face mask distributes soap and detergent in an effort to avoid the spread the new coronavirus, in the Rocinha slum of Rio de Janeiro, Brazil, March 24, 2020. Leo Correa | AP