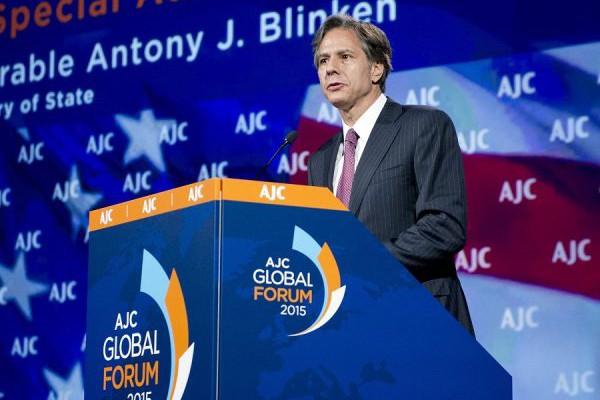 I for one am getting really excited by the staff that Honest Joe Biden is pulling together for the White House. When I first heard the name Tony Blinken during the Obama kleptocracy I assumed that he was one of those Ivy League lawyer types that proliferate in Washington, likely affiliated with the firm of Winken, Blinken and Nod, which we all know to be in partnership with Dewey, Cheatem and Howe. But I was wrong. He actually was affiliated to a much bigger fraternity, which one might call Zionists in government. You know, those nice well educated, always polite Jewish boys and sometimes girls who have self-designated as foreign policy experts and who work their way up through the various levels of power that might lead to the most coveted positions at the top in the state department and national security apparatus. Blinken was one such striver, and I began to feel the pricking in my thumbs that was telling me that something evil this way was coming when he was mentioned now and again as a former close adviser to the already beatified Barack Obama. And some in the media had observed with approval that he had more recently been briefing Joe Biden, particularly about Israel and the Middle East.

The question of withholding aid is itself moot as Israel does nothing but “do things” that damage U.S. interests, knowing that no president or the Congress would dare to turn off the money tap, but it is an interesting unambiguous admission from Blinken that both he and Joe Biden put Israeli interests ahead of those of the United States.

Blinken’s personal view of unfettered support for Israel allegedly derives from his stepfather having claimed to be a survivor of the so-called holocaust, a tale that he invoked several times during his acceptance speech on November 24th. The Times interview concludes with Blinken asserting that “One of the things that’s really shaped the vice president’s… career-long support for Israel and its security is the lesson of the Holocaust. He believes strongly that a secure Jewish homeland in Israel is the single best guarantee to ensure that never again will the Jewish people be threatened with destruction.”

The indefatigable Israel-firster Tony Blinken has also served as a “conduit” to those in government for Israel advocacy groups like the American Israel Public Affairs Committee (AIPAC). And now that we have Tony Blinken as Secretary of State Designate the door will soon be wide open to the Israel Lobby.

If you need to know more about what Tony Blinken is all about you only have to look at his friends and his track record. Israel was inevitably quick off the mark in saluting the appointment, both in its media and through its mouthpieces in the United States. Stalwart Canadian Zionist Mark Dubowitz, who heads the Foundation for the Defense of Democracies (FDD), tweeted that Blinken would be part of a “…superb national security team. The country will be very fortunate to have them in public service.”

The signal from FDD is particularly important as the organization is directed by the Israeli Embassy in Washington. FDD is the leading neoconservative bastion seeking a war with Iran, Israel’s bête noir. Its Leadership Council has featured former CIA Director James Woolsey, Senator Joe Lieberman, and Bill Kristol. Its advisors and experts are mostly Jewish and most of its funding comes from Jewish oligarchs.

A recent expose by al-Jazeera exposed how FDD and other Lobby groups work directly with the Israeli government, collecting information on U.S. citizens, spying on legal organizations, and both planning and executing disinformation at Israeli direction, making it an Israeli agent by the definition of the Foreign Agents Registration Act of 1938 (FARA). Unfortunately, the Department of Justice has never sought to compel FDD to register under FARA. In fact, the U.S. government has never compelled any part of the vast and powerful Israel Lobby to register.

Tony, inevitably a Harvard graduate plus a JD from Columbia who has never served in the U.S. military, is inevitably a chicken-hawk because that is what America’s Zionists and their political neocon wing are made of. It is a phenomenon that has often been noted. In 2017, Israel’s Deputy Prime Minister Tzipi Hotovely called out American Jews as “people that never send their children to fight for their country, most of the Jews don’t have children serving as soldiers, going to the Marines, going to Afghanistan, or to Iraq. Most of them are having quite convenient lives…” Of 1,300,000 active duty personnel in the U.S. armed forces, only 4,515 are Jewish.

This is how it works: instead of actually fighting in the wars you are promoting, you have your tax-exempt “educational foundations” pour tons of money into a project to go to war and corrupt the politicians to issue the necessary orders so unemployed kids from Arkansas and North Dakota can go off and die for Israel. You yourself remain safe at home, free to deliver bellicose speeches about how Iran threatens the world through its “meddling” in the Middle East. And, of course, about how the dumbass Palestinians have failed to accept the hand of Israel offered in peace.

That is what Tony’s record demonstrates. Blinken has come a long way with Biden, all the way back to the Clinton Administration. And he he has always been there for the Jewish state. During the Obama Administration when relations with Israel were often strained, Blinken was the contact point for “Jewish leaders [differentiating] him from others in the White House at the time who weren’t as sympathetic to Israel’s position.” Dennis Ross, often described as Israel’s lawyer, praises him for having “…an instinctive emotional attachment to Israel,” referring to Blinken’s frequently cited Jewish and refugee roots.

Other media reporting indicates that “Blinken was a top aide to Biden when the then-Sen­a­tor vot­ed to autho­rize the U.S. inva­sion of Iraq, and Blinken helped Biden devel­op a pro­pos­al to par­ti­tion Iraq into three sep­a­rate regions based on eth­nic and sec­tar­i­an iden­ti­ty. As deputy nation­al secu­ri­ty advis­er, Blinken sup­port­ed the dis­as­trous mil­i­tary inter­ven­tion in Libya in 2011, and in 2018 he helped launch Wes­t­Ex­ec Advi­sors, a ​‘strate­gic advi­so­ry firm’ that is secre­tive about its clients, along with oth­er Oba­ma admin­is­tra­tion alum­ni like Michèle Flournoy. Jonathan Guy­er writes in The Amer­i­can Prospect, ​‘I learned that Blinken and Flournoy used their net­works to build a large client base at the inter­sec­tion of tech and defense. An Israeli sur­veil­lance start­up turned to them. So did a major U.S. defense com­pa­ny.”

Beyond the intersection of government policy and personal profit exhibited by Blinken, the Washington Post in 2013 described Blinken as “[o]ne of the government’s key players in drafting Syria policy” and he recalled that “This is a little bit personal to me, and any of us — and I start with myself — who had any responsibility for our Syria policy in the last administration has to acknowledge that we failed. Not for want of trying, but we failed.” What Tony failed at was overthrowing Syria’s legitimate government and turning the country over to the terrorist linked groups that he and Hillary and Obama were supporting.

The Democrats are particularly good at coming up with secretaries of state that one would like to forget, and that is saying quite a lot given the recent appointees by the Republicans. One recalls immediately the big-hearted Madeleine Albright, who found the killing of 500,000 Iraqi children by sanctions “worth it,” or Hillary Clinton, who laughed out loud as she recalled the death of Libya ruler Muammar Ghaddafi by having a bayonet inserted up his anus. Clinton, who more than anyone launched the war against Africa’s most developed nation, paraphrased Julius Caesar, who, upon returning from a rapid victory in Asia during the Rome’s Second Civil war, described the event as “Veni, vidi, vici,” in English “I came, I saw, I conquered.” For the laughing Hillary it was “I came, I saw, he died!” The anarchy in Libya persists to this day and it included the payback killing of four U.S. Embassy employees in Benghazi in 2012, with Hillary and Susan Rice at the helm. It is generally believed that both Clinton and Rice might well have senior positions in the incoming Biden Administration.

But back to Blinken. Israel loved the way the Trump Administration showered favors upon it, nearly always without any quid pro quo. But for all his Dispensationalist fervor, salesmen like Secretary of State Mike Pompeo were little more than goys who had been seduced by the myth of Israel. They were, as Lenin would have described it, little more than “useful idiots,” which is allegedly an expression that certain Israeli politicians have used to describe their passionate Christian Zionist supporters in the U.S. Now, with Blinken, the Israeli hard liners will have the “real thing,” a convincing Jewish boy who fatuously describes an apartheid Israel as “the anchor and foundation for democracy in the region.” Tony believes in the Zionist cause and will do the Jewish state’s bidding with a malleable Joe Biden. And if Joe should go, there is always Kamala Harris, who is married to a Jewish lawyer lobbyist. Win-win either way.

Even though it’s early days, Blinken joins a number of other American Jews already tagged for senior positions, including Alejandro Mayorkas, the nominee for Secretary of Homeland Security who is a Latino Jew. Ron Klain, Biden’s Chief of Staff and Janet Yellen, his pick for Treasury Secretary, are also Jewish. The liberal Israeli newspaper Haaretz reports how “Having Jewish men and women in prominent government positions is so standard that it’s barely even a talking point…” before observing that “The fact that some of President-elect Joe Biden’s top cabinet picks are Jewish should be a source of pride for the community…‘These people are being chosen because they’re incredibly competent, because they’re incredibly talented, because they’re incredibly experienced,’ Anti-Defamation League CEO Jonathan Greenblatt told Haaretz in a phone interview.” Indeed, if one believes Greenblatt pressure from the Israel Lobby, the media and billionaire donors as well as networking by the Jewish mafia inside the government itself have nothing to do with it.