HOME / WORLD / Surprise! America Is Getting Another Psycho For Secretary Of State 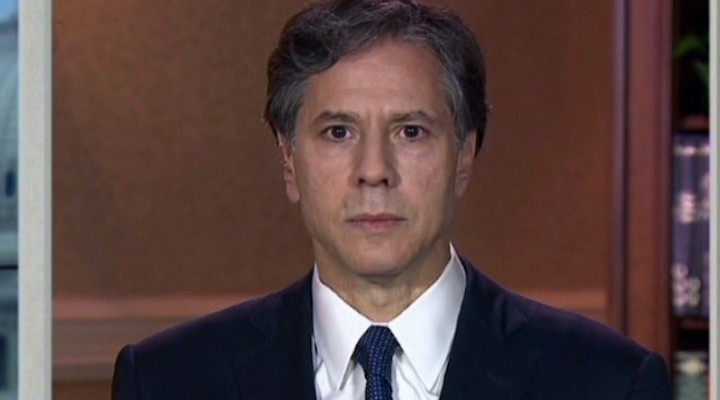 Blinken is a liberal interventionist who has supported all of the most disgusting acts of US mass military slaughter this millennium, including the Iraq invasion.

Did you know the US Department of Defense used to be called the Department of War? It would be a much more honest label today for a military which virtually never operates in any way that could be described as defensive, with its operations focusing far outside of the nation’s borders against targets who pose no threat whatsoever to ordinary Americans. An even more suitable name would be the Department of Eternal War.

The State Department was meant to be the counterpart to the War Department, focusing on diplomacy and peace. What ended up happening as the US government morphed into a globe-spanning empire dependent on endless violence and aggression is that the State Department wound up focusing more and more on manufacturing interventionist narratives on the world stage to gin up international support for starvation sanctions, proxy wars and war coalitions.

So in practice the US ended up with two war departments: the DoD and the State Department. Which is why you’ve seen the nation’s Secretaries of State becoming more and more jingoistic and psychopathic, to the point where some sort of antisocial personality disorder is almost a job requirement for the position.

Breaking News: President-elect Joe Biden is expected to nominate Antony Blinken, a defender of global alliances and a close adviser, as secretary of state. https://t.co/IzeynG9AUH

Bloomberg and The New York Times are reporting that the incoming presidential administration has chosen longtime Biden advisor Tony Blinken for the role of Secretary of State. Blinken is a liberal interventionist who has supported all of the most disgusting acts of US mass military slaughter this millennium, including the Iraq invasion which killed over a million people and ushered in an unprecedented era of military expansionism in the Middle East. So needless to say he will fly through the confirmation process.

“Blinken was a key adviser to Biden when the senator voted to authorize the use of force against Iraq,” Nonzero reports. “Blinken has tried to recast the vote as merely ‘a vote for tough diplomacy,’ but post-invasion remarks by Biden make that claim implausible. In a recent Washington Post op-ed that Blinken co-authored with Robert Kagan, one of the chief architects of neoconservative foreign policy doctrine, he implied that the problem with the Iraq War was poor execution (‘bad intelligence, misguided strategy and inadequate planning for the day after’) rather than the very idea of invading a country in violation of international law even after it had admitted weapons inspectors to assess the claims motivating the invasion.”

How true can Biden’s claim be that he regrets his pivotal role in facilitating that unforgivable act of mass military butchery if he’s continued employing the man who advised him about it as an advisor ever since, and is now appointing him to Secretary of State? If someone advises you to do something that you truly regret, do you continue seeking out that person’s advice on the same subject and give them even more power and control over it?

We can expect the next secretary of America’s second war department to help the US death machine ramp up world-threatening cold war escalations with China and Russia. In a July interview with Blinken, The Wall Street Journal‘s Walter Russell Mead was told of the Biden campaign’s plan to “tame China, Russia and woke Democrats” using “Cold War-era Democratic policy”, including “a liberal multilateralism—supplemented when absolutely necessary by the American military and a willingness to use it.”

All you really need to know about Tony Blinken has been summed up nicely in a must-see new Behind the Headlines report by Dan Cohen. Blinken’s career has been a pendulum between expanding the US empire and helping corporate power knit itself more deeply into that empire. Within the Obama administration he backed the unforgivably devastating interventions in Libya and Syria as well as the 2014 Ukraine coup, he was a major proponent of backing the Saudi-led mass atrocities in Yemen, and he says such proxy conflicts will be the new model for US interventionism going forward.

Cohen quotes Blinken arguing in favor of replacing old-school Bush-era conventional ground invasions with “discreet, small-scale sustainable operations, maybe led by special forces, to support local actors… In ending the endless wars I think we have to be careful to not paint with too broad a brush stroke.” In other words, the continuation and expansion of all of the Obama administration’s most depraved policies.

So we can expect a strengthening of the python-like strangulation strategies the US empire now favors, with the same number of dead children, the same amount of destabilization and suffering, and the same amount of resource consumption, just without all those pesky news headlines and footage of flag-draped coffins coming home on jet planes. A photogenic mask on the blood-spattered face of the US empire which has been so troublingly exposed in the age of Trump.

Are you excited about that Return to Decency yet?

0 thoughts on “Surprise! America Is Getting Another Psycho For Secretary Of State”