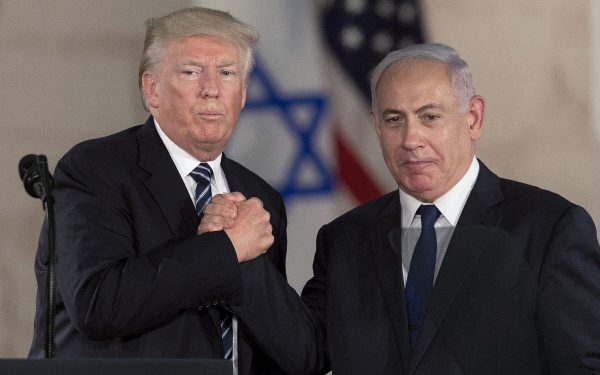 Netanyahu’s every wish is granted

President Donald Trump’s gifts to Israel in the last few weeks of his administration are, quite frankly, incomprehensible based on any consideration that U.S. foreign policy should be reflective of American national and international interests. On the contrary, the nearly worldwide assessment of the United States as a completely rogue nation headed by someone who is quite plausibly insane and led by the nose by Israel has done considerable damage to America’s ability to lead on important issues like nuclear proliferation and climate change.

Much of the bad decision making by Trump is derived from his having bought into the Israeli view of Iran, which, in reality, does not threaten Americans or U.S. interests. On his recent visit to Israel, Secretary of State Mike Pompeo added new sanctions against Iran while also releasing a State Department statement defending Trump’s “maximum pressure” against the Islamic Republic. He boasted about the damage being done to the Iranian economy: “The Maximum Pressure campaign against the Iranian regime continues to be extraordinarily effective. Today, Iran’s economy faces a currency crisis, mounting public debt, and rising inflation. Prior to the Maximum Pressure campaign, Iran was exporting nearly 2.5 million barrels of oil per day. Now it struggles to export even a quarter of that volume.”

Hostility towards Iran also means continuing a military presence in Syria, an Iranian ally, as well as in Iraq, which has a largely Shi’a government that is friendly to Iran. Whatever troop withdrawals Trump is envisioning between now and the time he leaves office will certainly not include Syria and he will surely be leaving a considerable presence in Iraq, deferring to Israeli interests.

Trump and Secretary of State Mike Pompeo have doubled down on pleasing Israel even though Israeli Prime Minister Benjamin Netanyahu was quick off the mark in acknowledging that Joe Biden had indeed won the presidential election. Netanyahu was able to do so because he knows that his influence over the White House is matched by his ability to get favors from both major parties in the U.S. Congress. And if all else were to fail, unlikely as that is, the Israeli leadership is confident that it can make the American media dance to its tune. In other words, no matter what Netanyahu does vis-a-vis the U.S. election, Israel would find itself well positioned to manipulate America’s foreign policy to favor its own interests.

Pompeo’s latest and just concluded trip to the Middle East involved the usual stops in Israel to be given his marching orders but he also was bearing gifts. His visit was clearly intended to deliver the message that as far as the Trump Administration is concerned Israel can do whatever it wants relating to the Palestinian West Bank, which is now home to 700,000 illegal settlers. Pompeo accomplished that part of his mission in two ways. First, he visited both the annexed Golan Heights as well as an illegal Israeli settlement at Qasr el Yahud on the Jordan River. He also stopped at a winery located on land blatantly stolen from Palestinians, whose Florida based Jewish “owners” had previously named a wine in his honor. It was the first time that an American Secretary of State had visited a settlement, and it was a signal that Washington no longer regards the exclusively Jewish enclaves as an obstacle to peace and no longer considers them illegal.

Second, Pompeo, while in Israel last Thursday, made two significant statements regarding U.S. policies on Israel and the Palestinian territories, revealing stronger support for Israel’s presence in the West Bank. He said that as a result of the State Department taking a “reality-based foreign policy approach,” products exported to the U.S. from the illegally occupied territory shall be marked as Israeli.

He elaborated “In accordance with this announcement, all producers within areas where Israel exercises the relevant authorities – most notably Area C under the Oslo Accords - will be required to mark goods as ‘Israel’, ’Product of Israel’, or ‘Made in Israel’ when exporting to the United States.” In other words, the United States is now endorsing the reality that much of the formerly Palestinian West Bank – Area C comprises 60% of it – is now both de facto and de jure part of Israel.

The move was immediately denounced by former Palestinian Chief Negotiator Hanan Ashrawi as “…an attempt to legitimize the theft of Palestinian land and plunder of Palestinian resources that runs counter fundamental principles of international law and the global consensus.” And so it is, but it was followed by a second statement which no doubt pleased the Israelis but which should concern all Americans who are troubled about the dramatic erosion of free speech in the United States.

Pompeo, standing next to Netahyahu, said the Boycott, Divestment and Sanctions (BDS) movement was “a cancer” and anti-Semitic, adding the U.S. would work to stop its funding. Netanyahu called the move “wonderful.” Formed in 2005, BDS is non-violent. It is active in many countries around the world and calls for a total boycott of Israel, including cultural, economic and academic activities, over the brutal Israeli repression of the Palestinian people.

Pompeo personally pledged the U.S. government decision to “…immediately take steps to identify organizations that engage in hateful BDS conduct and withdraw U.S. government support for such groups. We want to stand with all other nations that recognize the BDS movement for the cancer that it is.”

An accompanying State Department press statement issued by Pompeo elaborated that “It is the policy of the United States to combat anti-Semitism everywhere in the world and in whatever form it appears, including all forms of discrimination and hatred rooted in anti-Semitism. The United States strongly opposes the global discriminatory boycott, divestment, and sanctions (BDS) campaign (Global BDS Campaign) and practices that facilitate it, such as discriminatory labeling and the publication of databases of companies that operate in Israel or Israeli-controlled areas. As we have made clear, anti-Zionism is anti-Semitism. The United States is, therefore, committed to countering the Global BDS Campaign as a manifestation of anti-Semitism. To advance this policy, I have directed the Office of the Special Envoy to Monitor and Combat Anti-Semitism to identify organizations that engage in, or otherwise support, the Global BDS Campaign. In identifying such organizations, the Office of the Special Envoy will consider whether an organization is engaged in actions that are politically motivated and are intended to penalize, or otherwise limit, commercial relations specifically with Israel or persons doing business in Israel or in any territory controlled by Israel.”

The Pompeo statement is a declaration of war against a non-violent group that seeks to bring about change through peaceful means. Many U.S. states have already taken steps to punish BDS and its supporters and there is legislation in Congress that will make it guilty of hate speech as well as anti-Semitism due to its criticism of the Jewish state. The legislation includes substantial fines and prison time. In France, for example, it is already illegal to advocate a boycott of Israel.

While Pompeo was in Israel, lest there be any doubt about the Trump Administration’s love for the Jewish state, the president himself, speaking from Washington, announced that Sudan would be establishing diplomatic relations with Jerusalem. He added that many more countries would be doing likewise in the next two months. That Sudan made its decision under intense American pressure and due to suffocating sanctions imposed by Washington was not mentioned by President Trump.

Trump also responded favorably to another request from Netanyahu. Last Friday his Justice Department blocked any extension of the travel limitations imposed by the terms of the parole of convicted Israeli spy Jonathan Pollard. The move came over the objections of many in intelligence and national security communities, but was intended to please Israel. Pollard, a former Navy intelligence analyst, is now free from any travel restrictions and will move to Israel, where he is regarded as a hero and has been granted citizenship in absentia. He was the most damaging spy in U.S. history, having revealed top secret information on U.S. intelligence sources and communications, some of which was passed on to the Soviet Union by Israel in exchange for allowing the emigration of Russian Jews.

It is being argued that both Trump and Pompeo have ulterior motives for expressing their warm feelings towards Israel and all its works. Pompeo would like to be the GOP presidential candidate in 2024 and Trump would like to retain his control over the party. Either would benefit from the powerful support of the Israel Lobby in the United States and through solidifying their positions as being among the greatest friends of the Jewish state. The tragedy is that what benefits two more politicians on the make has absolutely nothing in it for the American people. And from Joe “I’m a Zionist” Biden we certainly can expect more of the same, both because the outgoing Trumpsters are creating a web of complications around what is taking place both with Iran and Israel that will be difficult to unravel and because the new president would fear taking any steps not approved by Netanyahu.

0 thoughts on “Trump Administration Displays Its Love for Israel”