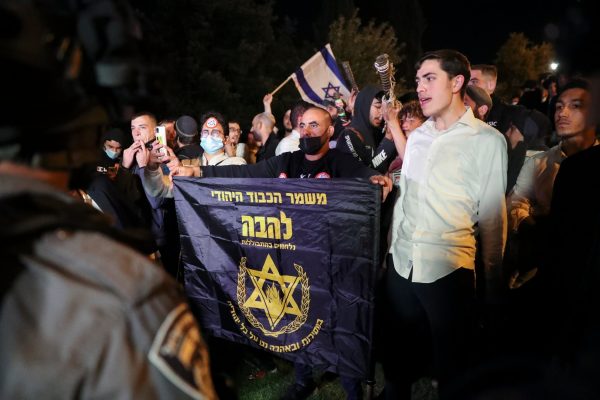 Last week there were some interesting stories that were very definitely underreported partly due to the fact that the mainstream media was heavily into the distraction provided by its beatification of George Floyd. For example, the tale of how a mob consisting of hundreds of Israeli Jews, composed mostly of settlers and the extremist so-called Kahanists, rampaging through Jerusalem and calling for “Death to Arabs,” was largely ignored. Right-wing Israeli lawmaker Itamar Ben-Gvir sent a message to the settlers, encouraging participants to “hang Arabs.” One member responded to the advice to bring their firearms with them with “We’re burning Arabs today, the Molotov cocktails are already in the trunk.”

In spite of the extreme violence and racism behind the attacks, the story did not seem to interest the disproportionate number of Zionists among American news editors and reporters. Along the way, the angry Jews beat Palestinians and attacked their homes and businesses in one of the Old City’s remaining Arab neighborhoods Sheikh Jarrah.

Attacks on Palestinians, to include their homes and livelihoods have been increasing in Jerusalem and on the occupied West Bank over the past several months without any intervention by Israeli police. The settlers were reportedly part of a right-wing Israeli group called Lehava which organized the violent demonstration with the objective of “restoring Jewish dignity” by “breaking the faces of Arabs.” Lehava claimed it was only avenging alleged attacks on Jews by Palestinians in and around Jerusalem, but most reports indicated that recent violence was instead caused by small groups of Jewish teenage boys looking for trouble.

During the rioting, Israeli soldiers and police made some arrests but primarily attacked the Palestinian civilians, including children, and some Jewish counter-protesters, with ‘skunk water’ sprayed from trucks, water cannon, tear gas and rubber-coated steel bullets. 105 Palestinians were injured and 22 remain in the hospital. One Palestinian was shot in the head by an armed border policeman who fired into the counter-demonstrators and there are unconfirmed reports that at least four more Arabs died.

In a normal world and if the United States had a normal government that adhered to some kind of moral compass, there might have been a protest coming from the President Joe Biden administration or from the “people’s house” Congress, but there was nary a whimper. On the contrary, though the Congress was thinking about Israel, it was looking in a different direction, towards those whom Prime Minister Benjamin Netanyahu has declared to be the enemies of his country. The attacks took place on April 22nd, ironically the same day that Congressmen Ted Deutch and Michael McCaul released a letter that they had sponsored. The letter was intended to stop dead any consideration that the United States just might condition its billions of dollars in largesse to the Jewish state annually based on Netanyahu and his band of war criminals restraining themselves just a bit.

Such a possibility has been raised by Senators Elizabeth Warren and Bernie Sanders, along with a handful of other brave legislators, who expressed concern that Israel will act without restraint as long as it knows that its money from Washington will continue to flow. In particular, Israel is currently pressuring Congress and using its media clout to oppose any re-entry by the US into the multilateral agreement to limit and inspect Iran’s nuclear development program, which Biden is just possibly intending to do. The previous agreement, which was being observed by Iran, became largely a dead letter when President Donald Trump, acting on behalf of major Jewish donors to the GOP as well as his neocon advisers, withdrew from the existing plan, the JCPOA, in 2017.

The letter was signed by 330 Congressmen, roughly half Republican and half Democratic, which is nearly two-thirds of the House and Senate. It begins with “As the United States meets pressing global challenges, we strongly believe that robust U.S. foreign assistance is vital to ensuring our national security interests abroad. One program that enjoys particularly strong bipartisan backing and for which we, Democrats and Republicans, urge your continued strong support is the full funding of security assistance to Israel.” The usual balderdash follows, about how “Israel continues to face direct threats from Iran and its terrorist proxies… Our aid to Israel is a vital and cost-effective expenditure which advances important U.S. national security interests in a highly challenging region.”

Sure it does, just ask the victims of the Israeli attack on the US naval vessel the USS Liberty in June 1967, which killed 34 sailors and injured 171 more. But no matter. The only things missing from the letter was the boilerplate assertion that Israel is America’s best friend in the whole wide world, which is obligatory in such documents, probably because everyone in Congress has already agreed to that. One also has to wonder why the other 205 Congressmen didn’t sign the letter, which is also obligatory, and one has to assume that their mothers had just died or something similar.

The letter also recalls how “President Biden has stated, ‘I’m not going to place conditions for the security assistance given the serious threats that Israel is facing, and this would be, I think, irresponsible’” before adding that “Reducing funding or adding conditions on security assistance would be detrimental to Israel’s ability to defend itself against all threats.”

The American Israel Public Affairs Committee (AIPAC), regarded as the most visible component of the Israel Lobby, was very pleased with the letter. Its spokesman Marshall Wittmann told the Jewish Insider website that the letter is “a very strong bipartisan statement that full security assistance to Israel – without additional conditions – is in the national security interest of the United States.”

Just once it might be nice to see someone in Congress or the White House concede that tying one’s security arrangements to a nation that most of the world considers “rogue” is not exactly a smart thing to do, but it all depends on how one defines smart. Smart for a congressman on the make is to have the Jewish dominated media and the invincible Israel Lobby on one’s side. Smart is to receive a pat on the head from AIPAC. It should be noted, of course, that the letter and the commentary surrounding it make no reference to the behavior of the rampaging Jewish mobs in Jerusalem that were out for blood, even though that was taking place as the document was being released to the media.

In addition to the “threat” posed by legislators like Sanders and Warren, the letter was clearly intended to meet a challenge coming from Congresswoman Betty McCollum, who has twice sponsored legislation forbidding the Israeli use of American financial aid to torture Arabs and, in particular, to beat and imprison Palestinian children. Her legislation the Promoting Human Rights for Palestinian Children Living Under Israeli Military Occupation Act​ H.R. 2407 amends a provision of the Foreign Assistance Act known as the “Leahy Law” to prohibit funding for the military detention of children in any country, including Israel. McCollum argues that an estimated 10,000 Palestinian children have been detained by Israeli security forces and prosecuted in the Israeli military court system since 2000. These children between the ages of 11 and 15 have sometimes been tortured using chokeholds, beatings, and coercive interrogation.

The Deutch-McCaul letter not coincidentally appeared less than a week after McCollum joined by 15 progressive Democrat co-sponsors submitted her bill, which admittedly is unlikely ever to emerge from committee for a vote. As of September 2020 there were an estimated 157 children still detained in Israeli prisons and, though it would be difficult to break down the money to Israel which is advanced in a lump sum, one would think the objective to be an admirable one to anyone but the always on-alert and powerful Israel Lobby.

The pledge by Congress together with its clear message that behind it there are enough votes to override any White House attempt to cut the aid, is also intended to send a warning to another perceived threat to Israel, that of the growing non-violent Boycott, Divestments and Sanction movement (BDS). The movement, which is particularly strong on college campuses, is being de facto criminalized in states all over the country, 26 at least and counting, and there are also Congressional bills that would possibly make the issue of boycotting Israel a felony with serious jail time and fines attached.

The overriding message is that Israel’s friends in the United States, and also in countries like Britain, France and Canada, are too strong to confront. In this case, the obvious racism and resort to lethal violence by the large component of the Israeli population should be resonating with a congress and media due to the recent convulsions being experienced here at home. Indeed, most of the “opinion makers” are jumping on the BLM bandwagon. This cheerleading for BLM is ironically highly visible in the actions taken by leading Israeli advocacy groups like AIPAC and the Anti-Defamation League (ADL), but that does not mean that there is any empathy to share for the plight of the Palestinians. Indeed, they are steps taken to get close to blacks to contain any possible pro-Arab sentiment.

A humane response to the suffering of the Palestinians does not surface much in the US because, frankly, Israel and its supporters have assiduously bought control of the US media as well the White House and Congress to such an extent that they can get what they want and never be challenged. That, of course, must end but the real question is how do we accomplish that when we the people have been effectively disenfranchised on the issue. When your government has been bought and your free speech limited by the oligarchs who control what passes for news and information, where do you go? Indeed, that is the dilemma.