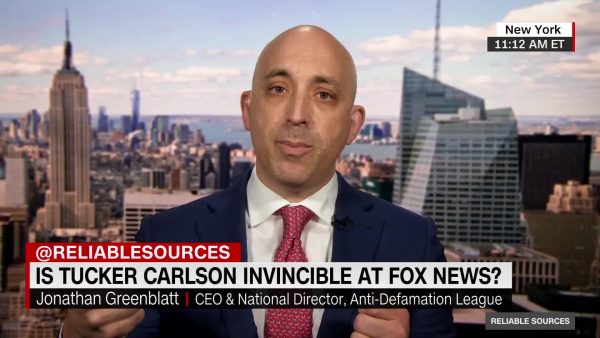 Jewish establishment embraces immigrants but only in America
Well, the cat is finally well and truly out of the bag when it comes to Israeli and organized Jewry’s hypocrisy. The unprincipled attack on Tucker Carlson by the Anti-Defamation League (ADL) over his alleged “white supremacism” included a demand to Fox News that he be fired. It was from a familiar playbook that groups like ADL and the rest of the Israel lobby use almost always successfully to vilify and silence critics in the media, academia and in politics. It works because it condemns legitimate dissent using the usual buzz expressions “anti-Semitism” and “holocaust denial” if all else fails.

Carlson argues that the Democrats are opening the country’s borders to potentially millions of illegal immigrants while simultaneously establishing a national voting system that requires no documentation or evidence of citizenship to create a new reality in the United States. He observes that every new voter shifts the balance in elections, detracting from the votes of existing citizens be they white, black or Asian. He calls this process the “Great Replacement,” which will create a society consisting of ultra-wealthy plutocrats at the top, tied to and relying on the corrupt Democratic Party and its dependent mass of “new citizen” voters for political legitimacy.

Tucker has carefully observed that the change will affect all existing voters, whatever their race, but critics have focused on the implication that the mass immigration he is warning against consists of people of color, so they have imputed a racist motive. But either way, it all basically means that existing voters will lose their clout when replaced by more numerous newcomers as part of a deliberate Democratic Party effort to replace much of the electorate. And that could mean more ominously that something like a civil war could be developing, pitting existing citizens fearful of being effectively disenfranchised against non-native born newcomers who are expected to tip the balance in government permanently blue, as has already happened in states like California. One can disagree with Tucker Carlson on his analysis, but he has made the case that the change will be catastrophic for many American citizens cogently and clearly.

And there is of course the Jewish and Israel angle to it all. Jewish organizations with certain exceptions tend to lean hard left when it comes to domestic politics in the US except when progressive policies conflict with their own interests. That means that they have aligned themselves with groups like Black Lives Matter (BLM) and have also gotten behind the liberal immigration policies of the Joe Biden administration. In fact, some of the most outspoken journalists and politicians on both racial and immigration issues are Jews, include Michelle Goldberg, whose recent NYTimes op-ed, “We can replace them,” praises the new immigrant America, noting that many states are on the verge of a racial flip. She wrote “The potential is there; Georgia is less than 53 percent non-Hispanic White.” Neocon Max Boot, a Jewish-Russian opinion writer for the Washington Post, also chimed in, blasting what he called Carlson’s “odious aspersions” on immigrants.

Interestingly, the involvement of Jewish groups in the United States as prominent supporters of BLM’s apparent mission to upend what used to pass for America’s European-derived culture includes limiting free speech, democracy and mercantilism, all of which have greatly benefited Jews. The narrative is, of course, being wrapped around the claimed common cause of blacks and Jews together fighting against the alleged white nationalists who are being blamed by the media for much of the violence taking place even when videos taken at the scenes of the rioting definitely show nearly all black mobs doing the arson and looting.

Uniquely, more than six hundred Jewish groups have signed on to a full page newspaper ad supporting the BLM movement. The ad says “We speak with one voice when we say, unequivocally: Black Lives Matter” and then goes on predictably to assert “There are politicians and political movements in this country who build power by deliberately manufacturing fear to divide us against each other. All too often, anti-Semitism is at the center of these manufactured divisions.”

And blacks who are skeptical of the Jewish role are quickly put in their place, as was Rodney Muhammad of Philadelphia, who was removed from his executive position with the NAACP after expressing skepticism about all the Jewish friends that blacks suddenly appeared to be acquiring, quoting an observation often attributed to Voltaire on a Facebook entry, “To learn who rules over you, simply find out who you are not allowed to criticize.” More recently, Florida high school Principal William Latson was relentlessly hounded and eventually fired after he allegedly emailed that he did not think the standard holocaust narrative was historical fact.

The lead organization in shaping the acceptable narrative is the Anti-Defamation League (ADL), which promotes itself as “Fighting Hate for Good.” In other words, anyone on the other side of the narrative is by definition a “hater.” The ADL attack on Carlson is, however, particularly interesting in that it has avoided the usual behind the scenes threatening confrontations that Jewish groups seem to favor. As Tucker is Fox’s top commentator and he has not backed down, the fight has been out in the open and has brought to the fore open discussions of issues that ADL likely would have sought to avoid, to include Jewish hypocrisy.

Tucker did not directly address Greenblatt in his rebuttal, but anyone following the discussion would have known whom he was referring to. Since confronting powerful Jewish organizations in the media is normally unheard of in the US it was more than refreshing to hear his implicit indictment of Jewish hypocrisy in claiming the racism-immigration moral high ground in America while at the same time supporting Israel’s racist immigration policy because it might threaten the interests of the country’s dominant Jewish population.

The acrimonious exchange began immediately after Carlson’s first monologue on the replacement issue, which took place on April 8th. This resulted in a tweet from Jonathan Greenblatt, Director of ADL, “…’replacement theory’ is a white supremacist tenet that the white race is in danger by a rising tide of non-whites. It is antisemitic, racist and toxic. It has informed the ideology of mass shooters in El Paso, Christchurch and Pittsburgh. Tucker must go.” It was followed by a letter from ADL to Fox News CEO Suzanne Scott that stated “Carlson’s full-on embrace of the white supremacist replacement theory on yesterday’s show and his repeated allusions to racist themes in past segments are a bridge too far. Given his long record of race-baiting, we believe it is time for Carlson to go.”

FOX CEO Lachlan Murdoch responded to Greenblatt with a cringe-worthy letter, though he did not agree to fire Tucker: “Fox Corporation shares your values and abhors anti-semitism, white supremacy and racism of any kind. In fact, I remember fondly the ADL honoring my father with your International Leadership Award, and we continue to support your mission.” This produced a riposte by Greenblatt “As you noted in your letter, ADL honored your father over a decade ago, but let me be clear that we would not do so today, and it does not absolve you, him, the network, or its board from the moral failure of not taking action against Mr. Carlson.”

A reader of a previous article on this site suggested that Murdoch should have responded to Greenblatt with a comment that is hard to improve upon:

“…Fox Corporation does not share your values and abhors your anti-gentilism, Jewish supremacism, hypocrisy and double standards. In fact we urge you to stop subverting our society, leave our country and go to Israel, where there is real work to do in combating racism. We are not your slaves and will not obey any order from your side. Your organization was founded to protect a Jewish criminal who had raped and murdered a 13 years old girl. Thus from the very beginning your organization was morally compromised. Ever since you have endeavored to undermine our society while promoting Jewish criminal interests. The greatest service you could do to our nation is leaving us for good…”

With Fox’s somewhat tepid support, Tucker also did not back down. He responded to the ADL attack by producing screenshots of the organization’s website, which discussed Israel’s status, including: “With historically high birth rates among Palestinians, and a possible influx of Palestinian refugees and their descendants now living around the world, Jews would quickly be a minority in a bi-national state, thus ending any semblance of equal representation and protections. In this situation, the Jewish population would be politically—and potentially physically—vulnerable. It is unreasonable and unrealistic to expect the Jewish population to expect the state of Israel to voluntarily subvert its own sovereign existence and national identity and become a vulnerable minority in what was once its own territory.”

Tucker made the point that apparently what is good for Israel is not allowable for the United States. American Jews are undeniably the leading political force trying to create a multicultural United States, while hypocritically believing that their co-religionists should retain all power in Israel because ceding any sovereignty to Arabs would be dangerous for Jews. This is beyond hypocritical, as Tucker suggests, and he invited Greenblatt on come onto his show to explain why the same principles that he promotes for Israel should not exist for the United States.

One final point, the furor over Tucker Carlson has energized some of the many American Jews who are tired of the hypocrisy displayed by ADL and other Jewish organizations. Allan Brownfeld, writing for the Washington Report, observes how they have begun to use the expression “apartheid” when describing the status quo in Israel. Some others have rejected the political activism of Greenblatt and ADL. The Coalition for Jewish Values sent ADL a letter saying: “The Coalition for Jewish Values, which represents over 1,500 traditional, observant rabbis in American public policy, is distressed by grossly misplaced charges of antisemitism made by your organization. Your recent attack on Tucker Carlson of Fox News, calling it ‘white supremacist’ to question whether particular policy choices enable illegal immigrants to nullify the votes of American citizens, is merely one example.”

So, it might be suggested that there have been two turning points recently. First, nationally known and respected though controversial conservative correspondent Tucker Carlson has not only refused to back down when the ADL demanded that he be fired and even went on the offensive about the two different standards used by the group when considering civil rights in the United States versus those in Israel. His exchanges with ADL were widely reported in the media, unusual in itself. And second, an increasing number of American Jews are really starting to wake up to the moral dilemma posed by the Zionist state. Both changes in direction are more than welcome and long overdue.