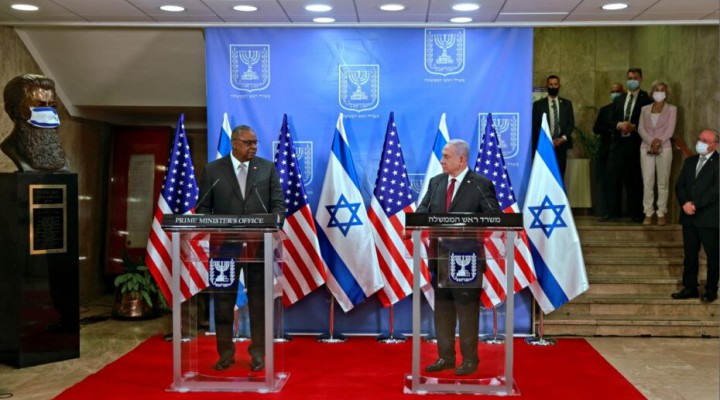 Biden, like presidents before him, is caught in the trap between an extremist-dominated Israel and the all-powerful domestic Israel Lobby.

Donald Trump, who was elected President of the United States in 2016, may have won due to voters attracted by his pledge to end many of the “stupid” wars that the American military was involved in worldwide. In the event, however, he ended no wars in spite of several attempts to withdraw from Afghanistan and Syria, and almost started new conflicts with cruise missile attacks and the assassination of an Iranian general. Trump was consistently outmaneuvered by his “experts” on the National Security Council and at the Pentagon, who insisted that it was too early to disengage from the Middle East and Central Asia, that America’s own national security would be threatened.

Trump did not have either the experience or the grit necessary to override his generals and national security team, so he deferred to their judgement. And as has been well documented he was under constant pressure to do Israel’s bidding in the region, which mandated a continued substantial US military presence to protect the Jewish state and to provide cover for the regular attacks staged by the Israelis against several of their neighbors. Motivated by the substantial political donations coming from multi-billionaires like casino magnate Sheldon Adelson, Trump conceded more to Israel than any previous president, recognizing Jerusalem as the country’s capital as well as Israeli annexation of the Syrian Golan Heights while also giving the green light to settlement expansion and eventual incorporation of all of the occupied West Bank into Greater Israel.

President Joe Biden has already indicated that he will if anything out-do Trump when it comes to favoring America’s persistent “ally” and “best friend” in the Middle East. Biden, who has declared himself to be a “Zionist,” is responding to the same lobbying and media power that Israel’s friends are able to assert over any US national government. In addition, his own Democratic Party in Congress is also the home of most of the federal government’s genuine Zionists, namely the numerous mostly Jewish legislators who have long dedicated themselves to advancing Israeli interests. Finally, Biden has chosen to surround himself with large numbers of Jewish appointed officials as his foreign policy and national security team, many of whom have close and enduring personal ties to Israel, to include service in the Israeli Army.

The new Secretary of Defense, former Lieutenant General Lloyd Austin has recently returned from a trip to Israel, where he confirmed one’s worst fears about the direction the Biden Administration is moving in. It was a first visit to Israel by a Biden Administration cabinet member. Austin met with his counterpart Benny Gantz and also with Prime Minister Benjamin Netanyahu, both of whom warned him that Israel considered renewal of any nuclear arms limitation agreement with Iran to be a threat, only delaying development of a weapon. As Bibi expressed it, “Iran has never given up its quest for nuclear weapons and the missiles to deliver them. I will never allow Iran to obtain the nuclear capability to carry out its genocidal goal of eliminating Israel.”

Austin responded by the usual two-step avoiding Israel’s expressed concerns, which might be considered a threat of an Israeli veto on Biden’s attempt to revert to the original 2015 JCPOA multilateral pact. He said that the Biden administration would continue to guarantee Israel’s “qualitative military edge” as an element in America’s “strong commitment to Israel and the Israeli people,” adding that “our bilateral relationship with Israel in particular is central to regional stability and security in the Middle East. During our meeting I reaffirmed to Minister Gantz our commitment to Israel is enduring and it is ironclad.”

Wrong answer general. The foreign policy of any country should be based on actual interests, not on political donations and effective lobbying, still less on what one reads in the Zionist mainstream media in the US. Netanyahu has stated that the Iran agreement is “fatally flawed” and has said recently that “History has taught us that deals like this, with extremist regimes like this, are worth nothing.” Israel, which uniquely has a secret nuclear arsenal in the Middle East, is one of the world’s leading violators of attempts to limit nuclear proliferation. It is also destabilizing to the entire Middle East region, an apartheid state – not a democracy – and its government is widely regarded as right-wing extremist. That Netanyahu should feel somehow empowered to talk down to the Iranians, and to the US, remains a mystery.

Beyond what goes on between Washington and Jerusalem, the real center of power, the Israel Lobby, consists of a large number of separate organizations that act collectively to advance Israeli interests. There is considerable corruption in the process, with cooperative congressmen being rewarded while those who resist are targeted for replacement. Much of the legwork on subverting Capitol Hill and the White House is done by foundations, which often pretend to be educational to obtain tax exempt status. “Experts” from the various pro-Israel groups are then seeded into the decision-making process of the federal government, serving as gatekeepers to prevent consideration of any legislation that might be objected to by Netanyahu.

One of the most active lobbying groups is the so-called Foundation for the Defense of Democracies (FDD) which is in fact closely tied to and takes direction from the Israeli Embassy in Washington. FDD is particularly focused on going to war with Iran and whenever there are discussions on Iran policy on Capitol Hill one can be sure that an FDD expert will be present and active.

And if you really want to know why America’s foreign policy has been so self-destructive, it has recently been learned that FDD was actually able to insert one of its employees into the National Security Council under Donald Trump. According to a report on Bloomberg, Richard Goldberg, an outspoken anti-Iran hawk and former associate of John Bolton, is leaving the council and would be returning “to [the Foundation for Defense of Democracies], which continued to pay his salary during his time on the National Security Council.”

The NSC exists to provide the president with the best possible intelligence and analysis available for dealing with problem areas, something that Goldberg, due to his conflict of interest, would have been unlikely to provide, particularly as he was still on the FDD payroll and was also being given generous travel expenses while working for the government. Whether he was also being paid by the NSC, which is referred to as “double dipping,” is not known. In any event, there is something very wrong about the appointment of a paid partisan who seeks war with a particular country to a vital national security position where objectivity is an imperative. Ned Price, former special assistant to President Obama on national security, commented “…we now know a White House point person on Iran policy was receiving a salary from and remained employed by an organization that has put forward some of the most extreme and dangerous pro-regime change policies.”

So Biden, like presidents before him, is caught in the trap between an extremist-dominated Israel itself and its demonic prime minister on one side and the all-powerful domestic Israel Lobby on the other. Unfortunately, one cannot expect the United States to get out from under the Israeli thumb no matter whom is elected president.

0 thoughts on “Who Wags the Dog? Israel’s Friends in Washington Mean Constant War in the Middle East”