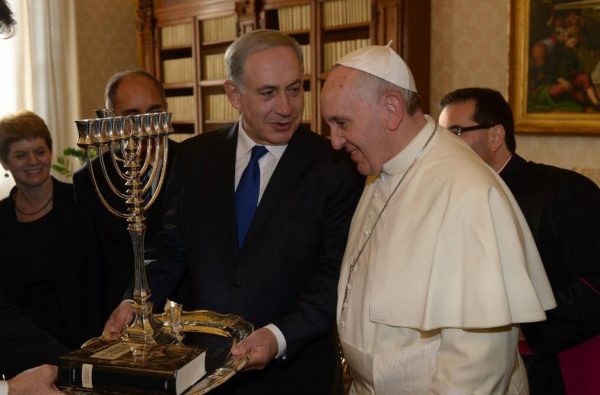 But don’t mention the Palestinians
The California State Board of Education has finally passed its Ethnic Studies curriculum including discussion of Jews, emphasizing their victimhood and contributions to the United States, without including any other “white” ethnicities, several of which are far more numerous than are Jewish Americans. Or perhaps the Jewish “advisers” who collaborated on creating an “acceptable” final draft do not consider themselves to be white, or is it that “chosen” status makes one racially unique?

And then there is the story of the high school football coach who was fired because his team had used expressions in audible calls at the line of scrimmage that are apparently considered by some to be anti-Semitic. The words were reportedly “rabbi,” “dreidel” and “Auschwitz.” Now, if they had been saying “Let’s beat the rabbi with a dreidel in Auschwitz” I would kind of get it, but seriously a man has lost his job and probably his career over this kind of nonsense? If the team had used words with Christian connotations like “priest,” “manger” and “kulaks” would anyone have cared? Someone is being quite a bit too sensitive over nothing, but, of course it is what we have come to expect.
The media has also been reporting how the US military currently sees as one of its principal roles the extirpation of “white supremacy’ within the ranks, to include encouraging the spying of soldiers on each other to determine whether they are resistant to measures to increase “diversity.” Perhaps not surprisingly, this has included the creation of a Pentagon office in Florida appropriately named the Defense Equal Opportunity Management Institute (DEOMI) which might be described as the affirmative action enabler of America’s armed forces. Equally unsurprising, DEOMI has included in its mission the assertion that those who deny the so-called holocaust are a threat to national security. A 20 page booklet entitled Holocaust Revisionism published by DEOMI’s “Research Directorate” as an education resource was written by one Captain Carlos C. Huerta, an orthodox Jewish rabbi who was at the time a US Army chaplain at Fort Sill in Oklahoma. Brooklyn born and raised, Huerta lived for years in Israel and taught at a Jewish school in Jerusalem.

The booklet is intended to send the message to American military service personnel that skepticism about the standard history taught in schools regarding what happened to Europe’s Jews during World War 2 is not permissible for those in uniform. Any revisionist criticism of the standard Holocaust Museum tale about the killing of Six Million Jews should be regarded as nothing less than a threat to national security. The booklet states that “A successful fighting force is a cohesive one, one where all members have respect for each other’s diversity and dignity. Holocaust revisionism has the potential to destroy that respect.”

Even a cursory look at the holocaust story by anyone who has any interest in World War 2 Europe reveals that the standard account does not make sense on many levels, either in terms of the number of victims or regarding the existence of death camps. The holocaust’s established narrative has pretty much been contrived over the past fifty years for political reasons, see Norman Finkelstein’s brilliant deconstruction of it in his book “The Holocaust Industry: Reflections on the Exploitation of Jewish Suffering.” Books including the highly praised “Night” written by Eli Wiesel, whom Finkelstein calls the “high huckster of the holocaust” are largely works of fiction.

So now American soldiers who want to continue to serve their country will be determined to be security risks if they question the imposed holocaust narrative, which exists to perpetuate the belief in Jewish suffering and brings with it a number of practical advantages. It is, for example, regularly deployed to excuse the horrific treatment of the Palestinian people by Israel – Jewish suffering means that the creation of a homeland is a debt that all the world owes to the Jews without regard to what has been done to the area’s other inhabitants.

Holocaust guilt is also promoted extensively in the United States to counter any criticism of what Israel and Jewish groups are up to, as they use their wealth and access to power to corrupt America’s governmental institutions and drive the country to needless wars. Lest we forget, the holocaust industry operates everywhere in America, to include the taxpayer funded holocaust museums that appear to spring up like mushrooms and more particularly in the education system. Eight states already have laws mandating holocaust education (California, New York, New Jersey, Rhode Island, Florida, Illinois, Indiana and Michigan) and there is considerable pressure to make it universal in the United States. An alarmed World Jewish Congress (WJC) is urging required holocaust education for everyone everywhere “citing statistics from a 2018 poll revealing half of millennials can’t name a single Nazi concentration camp.”

The old line about how, if one religion is persecuted or targeted by a government, other religions will soon be treated the same way never seems to include those who are protected under the umbrella of Jewish exceptionalism. A Department of Defense training manual that has been prepared in response to the discovery of “white supremacy” identifies Catholics and evangelical Christians inter alia as “religious extremists,” presumably because they hold traditional religious views that are unacceptable to the implementers of the currently fashionable woke culture. It warns that “Christian extremism is often conflated with white supremacy for a joint ideology focused on racial and religious purity which they believe to be God’s intention” and places them in a broader group together with members of the Ku Klux Klan, al-Qaeda, and Hamas. The manual claims that such organizations “…use or advocate violence to accomplish their objectives and are therefore [are] rightly classified as extremists.”

To be sure, the US military is becoming increasingly a social engineering tool and irrelevant as it has not actually defended the country since the War of 1812. The training manual and whatever other “teaching tools” it spawns are part of Secretary of Defense Lloyd Austin’s “stand-down” to identify and discharge extremists in the US armed forces which was issued after the January 6th incident at the US Capitol in Washington. Some of those involved were reported to be military veterans. Austin did not provide any evidence that “extremism” was pervasive among active-duty soldiers, nor did he define what views in particular are unacceptable. Critics counter that the problem is a minor one in the military, with only nine army soldiers discharged for reasons that might be linked to political extremism in 2020.

If one is going to identify conservative Christians as threats, how about kicking people out of government and denying security clearances for being too close to Israel, General Austin? Israel conducts the most aggressive spying operations directed against the US by any “friendly” country, but it rarely pays any price for its behavior. In 2009 FBI counter intelligence officer John Cole reported how many cases of Israeli espionage were dropped under orders from the Justice Department. He provides a “conservative estimate” of 125 viable investigations into Israeli espionage involving both American citizens and Israelis that were stopped due to political pressure.

And if there is any doubt beyond that evidence, now we have it straight from the horse’s mouth: Ex-Israeli spy Jonathan Pollard gave an interview last week in which he said “The bottom line on this charge of dual loyalty is, I’m sorry, we’re Jews, and if we’re Jews, we will always have dual loyalty. If you’re outside Israel, then you live in a society in which you are basically considered unreliable.” He also said that Jews who though of the United States as their home are delusional and when asked if he would encourage other American Jews working for US intelligence to spy for Israel he responded “I’d tell him, not doing anything is unacceptable. So simply going home [to Israel] is not acceptable. Making aliyah is not acceptable. You have to make a decision whether your concern for Israel and loyalty to Israel and loyalty to your fellow Jews is more important than your life.”

So here we are again and one has to wonder how many Jonathan Pollards are out there. Those who run America’s various levels of government seem to believe that Jews and the approved narrative that surrounds them must be protected at all costs, up to and including promoting a false historical story, giving security clearances to dual nationals, and protecting a rogue nation that is preeminent only for its ability to behave genocidally towards its neighbors. Now American soldiers could be removed from the service if it is determined that they believe something that is unacceptable to the same powerful minority. One has to wonder how it will all end or whether the American people will eventually wake up from this nightmare.