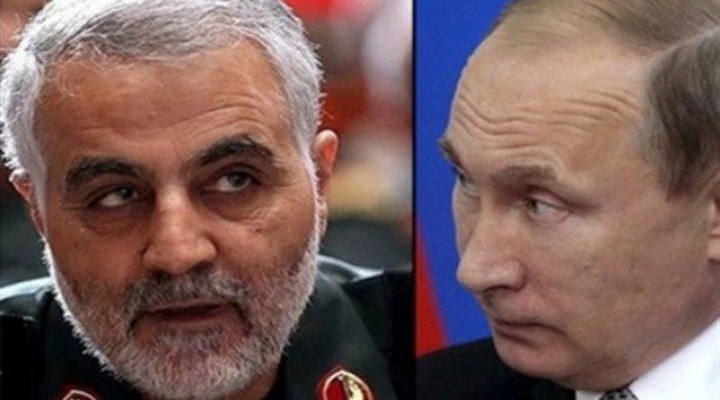 Why the US deep state even after departure of Trump, who had the general killed, won’t forgive Russia and Iran

In a stunning interview conducted by the Beirut-based al Mayadeen network, Hezbollah’s secretary-general Hassan Nasrallah outlines how Major General Qassem Soleimani – who was assassinated in an American drone strike at Baghdad airport a little over a year ago – had been instrumental in convincing Russia to help Syria militarily in its war against Salafi-jihadis.

Nasrallah sets the stage for the crucial visit by Soleimani to Moscow in 2015 when he had a two-hour face-to-face meeting with President Vladimir Putin.

‘(In this meeting) he (Soleimani) presented a (comprehensive) strategic report to (Putin) on the situation in Syria and the region, (and explained) the proposed idea and the expected results. Of course, (in the meeting) he used a scientific, objective, military and battlefield language, (and based his statements) on maps, land areas, numbers and statistics. At this meeting, President Putin said to Hajj (Qassem): “I am convinced”, and the decision (for a Russian military effort in Syria) was made. This is what I heard from Hajj Soleimani.’

Nasrallah also makes an important precision: the whole process was already in motion, at Syria’s request:

‘Look, I am somewhat objective and rational. I do not like to create myths. It is not accurate to say that Hajj Qassem Soleimani (alone) is the one who convinced Putin to intervene (in Syria). I prefer to say that through his strategic reading (of events), argumentation, compelling logic, and charismatic personality, Hajj Qassem Soleimani was able to provide an outstanding addition to all the previous efforts that led Russia to take the decision to come to Syria. Great efforts were made (before) and many discussions were held, yet President Putin reportedly remained hesitant.’

Nasrallah adds that Soleimani, “was skilled in (the art of) persuasion and had (impeccable) logic . He did not shame Russia into (joining the war), nor did he use (empty) rhetoric. Not at all. He used a scientific language, as he explained the (possible) military and battlefield outcomes, as well as the political outcomes for the (Russian) intervention (in Syria).”

It’s all about ground intel

Now let’s put this all in context. Putin is a master geopolitical chess player. Nasrallah observes there were “a number of relevant military, security and political officials” at the meeting. This implies Russian Defense Minister Sergey Shoigu and most of all top strategist Nikolai Patrushev.

All of them were vey much aware by 2015 that the ultimate target of having ISIS/Daesh fester in Syria – in tandem with the notorious “Assad must go” campaign – was to create the conditions for a fake Caliphate to reach power, spread to the Caucasus, and destabilize Russia. That was encapsulated in the Russian formula “it’s only 900 km from Aleppo to Grozny”.

Soleimani’s merit was to produce the definitive sales pitch. Based on his vast on the ground experience, he knew that a resistance front alone would not be enough to protect Damascus. The “secret” of this two-hour Moscow meeting is that Soleimani must have made crystal clear that the next stage for the fake Caliphate would be directed against Russia’s soft underbelly, and not Iran.

Moscow’s decision caught the Pentagon and NATO proverbially sleeping: Atlanticists were not expecting a tight Russian air force contingent and a squad of top military advisers to be deployed in a flash to Syria.

But arguably the political decision had already been made. Such a complex military operation needs exhaustive planning – and that took place before Soleimani’s visit. Moreover, Russian intel knew all the details about the state of war on the ground and the glaring overextension of the Syrian Arab Army (SAA).

What Soleimani brought to the table was absolutely priceless coordination: Hezbollah commanders, IRGC advisers, assorted Iranian-led militias, in conjunction with the Syrian Tigers, as the leading shock troops, seconded by Russian elite Special Forces, intervening either in the desert or in saturated urban areas – all able to pinpoint to surgical Russian air strikes against ISIS/Daesh and those reconverted al-Qaeda “moderate rebels”.

Soleimani knew that to win this war he needed air power – and he finally managed to pull it off, as he coordinated to perfection the on the ground/intel work of several armies and the top echelons of the Russian General Staff.

Starting on this fateful 2015 meeting, the alliance between Soleimani and the Russian military evolved to ironclad proportions. Later on, the Pentagon and NATO were very much aware how Soleimani, always the supreme battlefield commander, was closely working with both Baghdad and Damascus to definitively expel US boots from Iraq. That was the main not so secret reason for his assassination.

All of the above explains why US neocons and powerful Deep State factions will never “forgive” Iran and Russia for what happened in Syria – irrespective of further actions by the handlers of the new Hologram administration in Washington.

Signs, so far, point to proverbial, non-stop demonization of Russia; Trump administration’s illegal sanctions against Iranian energy exports remaining in place; and no prospect of admitting that Russia, Iran and Hezbollah prevailed in Syria.

0 thoughts on “How Soleimani coaxed Putin to help Damascus”