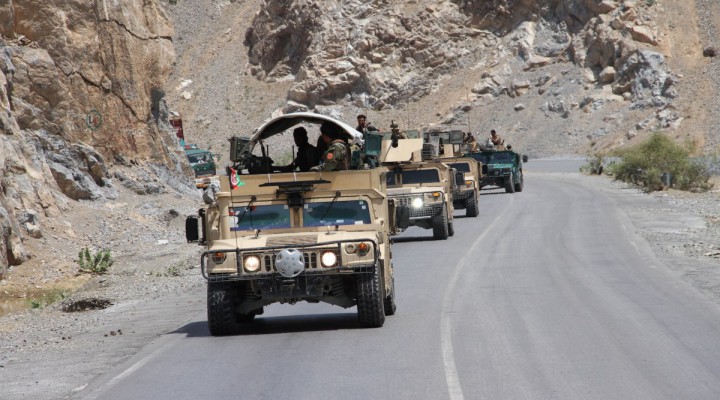 Over a week ago the excruciatingly slow Doha peace talks between the Kabul government and the Taliban resumed, and then they dragged on for two days observed by envoys from the EU, US and UN.

Nothing happened. They could not even agree on a ceasefire during Eid al-Adha. Worse, there’s no road map for how negotiations might pick up in August. Taliban supreme leader Haibatullah Akhundzada duly released a statement: the Taliban “strenuously favors a political settlement.”

But how? Irreconcilable differences rule. Realpolitik dictates there’s no way the Taliban will embrace Western liberal democracy: They want the restoration of an Islamic emirate.

Afghan President Ashraf Ghani, for his part, is damaged goods even in Kabul diplomatic circles where he’s derided as too stubborn, not to mention incapable of rising to the occasion. The only possible solution in the short term is seen as an interim government.

Yet there is no leader around with national appeal – no Commander Massoud figure. There are only regional warlords – whose militias protect their own local interests, not distant Kabul.

While facts on the ground spell out balkanization, the Taliban, even on the offensive, know they cannot possibly pull off a military takeover of Afghanistan.

And when the Americans say they will continue to “support Afghan government forces,” that means still bombing, but from over the horizon and now under new Centcom management in Qatar.

Russia, China, Pakistan and the Central Asian “stans” – everyone is trying hard to circumvent the stalemate. Shadow play, as usual, has been in full effect. Take for instance the crucial meeting of the Collective Security Treaty Organization (former Soviet states) – nearly simultaneous with the recent Shanghai Cooperation Organization summit in Dushanbe and the subsequent Central Asia-South Asia connectivity conference in Tashkent.

The CSTO summit was 100% leak-proof. And yet, previously, they had discussed “possibilities of using the potential of the CSTO member states” to keep the highly volatile Tajik-Afghan border under control.

That’s very serious business. A task force headed by Colonel-General Anatoly Sidorov, the chief of the CSTO Joint Staff, is in charge of “joint measures” to police the borders.

Now enter an even more intriguing shadowplay gambit – met with a non-denial denial by both Moscow and Washington.

The Kommersant newspaper revealed that Moscow offered some “hospitality” to the Pentagon at its military bases in Kyrgyzstan and Tajikistan (both SCO member states). The objective: keep a joint eye on the fast-evolving Afghan chessboard – and prevent drug mafia cartels, Islamists of the ISIS-Khorasan variety and refugees from crossing the borders of these Central Asian ‘stans.

What the Russians are aiming at – non-denial denial withstanding – is not to let the Americans off the hook for the “mess” (copyright Sergey Lavrov) in Afghanistan while preventing them from reestablishing any offshoot of the Empire of Bases in Central Asia.

They established bases in Kyrgyzstan and Uzbekistan after 2001, although they had to be abandoned later in 2004 and 2014. What is clear is there’s absolutely no chance the US will re-establish military bases in SCO and CSTO member nations.

Birth of a new Quad

At the Central Asia-South Asia 2021 meeting in Tashkent, right after the SCO meeting in Dushanbe, something quite intriguing happened: the birth of a new Quad (forget that one in the Indo-Pacific).

This is how it was spun by the Afghan Ministry of Foreign Affairs: a “historic opportunity to open flourishing international trade routes, [and] the parties intend to cooperate to expand trade, build transit links and strengthen business-to-business ties.”

If that sounds like something straight out of the Belt and Road Initiative, well, here’s the confirmation by the Pakistani Foreign Office:

The US doing Belt and Road right into China’s alley? A State Department tweet confirmed it. Call it a geopolitical case of “if you can’t beat ’em, join ’em.”

Now this is probably the only issue that virtually all players on the Afghanistan chessboard agree: a stable Afghanistan turbo-charging the flow of cargo across a vital hub of Eurasia integration.

Taliban spokesperson Suhail Shaheen has been very consistent: the Taliban regard China as a “friend” to Afghanistan and are eager to have Beijing investing in reconstruction work “as soon as possible.”

The question is what Washington aims to accomplish with this new Quad – for the moment just on paper. Simple: to throw a monkey wrench into the works of the SCO, led by Russia-China, and the main forum organizing a possible solution for the Afghan drama.

In this sense, the US versus Russia-China competition in the Afghan theater totally fits the Build Back Better World (B3W) gambit, which aims – at least in thesis – to offer an alternative infrastructure plan to Belt and Road and pitch it to nations from the Caribbean and Africa to the Asia-Pacific.

What is not in question is that a stable Afghanistan is essential in terms of establishing full rail-road connectivity from resource-rich Central Asia to the Pakistani ports of Karachi and Gwadar, and beyond to global markets.

For Pakistan, what happens next is a certified geoeconomic win-win – whether via the China-Pakistan Economic Corridor, which is a flagship Belt and Road project, or via the new, incipient Quad.

China will be funding the highly strategic Peshawar-Kabul motorway. Peshawar is already linked to CPEC. The completion of the motorway will symbolically seal Afghanistan as part of CPEC.

And then there’s the delightfully named Pakafuz, which refers to the trilateral deal signed in February between Pakistan, Afghanistan and Uzbekistan to build a railway – a fundamentally strategic connection between Central and South Asia.

Full connectivity between Central Asia and South Asia also happens to be a key plank of the Russian master strategy, the Greater Eurasia Partnership, which interacts with Belt and Road in multiple ways.

Lavrov spent quite some time in the Central Asia-South Asia summit in Tashkent explaining the integration of the Greater Eurasia Partnership and Belt and Road with the SCO and the Eurasia Economic Union.

Lavrov also referred to the Uzbek proposal “to align the Trans-Siberian Railway and the Europe-West China corridor with new regional projects.” Everything is interlinked, any way you look at it.

The new Quad is in fact a latecomer in terms of the fast-evolving geopolitical transmutation of the Heartland. The whole process is being driven by China and Russia, which are jointly managing key Central Asian affairs.

Already in early June, a very important China-Pakistan-Afghanistan joint statement stressed how Kabul will be profiting from trade via the CPEC’s port of Gwadar.

On July 16, Islamabad and Moscow signed a mega-deal for a US$3 billion, 1100-kilometer gas pipeline between Port Qasim in Karachi and Lahore, to be finished by the end of 2023.

The pipeline will transport imported LNG from Qatar arriving at Karachi’s LNG terminal. This is the Pakstream Gas Pipeline Project – locally known as the North-South Gas project.

The interminable Pipelineistan war between IPI (India-Pakistan-Iran) and TAPI (Turkmenistan-Afghanistan-Pakistan-India) – which I followed in detail for years – seems to have ended with a third-way winner.

As much as the Kabul government, the Taliban seem to be paying very close attention to all the geoeconomics and how Afghanistan is at the heart of an inevitable economic boom.

Perhaps both sides should also be paying close attention to someone like Zoon Ahmed Khan, a very bright Pakistani woman who is a research fellow with the Belt and Road Initiative Strategy Institute at Tsinghua University.

Zoon Ahmed Khan notes how “one significant contribution that China makes through the BRI is emphasizing on the fact that developing countries like Pakistan have to find their own development path, rather than follow a Western model of governance.”

She adds, “The best thing Pakistan can learn from the Chinese model is to come up with its own model. China does not wish to impose its journey and experience on other countries, which is quite important.”

She is adamant that Belt and Road “is benefiting a much greater region than Pakistan. Through the initiative, what China tries to do is to present the partner countries with its experience and the things it can offer.”

All of the above definitely applies to Afghanistan – and its convoluted but ultimately inevitable insertion into the ongoing process of Eurasia integration.