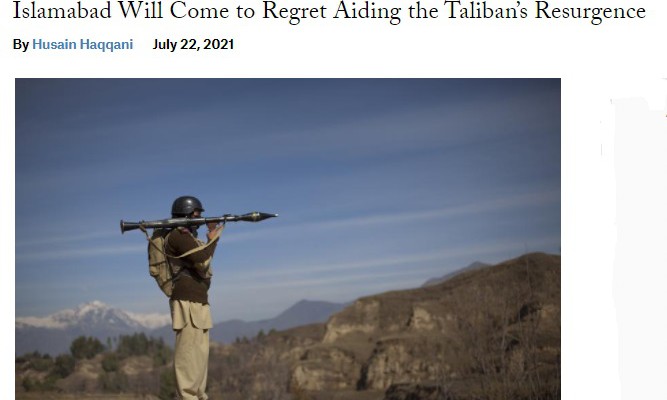 Exclusive– Former Pakistani Ambassador to the US Husain Haqqani, who’s widely regarded back home as a disgraced diplomat following the 2011 “Memogate” scandal, published a critical piece for the prestigious Foreign Affairs journal titled “Pakistan’s Pyrrhic Victory in Afghanistan”. His primary point is that Pakistan will rue the Taliban’s possibly impending return to power in Afghanistan. Mr. Haqqani wrote that “Pakistan’s nightmare scenario would be to find itself caught between an uncontrollable Taliban and international demands to rein them in.”

He also predicted that such a development would destabilize his country’s domestic situation by generating uncontrollable refugee waves, fueling extremism, and thus preventing it from becoming a so-called “normal country” like its military leadership plans. Mr. Haqqani also expects that US-Pakistani relations will continue to suffer from distrust. Additionally, he believes that his country will supposedly remain obsessed with India. All of this, he suggests, means that the worst is yet to come if the Taliban returns to power.

There are several problems with his predictions. Firstly, they’re predicated on a couple presumptions that don’t hold up to closer scrutiny. These are the Taliban being Pakistan’s proxies and the US only having had the most benign motives for invading Afghanistan two decades ago. The former is discredited by Prime Minister Imran Khan publicly revealing that his country lost a lot of leverage over the group once the US made its withdrawal date public while the latter ignores America’s unipolar aims at the time and its growing strategic ties with India.

Without diverting too much from the purpose of this piece, which is to point out the fallacies underpinning Mr. Haqqani’s dire predictions, some further words must be said about the geopolitical situation. India exploited the US’ invasion of Afghanistan to establish so-called “strategic depth” there vis-a-vis Pakistan, after which it launched a full-fledged proxy war against its neighbor. This was done under the protection of the US military presence in the country. One can agree or disagree with India’s strategy, but there’s no denying that it exists.

For these reasons, Mr. Haqqani’s remarks about Pakistan’s obsession with India can be described as misleading since they imply that there’s no basis for this strategic focus. They also ignore the outcome of March’s inaugural Islamabad Security Dialogue which saw his country’s political, diplomatic, and military leadership jointly unveil Pakistan’s new grand strategy of geo-economics. Chief Of Army Staff General Qamar Javed Bajwa even proposed facilitating India’s connectivity with Central Asia if the Kashmir Conflict is peacefully resolved.

It was this geo-economic game-changer which also transformed bilateral relations with the US in the shadow of the Pentagon’s impending military withdrawal from Afghanistan. The US, Pakistan, Afghanistan, and Uzbekistan recently established a new quadrilateral framework focused on regional integration. Although the official State Department announcement doesn’t mention the trilateral Pakistan-Afghanistan-Uzbekistan (PAKAFUZ) railway that was agreed upon in February, this project likely forms the core of their future relations.

To explain, the US intends to utilize PAKAFUZ for the purpose of expanding its economic influence into post-withdrawal Afghanistan and the Central Asian Republics (CARs), potentially after turning Pakistan into its regional base of economic operations per Prime Minister Imran Khan’s earlier proposal to this effect. The American and Pakistani Establishments might never fully trust each other in the military sense after the Afghan War, but they’re both willing to give economic cooperation a shot and turn it into the new focus of their ties.

As for the unpredictable situation in Afghanistan, nobody really knows whether the Taliban will succeed in sweeping back into power or not, but there really isn’t all that much to fear from anyone if it does. Pakistan’s domestic security situation has vastly improved over the past decade. The Taliban has also matured to the point where they’re now cautiously welcomed into the international community after having sent representatives to various world capitals as part of the peace process. They also pledged not to support international terrorism.

Skeptics might scoff at the last point but the argument can be made that the Taliban has every reason not to return to its old ways of hosting foreign militant groups. It’s recently cultivated excellent political ties with China and Russia, and it’s banking on turning Afghanistan into a pivotal node in Beijing’s Belt & Road Initiative (BRI), not to mention capitalizing off of PAKAFUZ’s facilitation of Central Asia-South Asia connectivity. All that the Taliban has to do is behave responsibly and it can reap the windfall of Eurasia’s Silk Roads.

To summarize, Mr. Haqqani’s dire predictions for Pakistan after the end of the Afghan War are predicated on serious fallacies. The most obvious are that he either ignores or is ignorant of his country’s new focus on geo-economics as well as the gains that it’s already made when it comes to February’s PAKAFUZ agreement and this month’s newly established quadrilateral framework with the US for tapping into that project’s full potential. Without acknowledging them, neither he nor anyone else can make accurate predictions about Pakistan.