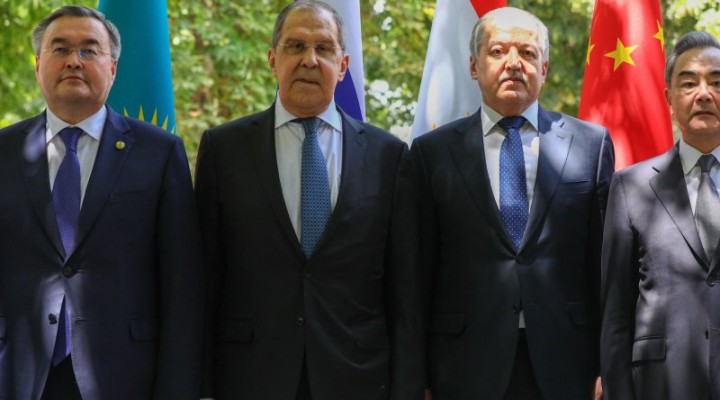 The Shanghai Cooperation Organization meeting of Foreign Ministers on Wednesday in Dushanbe, the Tajik capital, may have been an under-the-radar affair, but it did reveal the contours of the big picture ahead when it comes to Afghanistan.

So let’s see what Russia and China – the SCO’s heavyweights – have been up to.

2. Fighting terror – which means, in practice, al-Qaeda remnants, ISIS-Khorasan and the Eastern Turkestan Islamic Movement (ETIM). Afghanistan should not be a haven for terrorist outfits – again.

3. The Taliban, for their part, should pledge a clean break with every terrorist outfit.

Atmar, according to diplomatic sources, fully agreed with Wang. And so did Tajik Foreign Minister Sirojiddin Muhriddin. Atmar even promised to work with Beijing to crack down on ETIM, a Uighur terror group founded in China’s western Xinjiang. Overall, the official Beijing stance is that all negotiations should be “Afghan-owned and Afghan-led.”

It was up to Russian presidential envoy Zamir Kabulov to offer a more detailed appraisal of the Dushanbe discussions.

The main Russian point is that Kabul and the Taliban should try to form a provisional coalition government for the next 2-3 years while they negotiate a permanent agreement. Talk about a Sisyphean task – and that’s an understatement. The Russians know very well that both sides won’t restart negotiations before September.

Moscow is very precise about the role of the extended troika – Russia, China, Pakistan and the US – in the excruciatingly slow Doha peace process talks: the troika should “facilitate” (also Wang’s terminology), not mediate the proceedings.

Another very important point is that once “substantive” intra-Afghan negotiations resume, a mechanism should be launched to clear the Taliban of UN Security Council sanctions.

This will mean the normalization of the Taliban as a political movement. Considering their current diplomatic drive, the Taliban do have their eyes on the ball. So the Russian warning that they should not become a security threat to any of the Central Asian “stans” or there will be “consequences” has been fully understood.

Four of the five “stans” (Turkmenistan is the exception) are SCO members. By the way, the Taliban have sent a diplomatic mission to Turkmenistan to ease its fears.

Break for the border

In Dushanbe, a special meeting of the SCO-Afghanistan Contact Group, established in 2005, for the first time was held at the foreign minister level.

This shows that the SCO as a whole is engaged in making its “facilitate, not mediate” role the prime mechanism to solve the Afghan drama. It’s always crucial to remember that no fewer than six SCO member-nations are Afghanistan’s neighbors.

During the main event in Dushanbe – the SCO Foreign Ministers Council – the Russians once again framed Washington’s Indo-Pacific strategy as an attempt to deter China and isolate Russia.

Following recent analyses by President Vladimir Putin and Foreign Minister Sergey Lavrov, the Russian delegation explained to its SCO counterparts its view counterposing Moscow and Beijing’s effort to develop a polycentric world system based on international law, on the one hand, with the Western concept of the so-called “rules-based world order.”

While the SCO was discussing the drive towards a polycentric world system, the Taliban, on the ground, kept doing what they’ve been doing for the past few weeks: capturing strategic crossroads.

The Taliban already controlled border crossings with Tajikistan, Uzbekistan, Iran and Turkmenistan. Now they have taken over ultra-strategic Spin Boldak, bordering Balochistan in Pakistan, which in trade terms is even more important than the Torkham border crossing near the Khyber Pass.

According to Taliban spokesman Suhail Shaheen, “the Spin Boldak district in Kandahar province has been cleared of the enemy” – Kabul’s forces – “and the district is now under the control of the mujahideen.” The term “mujahideen” in the Afghan context means indigenous forces fighting foreign invaders or proxies.

To have an idea of the importance of Spin Boldak for the Taliban economy during their years in power, see the third chapter of a series I published in Asia Times in 2010, here and here. Eleven years ago, I noted that “the Afghan-Pakistan border is still porous, and the Taliban seem to believe they may even get their Talibanistan back.” They believe that now, more than ever.

Meanwhile, in the northeast, in Badakhshan province, the Taliban are getting closer and closer to the border with Xinjiang – which has led to some hysteria about “terrorism” infiltrating China via the Wakhan corridor.

Nonsense. The actual Afghanistan-China border in the Wakhan is roughly 90 kilometers. Beijing can exercise full electronic surveillance on everything that moves.

I crossed part of the Wakhan on the Tajik side, bordering Afghanistan, during my Central Asian loop in late 2019, and on some stretches of the Pamir Highway I was as close to Xinjiang as 30 kilometers or so through no man’s land. The only people I saw along the geologically spectacular, desolate landscape were a few nomad caravans. The terrain can be even more forbidding than the Hindu Kush.

If any terror outfits try to get to Xinjiang, they won’t dare cross the Wakhan; they will try to infiltrate via Kyrgyzstan. I met a lot of Uighurs in Bishkek, the Kyrgyz capital: mostly businessman, legally going back and forth. On the Kyrgyz-Xinjiang border, there was a steady flow of cargo trucks. ETIM was dismissed as a bunch of nutcases.

What’s way more relevant is that the Ministry of Public Works in Kabul is actually building a 50-kilometer road – for the moment unpaved –  between Badakhshan province and Xinjiang, all the way to the end of the Wakhan corridor. They will call it the Wakhan Route.

No imperial graveyard ahead

SCO member Pakistan remains arguably the key to solve the Afghan drama. The Pakistani ISI remains closely linked to every Taliban faction: never forget the Taliban are a creation of legendary General Hamid Gul in the early 1990s.

At the same time, for any jihadi outfit it’s easier to hide and lie low deep in the Pakistani tribal areas than anywhere else – and they can buy protection, irrespective of what the Taliban are doing in Afghanistan. Prime Minister Imran Khan and his circle are very much aware of it – as much as Beijing. That will be the ultimate test for the SCO in its anti-terror front.

China needs an eminently stable Pakistan for all the long-term Belt and Road/China-Pakistan Economic Corridor projects and to fulfill its goal of incorporating Afghanistan. Kabul would be bound to benefit not only from increased connectivity and infrastructure development but also from future mineral including rare earth exploration projects.

Meanwhile, Hindu nationalists would love to outflank Pakistan and extend their influence in Kabul, encouraged by Washington. For the Empire of Chaos, the ideal agenda is – what else? – chaos: disrupting Belt and Road and the Russia-China road map for Eurasian integration, Afghanistan included.

Added hysteria depicting Russia and China involved in Afghan reconstruction as but a new chapter in the never-ending “graveyard of empires” saga does not even qualify as nonsense. The talks in Dushanbe made clear that the Russia-China strategic partnership approach to Afghanistan is cautiously realistic.

It’s all about national reconciliation, economic development and Eurasian integration. Not included are a military component, hubs for an Empire of Bases, foreign interference. Moscow and Beijing also recognize, pragmatically, that fulfilling those dreams will not be possible in an Afghanistan hostage to ethno-sectarianism.

The Taliban for their part seem to have recognized their own limits, hence their current inter-regional diplomatic drive. They seem to be paying close attention to the inevitable heavyweights – Russia and China – as well as the Central Asian “stans” plus Pakistan and Iran.

Whether all this interconnection dance will herald the beginning of a post-war Afghanistan as a real functioning state, all we can say is insha Allah.