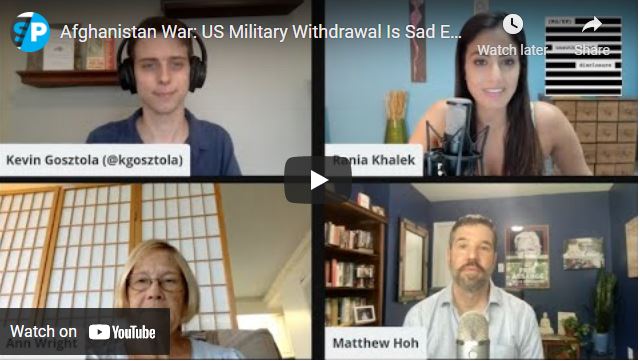 Joining the “Unauthorized Disclosure” podcast this week is Ann Wright and Matthew Hoh.

Ann is a retired U.S. Army colonel and State Department diplomat who was part of the small team that reopened the U.S. embassy in Kabul, Afghanistan in December 2001. She eventually resigned in protest against the Iraq War.

Hosts Rania Khalek and Kevin Gosztola discuss in great detail what led up to the U.S. military’s withdrawal from Afghanistan.

Ann and Matthew respond to the panic around the Taliban and what will happen now that U.S. military forces are leaving. They speak about the sadness of what Afghans have endured and what is likely to come for them in the years ahead.

They also contemplate what the war will look like now without U.S. military forces on the ground in the Afghanistan.

0 thoughts on “Afghanistan War: US Military Withdrawal Is Sad End To Loathsome Occupation”