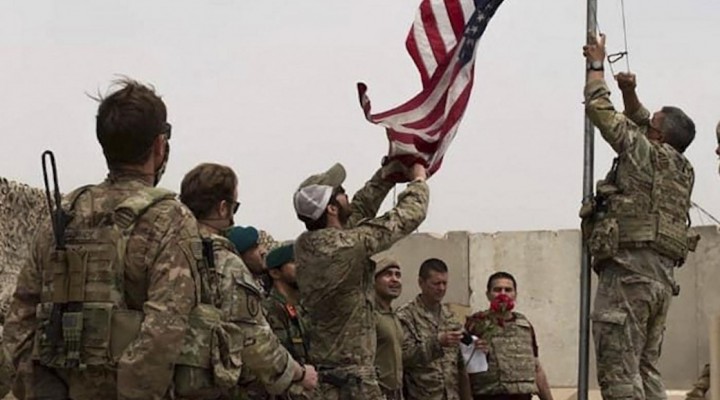 Without even notifying the local Afghan commander on the night of 2 July, US troops abandoned Bagram airbase, their most important military hub in Afghanistan for the past two decades. The base’s evacuation was part of the US withdrawal from Afghanistan after two decades spent fighting al-Qaeda and the Taliban, and trying half-heartedly to rebuild a state.

US President Joe Biden made an impassioned case for this decision, insisting that his country could no longer afford the human cost and strategic distraction. He argued that the initial US objective of routing al-Qaeda and eliminating Osama bin Laden had been achieved, and denied that his country entered Afghanistan to rebuild it.

Just for the record, its initial objective was accomplished 10 years ago; as for nation-building, the least that can be said is that the US genuinely strived to establish a pro-western regime, but failed, as Britain did in the 19th century and the Soviet Union did in the 20th.

Biden claims that “America is back” – a return to the world stage marked by more diplomacy and less confrontation, not least with its own allies. Washington has re-engaged its traditional European and Asian allies to contain Russia, compete with China, and renegotiate a more comprehensive nuclear deal with Iran. Biden chose Europe for his first foreign trip; held a virtual meeting with the other Quad members (Japan, India and Australia) focused on a new Indo-Pacific strategy; and may soon visit major US allies in Asia.

The new US policy is also characterised by an initial military disengagement from western Asia, exemplified by the decision on Afghanistan.

As far as the Middle East is concerned, it is still too early to conclude whether the disengagement is real, or merely a disguised repositioning. It is also unclear as to whether, or how, this will affect the region’s power balance, primarily Washington’s strong bonds with Israel and certain Gulf states. For the time being, the two main US military assets in the area remain untouched – Al Udeid air base in Qatar and the naval base in Bahrain.

Any assessment will be more conclusive once we know what the Biden administration really intends to do concerning the US military presence in Syria and Iraq. It would seem odd to remove a big contingent from a hostile and unmanageable environment such as Afghanistan, while maintaining tiny ones in similarly difficult areas such as Syria and Iraq.

Is Biden simply continuing on where his predecessor, Donald Trump, left off? As far as we know, the new administration has not rejected the military posture adopted in 2018.

Any sober evaluation of these issues cannot ignore Washington’s security and military establishment, also known as the “Blob”, and the die-hard views it still nurtures. The establishment still seems to have a herd immunity to critical re-evaluation. It also appears inexorably inclined to consider any US disengagement as a sign of weakness easily exploitable by its enemies.

The mere fact that withdrawing US military personnel from a conflict zone may cause more problems, rather than create advantages, for US foes, appears to have escaped Washington’s many Blobbers. Russia’s and China’s initial concerns about a US withdrawal from Afghanistan are a case in point.

Chinese workers were recently targeted by a terrorist attack in Pakistan, while the Russian newspaper Kommersant published an astonishing scoop – neither confirmed nor refuted by a Kremlin spokesperson – asserting that President Vladimir Putin offered Biden the possibility of using two Russian military bases in Central Asia to jointly coordinate efforts to control the situation in Afghanistan.

The US exit from the “graveyard of empires” is already complicating the political and security calculus of its main enemy in the region, Iran, while also decreasing the leverage it has enjoyed for so many years by having American soldiers on hand as easy targets in its asymmetric warfare against their deployment in the region.

Similar thinking could be applied to other hot spots. Has anyone in Washington really considered how poisonous a fruit an unmanageable and tribal Iraq could be to its eastern neighbour, despite 15 centuries of religious affinity?

Have they assessed whether is it worth maintaining a few soldiers in Syria, when President Bashar al-Assad has re-established his grip on the “useful” parts of the country, only to maintain an economic siege that is strangling its already exhausted people?

When will US planners understand that sometimes a lesser military footprint abroad may be a more effective one?

Of course, there is also a strong case for claiming that the major threat to western democracies is domestic, rather than foreign. Unfortunately, the US administration and its allies remain oblivious to such an inconvenient reality. This is not surprising, considering they are not ready to offer even an inch of self-criticism for the serial mistakes that have determined this new, uncomfortable global strategic environment.

Apart from such considerations, the new US military posture deserves attention for its potential impact on global politics and security.

The US updated its military doctrine in the aftermath of the Cold War. This was done by neocons already concealed inside the first Bush administration. The document that was adopted, titled Defense Planning Guidance FY 1994-1999, soon became informally known as the Wolfowitz Doctrine, for the then-undersecretary of defence for policy who oversaw its drafting. In essence, it aimed to ensure US hegemony, preventing the emergence of any rival superpower in Europe, Asia or the territory of the former Soviet Union.

The US posture was updated after 9/11, reflecting the new concern for the war against terrorism. And in 2018, Trump further reviewed it in light of “an increasingly complex global security environment … and the re-emergence of long-term, strategic competition between nations”. The US readiness to fight two contemporary regional wars was apparently dropped, while the perceived assertiveness of China and Russia came to the fore.

Considering the blunders over the last two decades, the sooner the Blob comes to appreciate the benefits of a reduced US military footprint in certain areas, the sooner it will devise a more effective overall strategy for dealing with Russia and China as well.

The calculated US disengagements may push its rivals to face certain inconvenient and not easily manageable responsibilities. This may be a better strategy than trying to relentlessly check their moves everywhere, at the expense of American taxpayers, and with often inconclusive and frustrating results.

One’s memory goes immediately to the marvellous trap packaged for the Soviet Union in Afghanistan in 1979.

But will Russia and China step into new traps? After all, Putin and Chinese President Xi Jinping can more easily afford to ignore their respective Blobbers, if they even exist. But what they will not ignore are the clumsy US  moves that have pushed Beijing and Moscow, and to a certain extent Tehran, to constantly increase their coordination in the Eurasian theatre.

The most important issue concerning US strategic thinking is its capacity to read the tea leaves, rather than rely on wishful thinking – and above all, to avoid acting in a way that ultimately turns its worst forecasts into self-fulfilling prophecies.