HOME / WORLD / A Saigon moment in the Hindu Kush 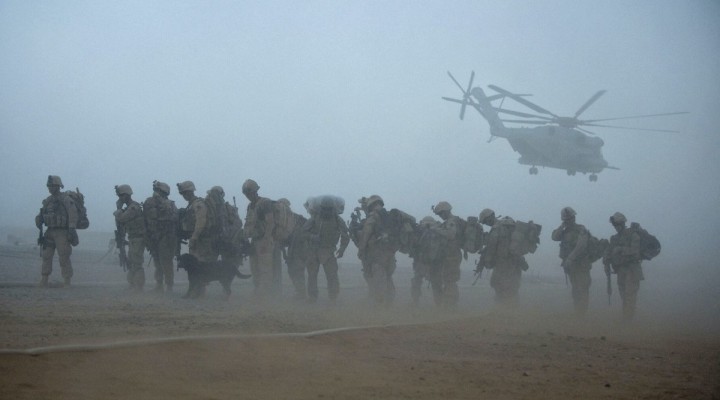 And it’s all over

For the unknown soldier

For the unknown soldier

The Doors, “The Unknown Soldier”

Let’s start with some stunning facts on the Afghan ground.

The Taliban are on a roll. Earlier this week their PR arm was claiming they hold 218 Afghan districts out of 421 – capturing new ones every day. Tens of districts are contested. Entire Afghan provinces are basically lost to the government in Kabul, which has been de facto reduced to administer a few scattered cities under siege.

Already on July 1, the Taliban announced they controlled 80% of Afghan territory. That’s close to the situation 20 years ago, only a few weeks before 9/11, when Commander Ahmad Shah Masoud told me in the Panjshir valley , as he prepared a counter-offensive, that the Taliban were 85% dominant.

Their new tactical approach works like a dream. First, there’s a direct appeal to soldiers of the Afghan National Army (ANA) to surrender. Negotiations are smooth and deals fulfilled. Soldiers in the low thousands have already joined the Taliban without a single shot fired.

Mapmakers cannot upload updates fast enough. This is fast becoming a textbook case of the collapse of a 21st-century central government.

The Taliban are fast advancing in western Vardak, easily capturing ANA bases. That is the prequel for an assault on Maidan Shar, the provincial capital. If they gain control of Vardak, then they will be literally at the gates of Kabul.

After capturing Panjwaj district, the Taliban are also a stone’s throw away from Kandahar, founded by Alexander the Great in 330 BC and the city where a certain mullah Omar – with a little help from his Pakistani ISI friends – started the Taliban adventure in 1994, leading to their Kabul power takeover in 1996.

The overwhelming majority of Badakhshan province – Tajik majority, not Pashtun – fell after only four days of negotiations, with a few skirmishes thrown in. The Taliban even captured a hilltop outpost very close to Faizabad, Badakhshan’s capital.

I tracked the Tajik-Afghan border in detail when I traveled the Pamir highway in late 2019. The Taliban, following mountain tracks on the Afghan side, could soon reach the legendary, desolate border with China’s Xinjiang in the Wakhan corridor.

The Taliban are also about to make a move on Hairaton, in Balkh province. Hairaton is at the Afghan-Uzbek border, the site of the historically important Friendship Bridge over the Amu Darya, through which the Red Army departed Afghanistan in 1989.

ANA commanders swear the city is now protected from all sides by a five-kilometer security zone. Hairaton has already attracted tens of thousands of refugees. Tashkent does not want them to cross the border.

And it’s not only Central Asia; the Taliban have already advanced to the city limits of Islam Qilla, which borders Iran, in Herat province, and is the key checkpoint in the busy Mashhad to Herat corridor.

The extremely porous, geologically stunning Tajik-Afghan mountain borders remain the most sensitive case. Tajik President Emomali Rahmon, after a serious phone call with his Russian counterpart Vladimir Putin, ordered the mobilization of 20,000 reservists and sent them to the border.

The Taliban, for their part, officially declared that the border is safe and they have no intention of invading Tajik territory. Earlier this week even the Kremlin cryptically announced that Moscow does not plan to send troops to Afghanistan.

A cliffhanger is set for the end of July, as the Taliban announced they will submit a written peace proposal to Kabul. A strong possibility is that it may amount to an intimation for Kabul to surrender and transfer full control of the country.

The Taliban seem to be riding an irresistible momentum, especially when Afghans themselves were stunned to see how the imperial “protector,” after nearly two decades of de facto occupation, left Bagram airbase in the middle of the night.

Compare it to the evaluation of serious analysts such as Lester Grau, explaining the Soviet departure over three decades ago:

When the Soviets left Afghanistan in 1989, they did so in a coordinated, deliberate, professional manner, leaving behind a functioning government, an improved military and an advisory and economic effort insuring the continued viability of the government. The withdrawal was based on a coordinated diplomatic, economic and military plan permitting Soviet forces to withdraw in good order and the Afghan government to survive.

The Democratic Republic of Afghanistan (DRA) managed to hold on despite the collapse of the Soviet Union in 1991. Only then, with the loss of Soviet support and the increased efforts by the Mujahideen (holy warriors) and Pakistan, did the DRA slide toward defeat in April 1992. The Soviet effort to withdraw in good order was well executed and can serve as a model for other disengagements from similar nations.

When it comes to the American empire, Tacitus once again applies: “They have plundered the world, stripping naked the land in their hunger… They are driven by greed, if their enemy be rich; by ambition, if poor…. They ravage, they slaughter, they seize by false pretenses, and all of this they hail as the construction of empire. And when in their wake nothing remains but a desert, they call that peace.”

In the wake of the hegemon, deserts called peace include in varying degrees Iraq, Libya, Syria – which happen to, geologically, harbor deserts – as well as the deserts and mountains of Afghanistan.

It looks like Think Tank Row in DC, between Dupont and Thomas circles alongside Massachusetts Avenue, have not really done their homework on Pashtunwali – the Pashtun honor code – or on the ignominious British empire retreat from Kabul.

Still, it’s too early to tell whether what is being spun as the US “retreat” from Afghanistan reflects the definitive unraveling of the Empire of Chaos. That’s especially true because this is not a “retreat” at all: it’s a repositioning – with added elements of privatization.

At least 650 “US forces” will be protecting the sprawling embassy in Kabul. Add to that possibly 500 Turkish troops – which means NATO – to protect the airport, plus an undeclared number of “contractors,” aka mercenaries, and an unspecified number of special forces.

Pentagon head Lloyd Austin has come up with the new deal. The militarized embassy is referred to as Forces Afghanistan-Forward. These forces will be “supported” by a new, special Afghan office in Qatar.

The key provision is that the special privilege to bomb Afghanistan whenever the US feels like it remains intact. The difference is in the chain of command. Instead of General Scott Miller, so far the top US commander in Afghanistan, the bomber-in-chief will be General Frank McKenzie, the head of CENTCOM.

So future bombing will come essentially from the Persian Gulf – what the Pentagon lovingly describes as “over the horizon capability.” Crucially, Pakistan has officially refused to be part of it although, in the case of drone attacks, they will have to fly over Pakistani territory in Balochistan.

The Taliban, for their part, are unfazed. Spokesman Suhail Shaheen was adamant that any foreign troops that are not out by the 9/11 deadline will be regarded as – what else? – occupiers.

Whether the Taliban will be able to establish dominance is not an issue; it’s just a matter of when. And that leads us to the two really important questions:

Every thinking mind across Central and South Asia knows that the Empire of Chaos, for two long decades, was never interested in defeating the Taliban or fighting for “the freedom of the Afghan people.”

The key motives were

What China and SCO want

Now compare all of the above with the Chinese approach.

Unlike Think Tank Row in DC, Chinese counterparts seem to have done their homework. They understood that the USSR did not invade Afghanistan in 1979 to impose “popular democracy” – the jargon then – but was in fact invited by the quite progressive UN-recognized Kabul government at the time, which essentially wanted roads, electricity, medical care, telecommunications and education.

As these staples of modernity would not be provided by Western institutions, the solution would have to come from Soviet socialism. That would imply a social revolution – a convoluted affair in a deeply pious Islamic nation – and, crucially, the end of feudalism.

None of these feudal lords were interested in the abolition of poverty and economic development in Afghanistan.

China is now picking up where the USSR left. Beijing, in close contact with the Taliban since early 2020, essentially wants to extend the $62 billion China-Pakistan Economic Corridor (CPEC) – one of the Belt and Road Initiative flagship projects – to Afghanistan.

The first, crucial step will be the construction of the Kabul-Peshawar motorway – through the Khyber Pass and the current border at Torkham. That will mean Afghanistan de facto becoming part of CPEC.

It’s all about regional integration at work. Kabul-Peshawar will be one extra CPEC node that already includes the construction of the ultra-strategic Tashkurgan airport on the Karakoram highway in Xinjiang, only 50 kilometers away from the Pakistani border and also close to Afghanistan, as well as to Gwadar port in Balochistan.

In early June, a trilateral China-Afghanistan-Pakistan meeting led the Chinese Foreign Ministry to unmistakably bet on the “peaceful recovery of Afghanistan,” with the joint statement welcoming “the early return of the Taliban to the political life of Afghanistan” and a pledge to “expand economic and trade ties.”

So there’s no way a dominant Taliban will refuse the Chinese drive to build infrastructure and energy projects geared towards regional economic integration – the mullahs’ side of the bargain being to keep the country pacified and not subject to jihadi turbulence of the ISIS-Khorasan variety capable of spilling over to Xinjiang.

The Chinese gameplay is clear: the Americans should not be able to exert influence over the new Kabul arrangement. It’s all about the strategic Afghan importance for Belt and Road – and that is intertwined with discussions inside the Shanghai Cooperation Organization (SCO), incidentally founded 20 years ago, and which for years has advocated for an “Asian solution” for the Afghan drama.

The discussions inside the SCO regard the NATO projection of the new Afghanistan as a jihadi paradise controlled by Islamabad as not more than wishful thinking nonsense.

It will be fascinating to watch how China, Pakistan, Iran, Russia and even India will fill the vacuum in the post-Forever Wars era in Afghanistan. It’s very important to remember that all these actors, plus the Central Asians, are full SCO members (or observers, in the case of Iran).

Tehran plausibly might interfere with potential imperial plans to bomb Afghanistan from the outside – whatever the motive. On another front, it’s unclear whether Islamabad or Moscow, for instance, would help the Taliban to take Bagram. What’s certain is that Russia will take the Taliban off its list of terrorist outfits.

Considering that the empire and NATO – via Turkey – will not be really leaving, a distinct future possibility is an SCO push, allied with the Taliban (Afghanistan is also a SCO observer), to secure the nation on their terms and concentrate on CPEC development projects. But the first step seems to be the hardest: how to form a real, solid, national coalition government in Kabul.

History may rule that Washington wanted Afghanistan to be the USSR’s Vietnam; decades later, it ended up getting its own second Vietnam, repeated as – what else? – farce. A remixed Saigon moment is fast approaching and yet another stage of the New Great Game in Eurasia is at hand.

0 thoughts on “A Saigon moment in the Hindu Kush”