HOME / Multimedia / Podcast: The Assassination of a Nuclear Scientist and the War against Iran’s COVID-19 Vaccine 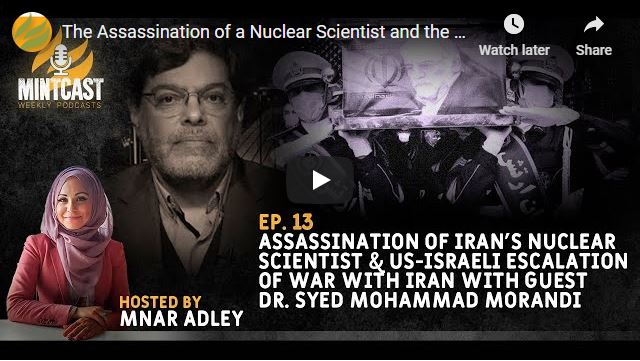 After Iran’s most senior nuclear scientist Mohsin Fakhrezadeh was assassinated last week the media has been abuzz about a non-existent nuclear weapons program, justifying a killing that masks a broader campaign to target Iran’s COVID vaccine program led by Fakhrezadeh.

Mohsen Fakhrizadeh, one of Iran’s most senior nuclear scientists, was assassinated in his car last week on the outskirts of Tehran. State sources in the Islamic Republic are claiming he was killed with a remote-controlled machine gun.

While no party has taken responsibility, the Iranian government has already pointed the finger at a number of suspects, chiefly Israel, the United States, and the People’s Mujahedin of Iran (commonly known as the MEK) a Washington-funded organization with the goal of overthrowing the Iranian government. Yet no party has claimed responsibility for the attack. At Fakhrizadeh’s funeral, Defense Minister Amir Hatami vowed that no crime as great as this would go unpunished and that the killing would not hinder Iran’s nuclear program.

Joining us today to discuss the assassination, its geopolitical context, and consequences, and what it means going forward for the U.S. and Iran, is Seyed Mohammad Marandi, an Iranian-American academic and political analyst. Seyed is a Professor of English Literature and Orientalism at the University of Tehran and a frequent guest on a wide range of news and political channels.

Dr. Marandi argues that not only was this assassination an act of war, but a direct attack against Iran’s COVID-19 vaccine program. Fakhrezadeh was not only Iran’s top nuclear scientist, he was also leading the research program for the Islamic Republic’s COVID vaccine. Because of crippling U.S. sanctions, Iran has been barred from importing masks, ventilators, and medical supplies to support the country in its fight against the virus.

COVID-19, Marandi argues, has been weaponized against Iran’s nearly 90 million citizens to destabilize the country to a degree that no other sanctions could have accomplished.

Both the US and Israel have a history of interfering in Iranian affairs. Ten months ago, Donald Trump personally gave the order to assassinate Iranian military leader and statesman, Qassem Soleimani while he was in Iraq for regional peace talks. Trump has also increased and expanded existing sanctions against the Islamic Republic and pulled the United States out of Obama’s nuclear deal with Iran.

With only weeks until Joe Biden is set to take up office in the White House, analysts are predicting that the assassination of Fakhrezadeh put the nail in the coffin for any worthwhile agreement between the two nations.

Fakhrizadeh’s death may have shocked Iranians, but it is unlikely to have surprised them, as his killing is the latest in a long line of political assassinations of high-ranking atomic scientists, at least five of whom have been murdered in the previous ten years. Some of them, like Masoud Ali Mohammadi and Majid Shahriar – both killed in separate car bombings in 2010- were Fakhrizadeh’s peers and coworkers.

0 thoughts on “Podcast: The Assassination of a Nuclear Scientist and the War against Iran’s COVID-19 Vaccine”