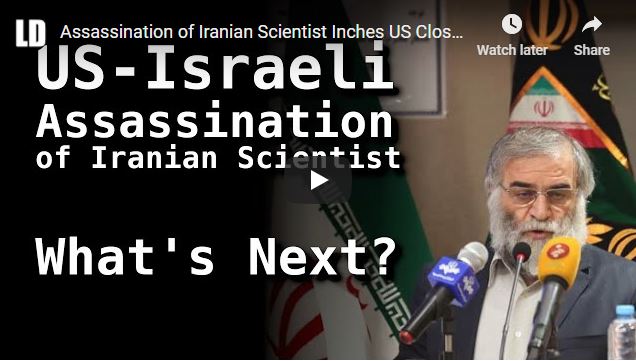 Reports on the death of senior Iranian nuclear scientist Mohsen Fakhrizadeh signals another dangerous turn in Washington’s systematic attempts to undermine and overthrow the current government of Iran.

The Western media is framing the assassination as a unilateral operation carried out by Israel with the New York Times in an article titled, “Assassination in Iran Could Limit Biden’s Options. Was That the Goal?,” claiming:

Intelligence officials say there is little doubt that Israel was behind the killing — it had all the hallmarks of a precisely timed operation by Mossad, the country’s spy agency. And the Israelis have done nothing to dispel that view.

But Mr. Netanyahu also has a second agenda.

“There must be no return to the previous nuclear agreement,” he declared shortly after it became clear that Mr. Biden — who has proposed exactly that — would be the next president.

The New York Times assumes that Biden genuinely wanted to return to the 2015 nuclear agreement – officially known as the The Joint Comprehensive Plan of Action (JCPOA) – and insists that it is up to Iran whether or not that possibility still remains.

If Iran holds off on significant retaliation, then the bold move to take out the chief of the nuclear program will have paid off, even if the assassination drives the program further underground.

And if the Iranians retaliate, giving Mr. Trump a pretext to launch a return strike before he leaves office in January, Mr. Biden will be inheriting bigger problems than just the wreckage of a five-year-old diplomatic document.

But there is a third option – if the US or Israel – or both – stage an event meant to look like an Iranian retaliation to help ensure the nuclear deal is permanently buried and only a path toward escalation lies ahead for Washington.

And this third option is the most likely. More than mere speculation – this conclusion is drawn from US policy papers produced by corporate-funded policy think tank – the Brookings Institution.

Their 2009 paper (PDF) titled, “Which Path to Persia? Options for a New American Strategy toward Iran,” had not only called for the US to disingenuously offer Iran an opportunity to escape from under US sanctions, but admitted that the offer would be deliberately sabotaged by the US and used as a pretext toward further escalation.

Thus the JCPOA was doomed before it was even signed in 2015 – with US policymakers fully determined to scrap it at the most opportune time and then incrementally ratchet up pressure on Iran.

And while the US posed as “peacemaker” with Iran in 2015 – at the same time it waged proxy war on Iran’s closest ally in the region – Syria – aiming to overthrow the Syrian government and thus further isolating and encircling Iran itself.

Two quotes in particular from the 2009 Brookings document are revealing in regards to the ill-fated JCPOA and what is most likely to follow this most recent assassination as well as the prospects for Biden’s “desire” to restart the deal after taking office next year.

…it would be far more preferable if the United States could cite an Iranian provocation as justification for the airstrikes before launching them. Clearly, the more outrageous, the more deadly, and the more unprovoked the Iranian action, the better off the United States would be. Of course, it would be very difficult for the United States to goad Iran into such a provocation without the rest of the world recognizing this game, which would then undermine it. (One method that would have some possibility of success would be to ratchet up covert regime change efforts in the hope that Tehran would retaliate overtly, or even semi-overtly, which could then be portrayed as an unprovoked act of Iranian aggression.)

Next, the document claims:

In a similar vein, any military operation against Iran will likely be very unpopular around the world and require the proper international context—both to ensure the logistical support the operation would require and to minimize the blowback from it. The best way to minimize international opprobrium and maximize support (however, grudging or covert) is to strike only when there is a widespread conviction that the Iranians were given but then rejected a superb offer—one so good that only a regime determined to acquire nuclear weapons and acquire them for the wrong reasons would turn it down. Under those circumstances, the United States (or Israel) could portray its operations as taken in sorrow, not anger, and at least some in the international community would conclude that the Iranians “brought it on themselves” by refusing a very good deal.

Creating the deal, sabotaging it, and using it as a pretext to pursue military aggression against Iran was always the plan – long before the JCPOA was ever signed.

With prospects of the plan being revived already unlikely – and more so with this recent escalation – the only path left and just as Brookings in their 2009 paper planned years ago, is toward wider conflict between the US and Iran.

Whether this conflict unfolds as American policymakers envisioned over a decade ago or US power in the Middle East evaporates before this plan is fully realized – only time will tell – and depends widely on not only Iran’s patience and skill – but also on that of its allies in Moscow and even Beijing.

For the US who still clings to the illusion of leading a “rules based international order” – assassinating scientists half-way across the planet either directly or through its Israeli proxies – is only further evidence of just how desperately the world needs to move on with such an order left far behind.