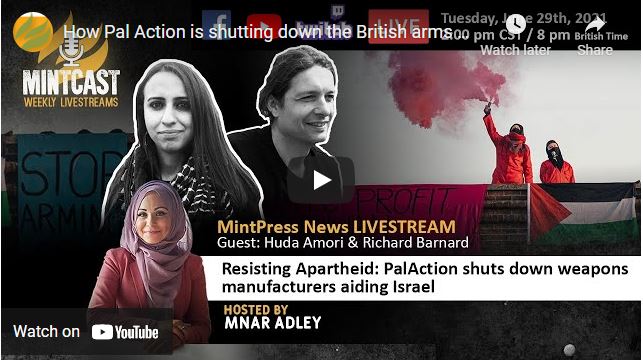 Palestine Action has made headlines for its forceful commitment to shutting down the arms trade between Israel and the U.K., trying to do with direct action what anti-war organizations have long been calling for.

Despite the official ceasefire, Sheikh Jarrah in Jerusalem continues to be a flashpoint of violence. Last week, Israeli forces fired stun grenades and sprayed skunk water on worshippers and protesters gathering near the Al-Aqsa Mosque, the third holiest site in Islam. Evidently, new Prime Minister Naftali Bennett is willing to be as aggressive and provocative as his predecessor, Benjamin Netanyahu.

While the attacks on the Sheikh Jarrah neighborhood are new, the tactics and the violence against Palestinians is not. Upon Israel’s creation in 1948, between 750,000 and 1 million Arabs were ethnically cleansed off their land, with Israeli forces razing 500 towns and villages in order to make way for the construction of a Jewish state on top of an existing one. Year on year, Israel has progressively annexed more Palestinian land, leaving the indigenous population trapped in increasingly small pockets, often without the ability to leave.

Much has been made about the unshakeable U.S. support for Israel; the world’s only superpower plying the Apartheid State with aid and arms, as well as defending it from diplomatic censure. Yet Israel also has powerful backers in Europe. Chief among those is Great Britain. The British military has designated Israel as a “strategic partner” and has sold it over half a billion dollars worth of arms since 2015. U.K. forces also help train the IDF, with a small number of British soldiers stationed inside the country as well.

After the latest round of violence, which left more than 250 dead, Netanyahu personally thanked Prime Minister Boris Johnson for his “unwavering” support for his state’s actions.

Yet even as the Conservative government supports Israeli atrocities, a growing movement inside the U.K. is challenging their policies. Chief among these is the group Palestine Action. Still not even one year old, Palestine Action has made headlines for its forceful commitment to shutting down the arms trade between the two countries, trying to do with direct action what anti-war organizations have long been calling for. Last summer, the group defaced the London headquarters of Israeli arms company Elbit Systems. Since then, they have occupied and temporarily shut down a wide range of weapons factories across the country, including in Bristol, Runcorn, and Leicester.

To talk about this today, MintPress News is joined by Huda Ammori and Richard Barnard, the co-founders of Palestine Action. With Mnar Muhawesh and Alan MacLeod, Ammori and Barnard discuss direct action, Israeli crimes, and British complicity.

0 thoughts on “PalAction: Shutting Down the British Arms Trade to Israel”