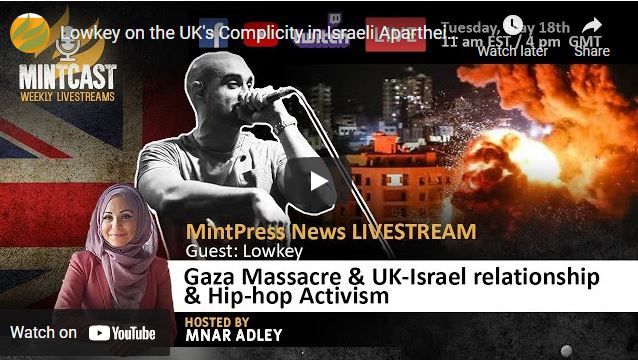 A patron of the Palestine Solidarity Campaign and a fierce critic of the Israeli government, Lowkey recently stated: “Zionism is not about your feelings; it is about the material reality of ethnic cleansing that has continued…till this day.”

Even as the Biden administration calls for calm to be restored across Israel, Gaza and the West Bank, on Monday it approved $735 million in new arms sales to Israel. U.S. weapons continue to be used in the onslaught against a civilian population. The death toll continues to rise and is now well above 200.

Last night, the Gazan Ministry of Health was attacked, along with the Al-Rimal Health Center. “This targeting of medical institutions is a war crime,” said Deputy Minister for Health Dr. Youssef Abu Al-Rish.

The bombs that destroyed the apartment block housing the Al-Jazeera and Reuters news outlets over the weekend were made in the U.S. and there is mounting scrutiny of the American position, with prominent political figures like Bernie Sanders and Alexandria Ocasio-Cortez calling for a change in policy.

Palestinian activists are organizing a general strike nationwide in an attempt to generate economic consequences to the bombardment, which Israeli Prime Minister Benjamin Netanyahu has asked the United States’ permission to carry on for two to three more days.

While most know that the U.S. government is a strong backer of Israel, the United Kingdom also leads in unfettered support for the Jewish state, with a new U.K. military strategy document describing Israel as a “key strategic partner.” Investigative journalists at Declassified UK recently revealed the deep connections between the militaries of the two countries, with Britain training and arming the IDF as well as supplying it with weapons and helping it maintain its nuclear capabilities.

This is over the vocal opposition of much of the British public, with between 100,000 and 150,000 people marching this weekend in London alone against the Israeli assault on Gaza.

Joining MintPress to discuss the latest developments is British-Iraqi rapper and political activist Kareem Dennis, better known as Lowkey. In a career spanning nearly two decades, and one that has taken him across the globe, Lowkey has established himself as an underground favorite of hip-hop junkies and music connoisseurs alike. Despite his acclaim, his music is rarely played on mainstream radio, precisely because of its political message, which covers war, imperialism and injustice. His track “Long Live Palestine” was released in 2009.

Lowkey has long been involved with activism in the Middle East and is a patron of the Palestine Solidarity Campaign. A fierce critic of the Israeli government, he recently stated that “Zionism is not about your feelings; it is about the material reality of ethnic cleansing that has continued…till this day.”