HOME / Multimedia / Why Must Palestinians Pay for Germany’s Crimes Against European Jews? Plus, Pinkwashing 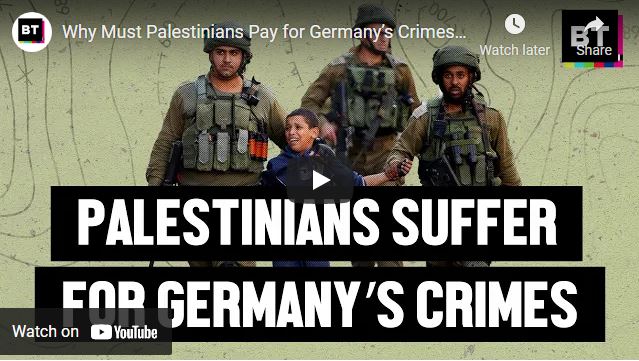 To discuss this phenomenon Rania Khalek is joined by Denijal Jegic, German author and post doctoral researcher at the Lebanese American University with a PhD in American studies who wrote about this topic for TRT in a piece titled, “Palestinians must suffer so Germany can feel better about its past.”

Rania and Denijal also discuss Israel’s pinkwashing — the use of LGBTQ+ rights to distract from occupation and war crimes — and how western countries have adopted these practices as a form of cultural imperialism against the Middle East.

4:00 How Palestinians pay for Germany’s crimes

7:33 History of anti-semitism in Germany

14:47 Germany’s political spectrum from left to right is anti-Palestinian

40:50 How being Yugoslavian shaped Denijal’s politics around Palestine and imperialism

Opus Dei and the Heart of America’s Terror Police State

0 thoughts on “Why Must Palestinians Pay for Germany’s Crimes Against European Jews? Plus, Pinkwashing”