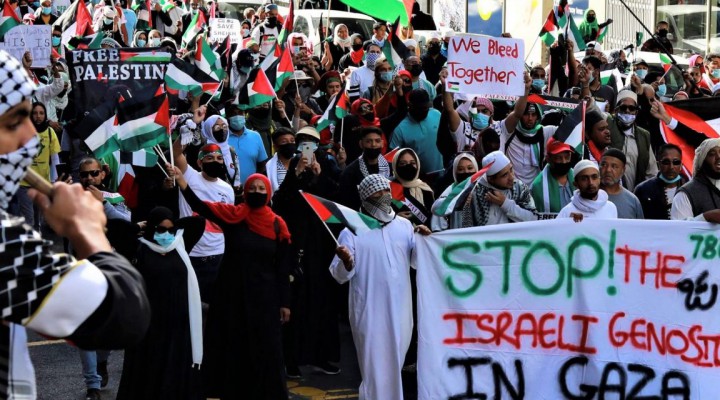 Building upon the prominent apartheid designation for Israel, the recent internationalist solidarity movement for Palestine needs to become a regular course of action.

As Israel intensified its recent bombing of Gaza, little did the settler-colonial state expect a global backlash that pointed to its colonialist violence and apartheid policies. Since the Israeli non-governmental organization B’Tselem declared Israel an apartheid state in January, followed in April by the Human Rights Watch (HRW) report documenting ample evidence to sustain its designation, the public has shifted its opinion on Israel.

Israel attempted to depict its latest aggression as Hamas against the Jewish people, though it has struck little credence outside of Zionist circles. On the contrary, Israel provided a spectacle of violence which proved both B’Tselem and HRW right, if further proof was needed.  While Israel displayed its military power, people assembled, protested, and others took further steps in immediate action, disrupting an otherwise smooth process of transferring weapons to Israel.

In Livorno, Italy, a port workers’ union, tipped off by Weapon Watch – a non-governmental organization based in Genoa – discovered an arms shipment was destined for the port of Ashdod, Israel. Taking immediate and mobilized action, the workers halted the ship’s journey, stating they will “not be an accomplice in the massacre of the Palestinian people.” The union also urged the Italian government to “suspend some or all military exports to the Israeli-Palestinian conflict areas.” Through a press release that was published on social media, the union called for inspections to be made onboard the “Asiatic Island” container ship after receiving a report that dozens of military vehicles were ready for boarding the vessel.

Israel described the activism as “economic warfare,” preferring to gloss over the actual disproportionate one-sided warfare the Israeli Defense Forces (IDF) were waging against the Palestinian people in Gaza and throughout the occupied territories.

Few mainstream news outlets picked up the story. The shipment eventually headed towards Naples, and the short-lived mobilized resistance on behalf of the port workers seemed destined to be lost amid the continuous, emerging reports of Israel’s atrocities in Gaza. Yet Naples rose to the occasion, and once again, an arms shipment destined for Israel was halted in mid-May, with S.I. Cobas (an Italian workers union) issuing a statement denouncing the Italian governments complicity over the arms shipment.

An arms shipment destined for Israel was halted in mid-May, with S.I. Cobas (an Italian workers union) issuing a statement denouncing the Italian governments complicity.

Days later, dockworkers in Durban, South Africa, refused to offload cargo from an Israeli ship that docked in the port, after being tipped off by the Palestine General Federation of Trade Unions. The South African Boycott, Divestments, and Sanctions (BDS) chapter supported the dockworkers’ action. “We salute our dockworkers and will continue to work in struggle with them to ensure that South Africa becomes an ‘apartheid free zone,’” BDS member Roshan Dadoo stated.

The union solidarity exhibited by Italian and South African workers is reminiscent of one notable historical strike action by Rolls Royce engineers in East Kilbride, Scotland, in 1974. Just one year into the US-backed Chilean dictatorship epitomized by dictator Augusto Pinochet, four workers refused to repair jet engines pertaining to the Chilean air force. The action in solidarity with oppressed Chileans was taken within the context of an internationalist mobilization.

The workers’ union in Scotland had condemned the Chilean dictatorship and its human rights violations. Speaking on the 45th anniversary of the coup in 2018, Stuart Barrie – one of the engineers who took part in the strike – reflected: “It’s great there is the recognition of the action taken back then. Direct action like ours can get negative publicity but it was a matter of principle. We had the strength of the union behind us and that’s what gave us the freedom and confidence to stand up to Pinochet.”

At a time when the dissemination of human rights violations has become more accessible due to social media, international mobilization for the Palestinian cause can become a powerful course of action—if it is not tied solely to the more media-spectacular bouts of colonial aggression that place Israel under the spotlight.

The recent bombing of Gaza has shifted public opinion.

The recent bombing of Gaza has shifted public opinion. With a pending investigation into war crimes by the International Criminal Court, Israel’s expectation of public sympathy on a larger scale has failed. In addition, the distinct approach between activists’ and governments’ perceptions of Israeli colonial violence has reached a point beyond conciliation. Protests against Israeli violence and apartheid are continuing despite the ceasefire announcement on May 20.

If this momentum is sustained, governments are in for widespread scrutiny. Particularly, as they continue aiding and abetting Israel either through financing Israel’s military, as in the case of the US, or else through the defunct two-state diplomacy which is playing a major role in tacitly complying with Israel’s aggression in Gaza.

While Israel was busy bombing residential areas in Gaza on the pretext of taking out Hamas, the Biden administration approved a US$735 million weapons deal for the settler-colonial state. Israeli media has expressed concern over growing opposition to US military aid to Israel from within Congress. However, the majority still supports unconditional aid and US Vice-President Kamala Harris has already ruled out any change to the current status quo throughout Joe Biden’s tenure.

Israeli media has expressed concern over growing opposition to US military aid to Israel from within Congress.

The international community has parroted the Israeli narrative which blames Hamas – there is no change in this regard, other than the gradual insinuations through the years have become part of the mainstream narrative against Palestine.

On the other hand, the escalating impunity bequeathed to Israel by the international community is also fomenting global discontent and, as a result, a more formidable support for Palestine. Despite the ceasefire, the protests have not abated, owing largely to the Palestinian people’s articulation in showing the world that Israel’s aggression is not only about Sheikh Jarrah, or Jerusalem, or Gaza. It is about an entire colonization process in which the historical precedents influence the current settlement expansion and the Israeli desire to quell the bulwark of Palestinian resistance. This context is synonymous with Gaza and, for the first time in decades, it has visibly spread to all areas of colonized and occupied Palestine.

The actions of the port workers in Italy and South Africa were timely and helped to enhance understanding about governments’ complicity in Israel’s human rights violations. The wider struggle, however, necessitates organized and mobilized action that transcends this current moment, and resists the previous fading away as media hype calms down. Israel’s plans to colonize Palestine were not intermittent. Likewise, supporting the Palestinian anti-colonial resistance needs to follow an organized trajectory – one that defines protest not as an exclusive or isolated action, but a continuous expression of solidarity which will, in time, become a force that governments worldwide will have to reckon with.