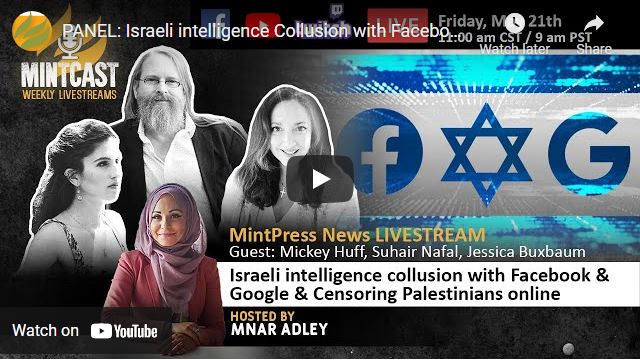 MintCast is joined by Mickey Huff, Suhair Nafal, and Jessica Buxbaum to discuss censorship and Israel’s collusion with Google and Facebook.

The ongoing assault on Palestine has captured the world’s attention. The latest violence was sparked by an attack on the Al-Aqsa Mosque in Jerusalem by Israeli security forces, resulting in over 300 casualties, as Muslims had gathered to celebrate Ramadan in the region’s holiest place of worship. Outside, far-right groups cheered as the mosque was damaged, and launched pogroms against non-Jews inside Israel.

In response, Hamas began firing rockets into Israel, which, in turn, spurred a massive Israeli retaliation that has seen hundreds killed, thousands injured, and forced tens of thousands to flee their homes.

Images of worshippers suffocating due to Israeli tear gas, Gazan buildings being leveled in airstrikes, and mortally wounded children have gone viral, reaching millions. But perhaps not as viral as they should have been if we had an open and uncontrolled social media ecosystem.

Palestinians the world over have reported having their content being taken down and their social media accounts blocked on a host of platforms — including Facebook, Instagram and TikTok — for spurious reasons, including anti-hate speech violations. When pressed for comment by MintPress, Facebook told us that their widespread suppression of Palestinian content at a time of such tensions was merely a technical error, stating:

We know there have been several issues that have impacted people’s ability to share on our apps, including a technical bug that affected Stories around the world, and an error which temporarily restricted content from being viewed on the Al Aqsa mosque hashtag page. While both issues have been fixed, they never should have happened in the first place. We’re so sorry to everyone who felt they couldn’t bring attention to important events, or who felt this was a deliberate suppression of their voice. This was never our intention.

Yet, even as they insisted nothing suspicious was afoot, MintPress CEO and Palestinian rights activist Mnar Muhawesh Adley had both her professional and private Facebook accounts restricted, just as thousands were turning to her for information and views. Other American outlets suffered similar consequences. The Grayzone reported that their interview with Palestinian journalists in Gaza was removed without explanation by YouTube.

This is, unfortunately, all too common a story for activists the world over. During U.S.-backed coup attempts in Venezuela and Bolivia, progressive and antiwar voices in those countries found themselves locked out of their suspended social media accounts at precisely the time it was most crucial for their voices to be heard, suggesting some sort of collusion.

In recent years, social media monopolies like Twitter, Facebook and Reddit have developed increasingly close links to the U.S. national security state. In November, Microsoft, Google, Amazon and IBM signed a contract with the CIA worth tens of billions of dollars to provide the agency with tech solutions and intelligence support, instantly making the firms among the largest military contractors in the world.

Silicon Valley is well aware of this, and is even leading the charge to turn social media into a weapon for the West. “What Lockheed Martin was to the twentieth century, technology and cyber-security companies [like Google] will be to the twenty-first,” boasted Google executives Eric Schmidt and Jared Cohen. All of this results in a situation where it is increasingly difficult to distinguish between big tech and big government.

Facebook has long worked alongside the NATO-cutout organization The Atlantic Council in order to determine what content is appropriate and what isn’t, effectively giving the national security state control over the world’s news feeds — the most influential source of information and news globally. And in 2019, a senior Twitter executive was unmasked as an active-duty officer in the British Army’s 77th Brigade — a unit dedicated to online warfare and psychological operations. Mainstream media almost completely ignored the revelation, and Gordon MacMillan is still head of editorial for the Middle East and North Africa on Twitter.

The Israeli state, too, has many deep connections with the social media giants. Israeli Justice Minister Ayelet Shaked boasted that she worked closely with Facebook to censor Palestinian voices, with the Silicon Valley corporation agreeing to take down around 95% of the content she asked them to. Today, former Director General of the Ministry of Justice Emi Palmor sits on Facebook’s advisory council, the board ultimately responsible for content moderation on the world’s largest news and social media platform. In her previous role in the Israeli government, Palmor directly oversaw the systematic ethnic cleansing of Palestine and the stripping of the Palestinians’ legal rights.

Discussing the big-tech censorship of Palestinian voices and the collusion between Israel and Silicon Valley are Mickey Huff, Suhair Nafal and Jessica Buxbaum.

Mickey Huff is Professor of Social Science and History at Diablo Valley College, California and is director of the media freedom foundation Project Censored. He hosts the Project Censored Radio Show. His latest book is “Project Censored 2021: State of the Free Press.”

Suhair Nafal is a Palestinian-American activist living in California. Earlier this year, she was taken to court by an IDF soldier who sought $6 million in damages after Nafal called her “evil” in a Facebook post. Bizarrely, the prosecution attempted to get the California judge to apply Israeli law to the post.

Jessica Buxbaum is an Israeli-American journalist based in Jerusalem and a contributor to MintPress News. Her latest article is “Facebook, Social Media Giants Admit to Silencing Palestinian Voices Online.”