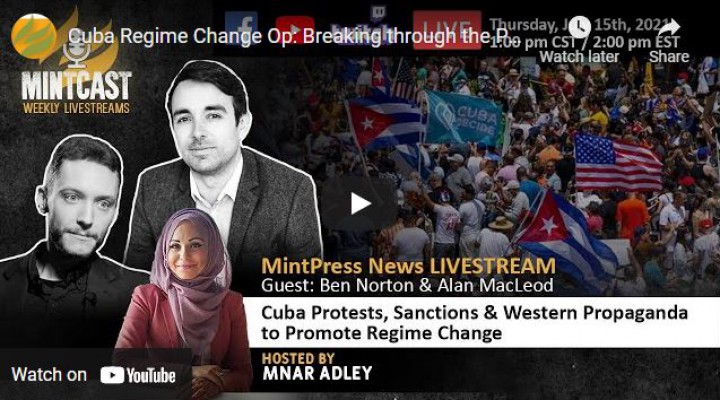 While there are plenty of reasons for ordinary Cubans to currently feel disenchanted about life on the island, there are also strong suspicions that these protests were not quite the grassroots uprising they were made out to be in the U.S. press.

Welcome to the MintCast Podcast — an interview series featuring dissenting voices the establishment would rather silence. I’m your host Mnar Adley.

A string of spontaneous protests in Cuba became the unlikely focus of worldwide media attention earlier this week, the story dominating headlines for two straight days. Political and media figures across the spectrum weighed in, including the President of the United States.

Joining me to discuss the protests, their causes, and the relationship between Cuba and the United States are Ben Norton and Alan MacLeod.

Ben Norton is a Nicaragua-based journalist, writer, and filmmaker. He is the assistant editor of investigative news outlet The Grayzone and the producer of the Moderate Rebels podcast, which he co-hosts with editor Max Blumenthal.

Alan MacLeod is Senior Staff Writer at MintPress News. An expert in the media and Latin America, his first book, entitled “Bad News From Venezuela: 20 Years of Fake News and Misreporting,” was published in 2018. Alan has lectured on Latin American politics at a number of universities.

“We stand with the Cuban people and their clarion call for freedom and relief from the tragic grip of the pandemic and from the decades of repression and economic suffering to which they have been subjected by Cuba’s authoritarian regime,” read a statement from the White House. “The Cuban people are bravely asserting fundamental and universal rights…The United States calls on the Cuban regime to hear their people and serve their needs at this vital moment rather than enriching themselves,” it added.

But even this unqualified support for the demonstrations was not enough for many in the Republican Party, who presented President Biden as a secret communist sympathizer. Mayor of Miami Francis Suarez demanded that the United States intervene militarily, telling Fox News that the U.S. should put together a “coalition of potential military action in Cuba.” Meanwhile, Florida Congressman Anthony Sabbatini called for regime change on the island and demanded that the U.S. execute the communist leadership.

The demonstrations began in San Antonio de los Baños in the western province of Artemisa, close to Havana, after a power cut left residents without air conditioning in the hot summer. However, with the help of social media, amplified by the anti-government expatriate community in Florida, they soon began to spread to dozens of other areas across the country, as Cubans made their discontent with the shortages of food and goods heard.

While there are plenty of reasons for ordinary Cubans to currently feel disenchanted about life on the island, there are also strong suspicions that these protests were not quite the grassroots uprising they were made out to be in the U.S. press.

The protests were led by the artistic and musical communities, two groups that American agencies USAID and the National Endowment for Democracy have for years been pumping tens of millions of dollars into, in an explicit attempt to sow discord and promote regime change. The latest House Appropriations Budget allocates $20 million this year to projects devoted to overthrowing the Cuban government through soft-power means, many of which directly target musicians and artists.

Life in Cuba is particularly hard of late, owing to the coronavirus-related economic collapse, which has seen tourism dwindle to almost zero and depleted the government’s reserves of foreign cash. On top of this, the Trump administration’s tightening of illegal sanctions hit the island hard, with crucial remittances from abroad effectively stopped.

The blockade continues to cripple Cuba and hamper its development. In 2014, the United Nations estimated that the sanctions had caused over $1 trillion worth of damage to the Caribbean nation. The explicit goal of the American blockade — active since 1960 — is to “decrease monetary and real wages, to bring about hunger, desperation and [the] overthrow of [the] government,” in the words of then-Deputy Assistant Secretary of State for Inter-American Affairs Lester D. Mallory.

“The U.S. has overtly and continuously said that the goal of the embargo is to destroy Cuba’s economy so that the government will collapse. So it’s not just reasonable, it’s obvious that the U.S. has some kind of hand in this,” Professor Aviva Chomsky, of Salem State University and author of “A History of the Cuban Revolution,” told MintPress.

MintPress News is a fiercely independent, reader-supported outlet, with no billionaire owners or backers. You can support us by becoming a member on Patreon, bookmarking and whitelisting us, and by subscribing to our social media channels, including Twitch, YouTube, Twitter and Instagram.