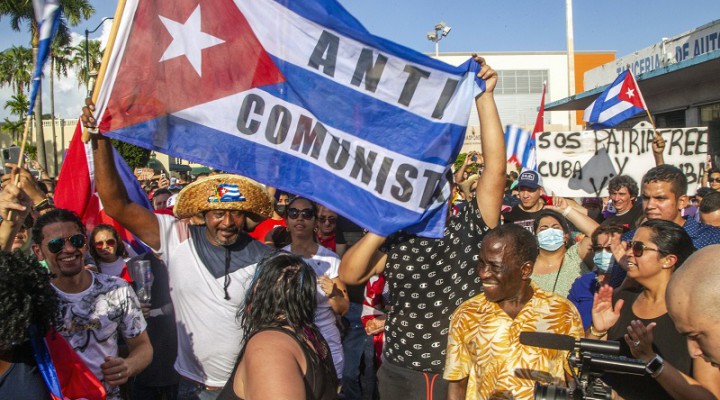 The domestic consequences of the global economic crisis caused by the world’s uncoordinated response to COVID-19 are being exploited as a cover for carrying out a US-backed Color Revolution attempt in Cuba, meaning that while some demonstrators might have legitimate grievances as do most of their peers across the world during this difficult time, there also are undoubtedly some who are actively trying to take advantage of this in order to overthrow their government.

Cuba’s back in the news after protests unexpectedly broke out in the capital. The participants claim that they’re demonstrating in response to their deteriorating socio-economic conditions caused by their government’s response to COVID-19 while the government accused them of being part of a US-backed plot to carry out a Color Revolution. The truth, like always, likely lies somewhere in the middle since the situation is much more complicated than either side portrays it as. It’s also made all the worse by American officials, including US President Biden, putting pressure on their Cuban counterparts for self-interested political reasons.

The island nation’s decades-long socio-economic challenges are the direct result of the US’ unilateral sanctions policy whereby it also threatens to impose so-called “secondary sanctions” against a wide array of foreign entities that might decide to do business in Cuba. The Cuban people, led by their country’s communist party, have valiantly persevered during this difficult time but the toll is still impossible to ignore. Observers also can’t dismiss the long-term psychological impact of the US’ pernicious information warfare campaign on shaping the youths’ perceptions of their future.

What’s happening right now is that COVID-19 exacerbated Cuba’s socio-economic problems and consequently created the pretext for Color Revolution “sleeper cells” to hit the streets. It would be amiss to accuse everyone who’s protesting of being a so-called “American agent” since the grievances that they have are legitimate ones that are presently shared by most of the global population to a certain extent. Nevertheless, the issue is that some of the demonstrators are blaming their government and in particular its communist ideology as being responsible for their woes, which isn’t an accurate assessment of the facts.

Those individuals are either connected to the US in some way or are at the very least behaving as its “useful idiots”, which suddenly transforms their superficially socio-economic protests into a pressing security threat considering their regime change intent. Official US statements might also hint at another wave of sanctions against the island nation strategically timed to further worsen the situation there in order to catalyze a self-sustaining cycle of unrest per the basics of Color Revolution theory. Deteriorating living standards might naturally prompt more protests, some of which could turn riotous and provoke the security services to respond.

The state’s defense of public order and the rule of law could then very easily be misportrayed through edited footage as being supposed evidence of so-called “unprovoked attacks against peaceful unarmed pro-democracy protesters”, which could then be the basis upon which more sanctions are imposed. Even so, however, that doesn’t necessarily mean that the government’s last days are near. They and the people that they represent survived much worse during the 1990s following the collapse of Cuba’s Soviet patron. There’s no reason to predict that the government will fall if the US imposes more sanctions and continues meddling in its affairs.

What’s most worrisome, however, is how the youths’ perceptions might continue to be shaped by the latest events. The US’ infowar modus operandi is to gradually sow the seeds of doubt into the minds of young people in every country whose government doesn’t fully comply with America’s diktats. Cuba’s been their target for decades, but it wasn’t until the information-communication technology (ICT) revolution of the 1990s onward that this began to have somewhat of a noticeable effect in Cuba. As the internet continues to proliferate and more young people become exposed to US narratives, some of them might lose faith in their country’s system.

It’s this demographic that’s the vanguard of every Color Revolution attempt even if they’re sometimes led by older folks, a few of whom might remain in the shadows but all of which are somehow or another tied to the US in the Cuban context. Realistically speaking, there’s only so much that the Cuban government can do for its people considering the crippling sanctions circumstances and the black swan event of COVID-19. No state’s response to the virus has been perfect and everyone across the world has suffered in some way. It’s delusional to imagine that everything would have been perfect in Cuba had it not been for the communists.

To the contrary, everything has developed as much as it has precisely because of those same communists who liberated Cuba from the US’ neo-imperialist grasp. The country used to be little more than a large plantation with a few brothels and casinos thrown in for American tourists’ entertainment. Although it has yet to reach Western socio-economic developmental levels, it’s still done fairly well for itself and survived so long despite all the odds, especially when remembering that it’s literally in what the US considers its own “backyard”. It’s this revolutionary spirit of principled resistance that kept Cuba going for as long as it has.

As such, it’s only natural that the US has aggressively targeted those ideals for decades. It’s thus far failed, but the global economic crisis brought about by COVID-19 created the perfect pretext for trying yet again, albeit under a different cover. Instead of being motivated by purely ideological pursuits like before, “sleeper cells” can now somewhat more plausibly claim to be driven by objectively existing socio-economic grievances, though misportrayed as the sole fault of the communists while ignoring the US sanctions factor. Washington wants to mislead as many youth as possible in order to indirectly assemble a critical mass of anti-government protesters.

With this insight in mind, there’s no doubt that the current events are indicative of a US-backed Color Revolution, but the protests are also inspired by the global economic crisis caused by COVID-19. Not everyone who’s upset with the status quo and particularly with what might be their declining living standards is an “American agent”, but those who defy the law and shout regime change slogans are at the very least “useful idiots” of their country’s nemesis. The situation is also being exploited by the US to threaten more sanctions, and it’s possible that it might become a partisan issue ahead of next year’s midterm elections too.