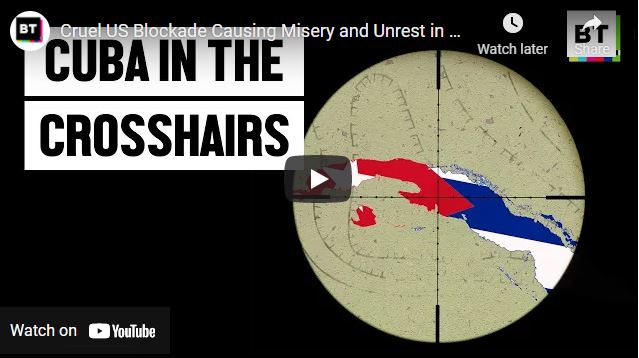 US officials and their corporate media mouthpieces were elated at the sight of protests in Cuba in recent days against deteriorating living conditions that are a direct result of the US blockade, which Trump increased and Biden has maintained during the pandemic to deliberately heighten suffering at a time when Cuba was sending doctors around the world to fight the disease.

As is often the case when an adversary country experiences protests of any kind, it was immediately weaponized to push for a regime change narrative against Cuba. There’s so much to unpack, from the protest double standards, to the blatant efforts at meddling and sabotage, to the pure hypocrisy from those in power.

To help make sense of it all, Rania Khalek was joined by Manolo De Los Santos, founder & co-director of The People’s Forum in New York City and a researcher with Tricontinental who spent six years living in Cuba.

You can listen to all episodes of Rania Khalek Dispatches anywhere you get podcasts.

2:47 Who was protesting in Cuba and why?
5:14 60 years of US blockade on Cuba tightened during the pandemic
11:20 Blockade as a US weapon for full spectrum dominance
12:42 Cuba’s excellent healthcare system, resistance and resilience
16:13 US history of assassinations, sabotage and terrorism in Cuba
23:31 Social media manipulation
24:26 Cuba before and after revolution
26:00 Why the Cuban revolution prevails
31:11 Cuba’s medical brigades
37:29 Is Cuba a dictatorship? No!
44:09 Left resurgence in Latin America & Cuba as central to the struggle
46:23 Rania’s electricity goes out
49:32 US reaction to left resurgence in Latin America