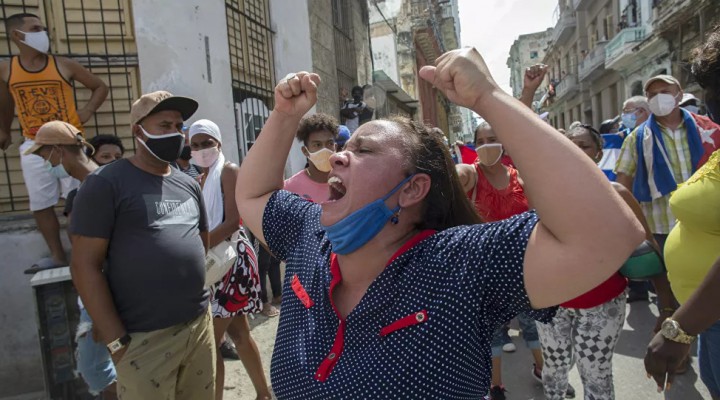 US corporate media are having a field day over public protests in Cuba that are being hailed as a revolt against the island’s communist government.

The protests are said to have been prompted by economic hardship which has been aggravated by the Covid-19 pandemic. Scarcely mentioned by the Western media is the proverbial elephant in the room. That is, Cuba has endured nearly 60 years of unremitting economic sanctions imposed on it by the US.

Can we please just focus on that vital background to the story and get our heads around the fact that the American government is a criminally hostile and lawless entity. The Caribbean country has been throttled and strangulated for over half a century by over a dozen American presidents whose malign conduct is no better than that of crime bosses.

Under President Trump, the economic blockade was tightened with new vindictive measures to hit the Cuban economy and population of 11 million. The new Biden administration has done nothing to reverse those harsher sanctions.

President Biden this week has the gall to say “the United States stands with the people” of Cuba in their protests. What Biden really means to say is the US is standing on the necks of Cubans.

Every year, the vast majority of countries at the United Nations general assembly make an appeal for Washington to lift its callous embargo on Cuba. Every year, Washington vetos that international call.

There is no legal justification for American sanctions on Cuba. It is an act of sheer spite because Cuba dared to have a socialist revolution in 1959 when it kicked out a US-backed dictator and American businesses that were exploiting the people to the hilt. Cuba then became the “threat of a good example” to the rest of the hemisphere also plagued by American imperialism and predation. It had to be punished and destroyed so that others would not repeat the rejection of Uncle Sam and his crime syndicate.

© AP PHOTO / RAMON ESPINOSA
An American classic car and bicycle share the road on the Malecon amid a cloud of Sahara dust in Havana, Cuba, Thursday, June 25, 2020.

Amazingly, Cuba and its revolution have survived against impossible odds and brought its people many successes in social development. It also inspired other Latin American nations to follow its path despite Washington’s unforgiving barbarity. America likewise sanctions Venezuela and Nicaragua because of their socialist governments, thereby making social misery and suffering in those countries as well.

It cannot be overstated. American economic sanctions are criminal. They are nothing short of economic warfare and aimed deliberately at making life unbearable for the population in order to destabilize the government and incite revolt.

When US media blithely mention “sanctions” on Cuba that is a monstrous feat of hypocrisy. Washington should be unequivocally condemned for crimes against humanity and aggression towards a peaceful nation.

The media silence in the face of this appalling barbarity really demonstrates the cowardice and propaganda function of the US corporate media.

The Cuban people have been subjected to a siege of terror for six decades. That state-sponsored terrorism by the United States has involved attempted military invasion (the Bay of Pigs in 1961), the threat of nuclear annihilation (1962 missile crisis), countless assassination plots against the late leader Fidel Castro and other government figures, biological warfare to destroy the island’s agriculture, as well as mass murder as in the CIA bombing of a Cuban civilian airliner in 1976 which killed 73 people.

The psychopathic US rulers have ratcheted up economic warfare against the people of Cuba during a worldwide pandemic, limiting Cuba’s access to medicines and other vital imports.

Not only that but there are grounds to believe that the relatively small protests that have erupted across Cuba have been instigated by Washington and its paid-for “opposition figures”.

It has all the hallmarks of a “color revolution” orchestrated by US intelligence and the ever-pliant news media who are scripting a “pro-democracy” uprising.

However, such American media claims should be disdained with contempt. Pathetically, the corporate-controlled media have never stood up during 60 years to tell the truth about the American government and its criminal covert war on the Cuban people. Whatever they “report” now about Cuba should be dismissed as yet more distortion and fabrication in the service of Uncle Sam.

0 thoughts on “Shameless US Hypocrisy on Cuba”