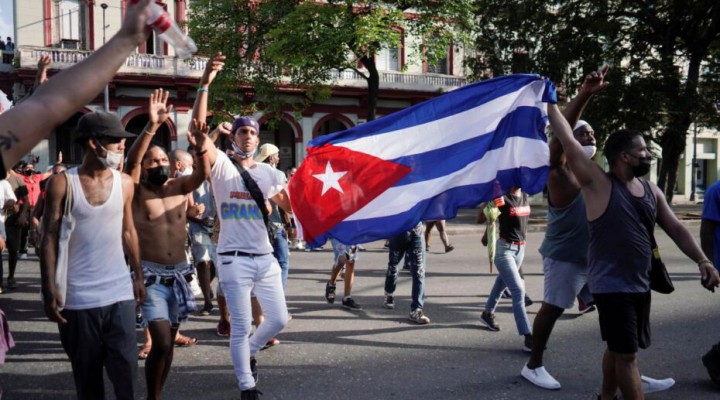 Uncle Sam is not going to like Moscow and Beijing making inroads into his self-declared “backyard”. But Uncle Sam has lost all moral authority to make serious objections.

A rash of public protests to hit Cuba was described by the White House as “spontaneous expressions of people exhausted with economic mismanagement and repression”. President Joe Biden said the “United States stands with the people of Cuba as they bravely assert for their fundamental and universal rights.”

The protests appear to have subsided as quickly as they erupted at the weekend. Cuban President Miguel Diaz-Canel has acknowledged there are legitimate grievances of material hardship borne by the 11 million population of the Caribbean island. Large counter-demonstrations of pro-government supporters responded to the president’s call to defend the country’s revolution.

The Cuban authorities accuse the United States of orchestrating the protests to destabilize the socialist nation which has been embattled by nearly six decades of the economic blockade imposed by Washington. The economic sanctions were ratcheted up recently under President Donald Trump while the new Biden administration has maintained the crippling restrictions.

During the past year of the Covid-19 pandemic, the Cuban economy has suffered tremendously and it is impossible to escape the conclusion that Washington’s sanctions are calculated to exploit the unique adversity of the pandemic. The country’s tourism industry has collapsed and social measures to limit the spread of the disease have badly impacted employment and livelihoods. That, in turn, has exacerbated food shortages and consumer price inflation.

In coping with increased hospitalizations from the pandemic that has created power outages as the authorities try to ration resources to prioritize medical facilities.

All of this has, of course, led to huge social frustration and recriminations against the government for what can be easily perceived as “mismanagement”. But let’s be clear, the perceived mismanagement is not primarily an internal cause. The responsibility for Cuba’s plight lies squarely with Washington’s pursuit of its criminal embargo on the island.

The American economic sanctions leveled on Cuba since 1961 were always deliberately imposed to make the people suffer deprivation and hardship in order to alienate them from the socialist government and thereby stoke unrest. This aggression by Washington is a blatant violation of the United Nations Charter. Year after year, the US government ignores appeals by the vast majority of countries at the UN general assembly to revoke its sanctions.

At a normal time, such callous conduct is appalling. But during a year of a global pandemic where health resources are stretched and populations even more vulnerable, the US embargo on Cuba is an abomination.

Not that Cuba is alone is enduring this American barbarity. Many other nations, including Iran, North Korea, Syria, Venezuela, Nicaragua and Russia, are also subjected by varying degrees to the economic warfare of American sanctions at a globally dangerous time.

There is little doubt the imperial planners in Washington smelled blood in regard to Cuba’s, particularly weak position. It is notable that the State Department has allocated extra millions of dollars to intensify communication links from broadcasters in Florida where a large right-wing Cuban diaspora lives.

The latest protests which broke out last Sunday were presaged by a massive mobilization of social media influence. According to an analysis by Telesur, thousands of new media accounts were created in the days just before people took the streets. It appears to have been orchestrated by a sophisticated foreign state-level operation that implicates the United States.

The same Washington playbook has been used in agitating anti-government protests in Bolivia, Venezuela, Belarus and Nicaragua. Social media outlets become quickly saturated with memes and pundits inciting street demonstrations in a modus operandi that is far from spontaneous. The use of algorithms creates amplification of droves of protesters that is far disproportionate to the actual numbers.

When this kind of information onslaught is keyed with already existing popular discontent over economic difficulties then the instigators can smugly sit back and wait for the anticipated social explosion.

The Cuban government seems to have moved quickly to contain the instability. It has accused the United States of interfering in its internal affairs. Other Latin American countries have also sided with Havana to denounce foreign meddling.

Cuba has indeed major challenges and problems. But for the most part, the responsibility for that lies entirely with Washington and its criminal aggression. The American White House says it is “assessing how we can be helpful directly to the people of Cuba”. How about removing your decades-old jackboot from Cuba’s neck?

Russia and China should step up to offer Cuba much more economic and material support in order to give its courageous people the respite they need from suffering decades of economic warfare by the United States.

Uncle Sam is not going to like Moscow and Beijing making inroads into his self-declared “backyard”. But Uncle Sam has lost all moral authority to make serious objections. Russia and China should turn the tables on the American aggressor.