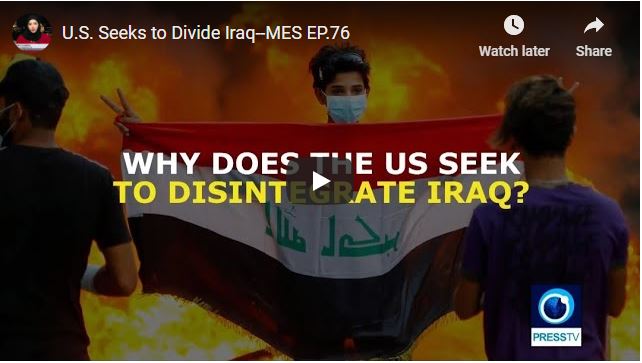 The US, pushed into a corner by Iraqi calls to expel the US occupying forces from their country, is seeking to split Iraq into three separate sectarian regions in order to maintain its troop presence in the region. By doing so, the US is seeking to stir more hatred and conflict in Iraq, in order to keep the country down. This allows the US to keep its forces inside of Iraq, simply by relocating them to elsewhere in the country, most probably into Iraqi Kurdistan.

The United Nations Children’s Fund (UNICEF) in a controversial move praised what it called Saudi Arabia’s “humanitarian” role in Yemen, closing its eyes to years of atrocities committed by Riyadh and its allies against the civilian population there, leaving a large number of children dead, maimed and malnourished. The move prompted immediate protests from human rights groups worldwide. To discuss this issue with us from Sydney is Dr. Tim Anderson, author and academic.