HOME / WORLD / The USA threatens Iraq: stop the attacks, or else 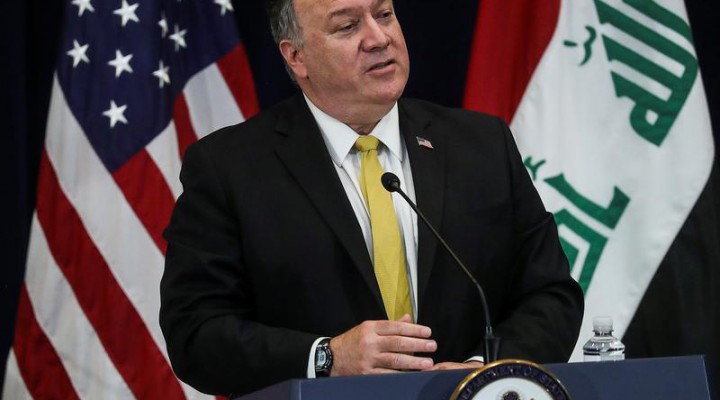 The US administration sent an official threat to the Iraqi government requesting it to prevent all insurgency attacks against its forces, especially against the US embassy in Baghdad. Otherwise, the US threatens dire consequences, including the use of military power, economic sanctions and political boycott against Iraq.

According to officials in Baghdad,  “US Secretary of State Mike Pompeo informed the President of the Republic, Barham Salih, Prime Minister Mustafa Al-Kazemi, and Speaker Muhammad al-Halbousi of the need to stop all attacks immediately, particularly against the US embassy in Baghdad; otherwise, the embassy will close its doors in the Iraqi capital.”

“The US will impose sanctions on 36 Iraqi persons who will be placed under an international warrant for arrest. The US administration will adopt measures that prevent any form of economic aid to Iraq, including preventing it from exporting its oil. Military options will be considered against the Popular Mobilisation Forces (PMF), in particular, “Asaib Ahl al-Haq” and “Kataeb Hezbollah Iraq”. The US forces are expected to target their bases and offices in Iraq in retaliation to the several rockets launched against the US embassy in Baghdad. These attacks should stop immediately.” This was the content of Pompeo’s message that was delivered to the highest Iraqi authorities.

Upon receiving the US threat, Prime Minister Mustafa Al-Kazemi informed all major political blocs, predominantly the Shiite, including regional players in Iran and Lebanon. Sources in Iran and Lebanon said that “any attack against foreign diplomatic missions is counterproductive and serves the enemies of Iraq and Iran.” Contacts were established with all known Iraqi resistance forces to make sure all attacks cease and for these forces to denounce attacks against foreign diplomatic missions.

“There is no doubt there are Iraqi groups which are not under Iran or PMF’s control. Iran would like to see US forces leaving the country. Prime Minister al-Kadhemi confirmed to Iran during his last visit that the US promised to leave Iraq before the end of this current year. There is a possibility that the US remains in Kurdistan, but that is another matter. All foreign forces must leave the country, and that is achievable without firing blind rockets or attacking convoys carrying US equipment but driven by Iraqi citizens. This is not the way to force the US forces to leave”, said the source.

Sayyed Muqtada al-Sadr, the Shia leader of the largest parliamentary bloc and the Sadrist group, proposed the formation of a military and parliamentary committees to investigate the attacks on the American embassy. Sayyed Muqtada also suggested to investigate all attacks against other diplomatic missions – such as Britain and the United Nations – and stressed the need for the government to restore its prestige and impose Security. Al-Khademi acknowledged Moqtada’s request and supported it.

However, a leading source in the Iraqi resistance said that “Sayyid Muqtada al-Sadr has his vendetta against Hashd al-Shaabi (PMF), especially Sheikh Qais Khazali, the leader of “the League of Righteous People” (Asaeb Ahl al-Haq). Sheikh Qais – who was leading Asaeb to the request of Sayyed Moqtada – defected from the Sadrist group after 2007 when British Special Forces arrested him in Basra.

The USA threatens Iraq: stop the attacks, or else …

0 thoughts on “The USA threatens Iraq: stop the attacks, or else”