HOME / WORLD / Can Al-Kadhemi walk the fine line between “domestic mines” and the Iran-US conflict on his soil? 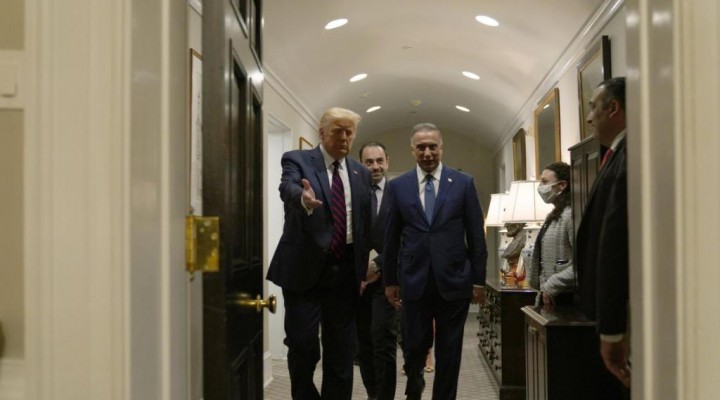 Iraq is entering a new and dangerous phase. When Iraqi Prime Minister Mustafa Al-Kadhemi visited Washington, President Donald Trump declared that US forces deployed in Iraq would not leave for three years. The Prime Minister finds himself pinned between multiple conflicts, internal, regional and international. No statesman, no matter how experienced, could master such a dangerous situation. Moreover, the Iraqi economy is in a catastrophic state: Iraq needs tens of billions of dollars annually that the government does not have to pay the salaries of millions of employees, create job opportunities, and build infrastructure to calm the anger in the street. People have high expectations from this young government, after the long deprivation caused by the political leaders who have ruled the country for less than two decades.

The same political party leaders who have misruled Iraq for over a decade expect Al-Kadhemi to seek US withdrawal and to organise parliamentary elections, nothing less. But Al-Kadhemi can’t deliver because he needs the international community to support his country financially. This international community expects Baghdad to protect their forces operating in Iraq and to stand against the Iraqi resistance. An impossible equilibrium, not because al-Kadhemi is new in the political arena but because it is impossible to ask for international financial support and to push the US out at the same time. Thus, where is Iraq heading?

Iraq is headed towards a gradual military escalation between the Iraqi resistance, supported by the main political parties, opposing US forces and Iraqi security forces commanded by al-Kadhemi. This threatens to create a dangerous and unstable situation in the country.

During his meeting with Al-Kadhemi, President Trump stated that he would not withdraw for three years. This statement was undoubtedly in response to what Sayyed Ali Khamenei, the leader of the Iranian revolution, said during his meeting with Al-Kadhemi a few weeks before. Sayyed Khamenei demanded that the US leave Iraq as the price to pay for the blood of Major General Qassem Soleimani, commander of the Quds Force, who was assassinated by Trump’s drone at Baghdad airport. Soleimani was on an official mission as announced by the (former) Iraqi Prime Minister Adel Abdul-Mahdi. Iraqi security forces commander Abu Mahdi Al-Muhandis was also killed by the US drone while in the company of Soleimani.  Trump boasted of his double assassination by saying: “Two in one blow.” It can be said that Trump – by opposing the Iraqi majority who want an immediate withdrawal of his troops – aimed to respond to Sayyed Khamenei by sending the aggressive message that he is staying in Iraq, against Tehran’s wishes. However, Trump and his team within the current administration don’t seem to realise that they have put themselves where Iran wants them to be. By refusing to accept the Iraqi parliament’s binding decision that foreign forces withdraw, the US is challenging the Iraqi parliamentary majority, which requested a US withdrawal within six months, not three years. Consequently, Iran is eager to see the US

0 thoughts on “Can Al-Kadhemi walk the fine line between “domestic mines” and the Iran-US conflict on his soil?”