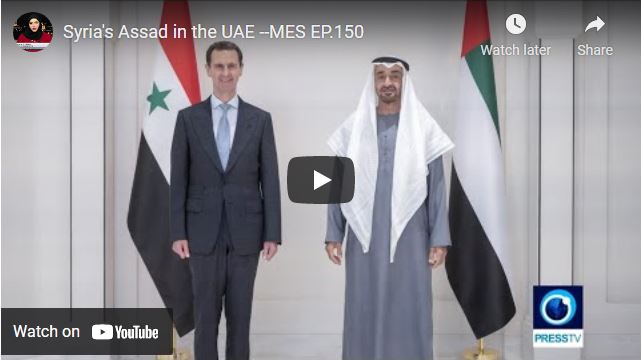 President Assad, whose plane arrived last Friday at Dubai International Airport, with a delegation accompanying him, which included Foreign Minister Faisal Al-Miqdad, his deputy Bashar Al-Jaafari, and Minister of Presidential Affairs Mansour Azzam, met upon his arrival the Ruler of Dubai, Mohammed bin Rashid, his deputy Mansour bin Zayed, and Adviser to the President of the Emirates Anwar Gargash.

Assad then met security figures before he met Abu Dhabi Crown Prince Mohammed bin Zayed, his security advisor Tahnoun bin Zayed and Minister of Foreign Affairs Abdullah bin Zayed. A one-day trip that was inclusive enough to raise eyebrows in Washington, which was very disappointed as per the state department statement.

To discuss this visit with us from Damascus is Mohamad Abbas Mohamad, retired Syrian Army general and political analyst.

The Iranian response to the recent attacks carried out by the Zionist entity agreed new messages and major changes at the strategic level in light of the international transformations, whether at the level of the Ukrainian crisis or the “Vienna” negotiations related to the agreement on the Iranian nuclear program.

The strategic patience that the republic relied on in the region has become among the variables, as the assassination of Iranian Revolutionary Guards officers in Syria, the launching of drones from Erbil towards Iranian military bases, or the establishment of bases for operating Mossad agents and recruiting them to cause sabotage operations in the Islamic Republic, has become Unacceptable. After the Iranian response, the above was placed within the red lines that will not be allowed to be crossed.