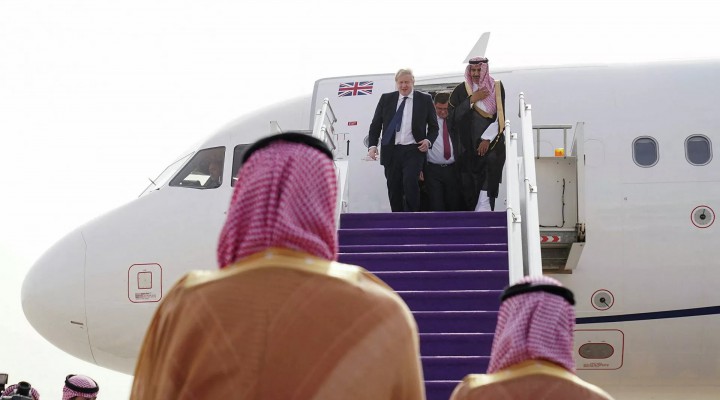 The American-British “special relationship” swung into action this week as Boris Johnson jets off to beg Arab oil kingdoms for help in Western efforts to hit Russia’s economy.

The Americans can always rely on British leaders to produce the oily words necessary to lubricate their rank duplicity and hypocrisy. Think Tony Blair as the global PR man for selling George W Bush’s fraudulent war against Iraq in 2003 and the phantom weapons of mass destruction.

Likewise, Boris Johnson is tasked with peddling the US case for Arab oil exporters to help Western attempts to blockade the Russian economy. Johnson is urging the rulers of the United Arab Emirates and Saudi Arabia to increase oil production in order to offset an anticipated fall in Russian supplies due to Western sanctions.

The US and Britain have committed their nations to ban Russian oil and gas after accusing Russia of unprovoked “aggression” against Ukraine. Moscow says its three-week-old military operation in Ukraine was a defensive response to the US and NATO weaponization of the Russophobic Kiev regime. The Americans and the British are major suppliers of weapons to Ukraine as well as providing military trainers on the ground.

Cutting off Russia’s energy exports may have seemed like a good idea until the inevitable repercussion of higher prices at the pumps kicks in for Western consumers. President Joe Biden and his British side-kick Boris Johnson are reaping the anger of their public who are paying a heavy price for Washington and London’s geopolitical games. Why can’t the US and its NATO allies just negotiate with Russia about security guarantees in Europe and in particular the neutrality of Ukraine regarding NATO membership? It’s a reasonable enough concern from Russia and even the Ukrainian President Vladimir Zelensky is apparently coming round to accept the reality of limits to NATO expansionism.

Ordinary Americans, British and other Europeans “paying the price for democracy and freedom” with higher fuel costs and general inflation just doesn’t wash. The fact is Western nations are getting hammered with economic pain that stems from the US-led NATO bloc pursuing a policy of aggression towards Russia for years.

The US and NATO’s irrational refusal to find a diplomatic solution with Russia for security in Europe has resulted in the conflict in Ukraine – and soaring economic costs for Western societies. Biden, Johnson and the Western political class don’t care about those costs on a personal level. Why should they? They are well insulated from pain due to their individual wealth.

But Biden, Johnson and their ilk are worried about the electoral repercussions and the instability in their own societies from greater impoverishment. If people make the full connection – as they should – that their economic misery is due to Western geopolitics then there will be hell to pay.

Biden needs to stave off the inflation in oil and gas prices as the US mid-term elections loom later this year. One way is to get the Saudis and other Arab hydrocarbon kingdoms to start pumping more exports onto the world market. But these exporters can’t physically make up for the loss in Russian supplies.

As well as that, Biden has an added problem. The Arab leaders are no longer in a hurry to do as he wants. Uncle Sam has talked himself into an awkward corner. Recall that Biden during the 2020 presidential election was slamming the Saudis as a “pariah” regime over the war in Yemen. He vowed to halt US weapons sales. He didn’t deliver on cutting off US weapons, of course, as is American duplicity. But Biden did bad mouth the Arab leaders. And they haven’t forgotten that.

Hence when Biden made phone calls recently to the Saudi and Emirati rulers over increasing oil exports, they reportedly rebuffed his overtures.

That’s where Boris the British lapdog comes in. He is flying off to the Gulf this week to scrape and beg the Arab leaders to open the oil spigots.

The British premier is reported by the British media as having closer personal relations with the Arab leaders than Biden. More accurately, Johnson has just more dexterity at bending over backward and telling barefaced lies than the 79-year-old American president.

Biden can’t even remember whether his vice president Kamala Harris is the “first lady” or “the president”. During his set-piece state of the union speech last month he got mixed up between Ukrainians and Iranians. It’s doubtful therefore that Biden could pull off a fine line act of hypocrisy in visiting the Arab monarchs without making a fool of himself.

It’s a tricky line. So, we’re sanctioning Putin because allegedly he is a dictator but we want to cozy up with unelected Arab autocrats? We’re concerned about human rights in Ukraine but not apparently about thousands of Afghan children being starved to death by US sanctions? We’re concerned about alleged Russian bombing of civilians but not about the bombing of Yemenis who are being targeted with American and British missiles?

The contemptible contradictions in US and British hypocrisy are so rife and flagrant that only a thoroughly abject lapdog could possibly go on such a demeaning errand.