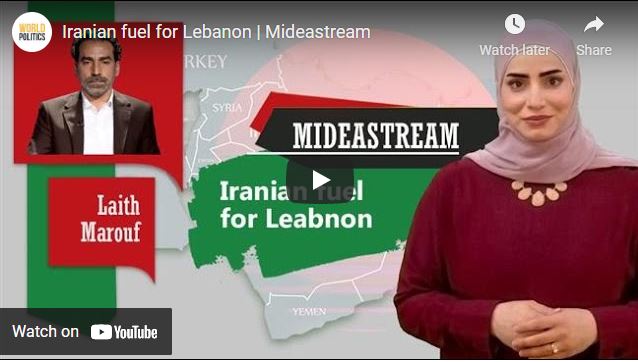 A ship for oil derivatives is headed to Lebanon from Iran, but its arrival in Lebanon will go beyond improving the conditions of the Lebanese. It will be the first ship to ever break the fuel blockade and will establish a new deterrence equation at sea this time. Lebanon’s enemies are aware of its urgent need for energy. They stand behind a large part of its crisis, whether through sieges and sanctions, or through obstruction and obstacles to solutions, by proxy. The Lebanese crisis is no longer tolerable or bearable. When hospitals in Lebanon stop working due to the loss of electricity, and the lives of the Lebanese are at risk, and when a number of them die while in queues in front of gas stations, and when bakeries operate at minimum capacity, intervention to help becomes a national duty, even a moral imperative. This is exactly what Hezbollah did.

To discuss this issue with us from Beirut is Laith Marouf political commentator and Senior media consultant.

It became necessary for the US to make Hezbollah pay the price of the strategic role it played in preventing the fall of Syria, and striking the strategic structure of the takfiri groups in Iraq. Added to that, Hezbollah’s extended hand to the Yemenis who are facing a colonial legacy that is more than a hundred years old. Above all, Hezbollah’s role in uniting the resistance forces in Palestine, Lebanon, Syria, Iraq and Yemen. Today, the Americans, along with France, Britain and Germany, in cooperation with Saudi Arabia and the UAE, are using their old Lebanese tricks (political parties, feudal leaders, religious leaders, and academic institutions), And the new ones (civil activism institutions and NGOs), in an effort to attain one goal: implementing the strategy of tension with maximum pressure against Hezbollah.

We continue from Beirut with Laith Marouf political commentator and Senior media consultant.