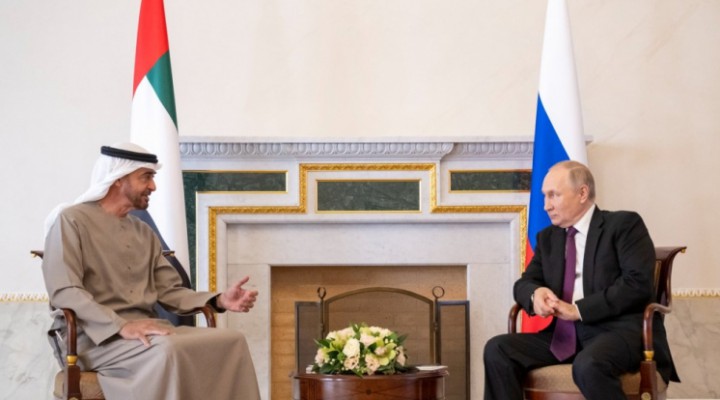 The OPEC+ decision may lead to an additional reconfiguration of forces in Eurasia.

On October 11, UAE President Mohammed bin Zayed Al Nahyan arrived in St. Petersburg for talks with Russian President Vladimir Putin. The visit came immediately after new massive strikes on Ukraine’s infrastructure as part of a special military operation. In addition, the day before, the ministers of OPEC+ countries met in Vienna and decided to reduce oil production, which hit the interests of the U.S. and Western countries. In the US, they even discuss again the adoption of the bill No Oil Producing and Exporting Cartels Act (NOPEC), which could give the U.S. Department of Justice authority to sue the OPEC members for violations of antitrust laws.

Amid efforts to set a price cap on Russian oil, as announced by representatives of the neoliberal anti-Russian cartel, production cuts are clearly upsetting their plans.

Although the collective West at the moment makes only Russia a pariah, it should be noted that Iran and Venezuela are also part of the multipolarity supporters club, the axis of good, as the late Venezuelan President Hugo Chavez called such cooperation. And it looks like the axis of good might gain new members. At least other OPEC member states have a pragmatic interest in multipolarity.

Saudi Arabia is one of them. Meanwhile, the leadership of this country have a rather strained relationship with the U.S., so they knew for sure that the Biden administration would be unhappy with the decision to reduce oil production. Joe Biden himself directly blamed Russia and Saudi Arabia for the rise in gasoline prices in the United States. “Every kitchen table cost is going to go up, not down. And I realize costs are going up on food. And I was able to bring gasoline down well over $1.60, but it’s — it’s inching up because of what the Russians and the Saudis just did,” he said, speaking at the Volvo Group plant. It is worth remembering that the Democrats are highly outraged about respect for human rights in Saudi Arabia, also looking for any opportunity to punish Crown Prince Mohammed bin Salman al-Saud over the case of the murdered journalist Khashogi.

Despite such outbursts from the U.S. leadership, Saudi Arabia has its own motivation to reduce oil production. Against the background of the approaching recession and shrinking demand for energy, Riyadh seeks to maintain the level of oil prices in the near future. They understand that the U.S. is unlikely to help stabilize their economy which is still quite fragile and unstable to price fluctuations and needs a large amount of funds for economic development and diversification programs.

For next year, Saudi Arabia is expected to need a price of $69 to $76 per barrel of oil in order to balance its budget. According to the Vision 2030 economic program, there must not be any disruptions for the success of various sectors and the development of new technologies. That is why they are building their strategy basing on their own interests, without looking back at the U.S. And in Washington, on the eve of the Congressional elections, such a decision looks like a conspiracy by Russia and Saudi Arabia against the Democratic Party. Hence the White House’s statements about the possibility of reviewing relations with Riyadh. Even voices have been heard calling for the withdrawal of U.S. troops from Saudi Arabia and the Emirates for doing so. If this happens, Moscow could be celebrating another victory in the Middle East, although no effort has been made on its part. Washington is intimidating Saudi Arabia and the Emirates with possible aggression from Iran. But at the moment, because of massive protest, Tehran is incapable of such action. The only thing that Iran’s armed forces and the IRGC can still do is to attack occasionally the territory of Iraqi Kurdistan, similar to those actions carried out by Turkey. At the same time, Iran is intensively developing cooperation with Russia, in the oil and gas sector, too.

Moscow could play a unifying role between the Middle Eastern states by offering to mediate disputes and mutual claims. This would additionally open the way to the region, including Yemen, where the conflict continues. Importantly, this effort would open the way for non-Western diplomacy. And since Western methods and their derivatives (including UN decisions) have proved a failure, there is a chance that Russia’s actions, if they are competent and consistent enough, could indeed lead to détente in the region.

However, supplies of military equipment from Russia and security assistance could also be part of Moscow’s package of solutions for Saudi Arabia and the Emirates. These countries have not imposed sanctions against Russia and are progressively moving away from cooperation with the West, indicating a geopolitical climate favorable to Moscow.