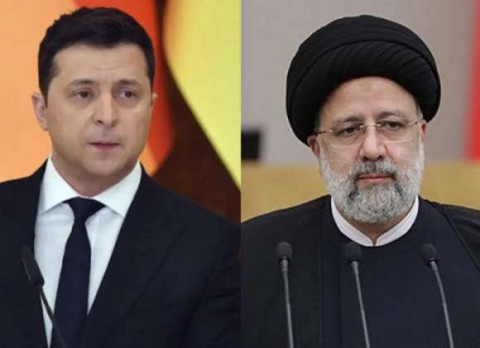 Ukrainian President Volodymyr Zelenskyhas severely downgraded diplomatic relations due to its alleged provision of military drones to Russia. He described this move, which Iran denied, as “collusion with evil” and claimed his country’s air defences had shot down eight drones of this type.

To Zelensky’s doesn’t mind, the supply of tens of billions of dollars of weapons to his army by the US, Europe and Israel does not amount to collusion with evil but a legitimate charitable donation. He forgets or pretends to forget his own major share of responsibility for this war by provoking his Russian neighbour and reneging on the agreements governing relations between the two countries, especially the Minsk Agreement. This provocation peaked for Moscow when he declared, at the instigation of the US, his determination to join NATO and have its missiles based on Russia’s border.

We do not know how accurate Zelensky’s accusations are. If it’s true that Iran has sold drones to Russia that should notcome as a surprise. It is a member of the Shanghai Cooperation Organisation set up in parallel to NATO, and is allied with the group leaders Russia and China against the US and Western governments that have subjected it to vicious economic sanctions for the past 40 years. Russia is also one of Iran’s most important sources of weaponry, notably S-300 surface-to-air missiles.

It is Zelensky’s short-sighted policies, his collusion with a US scheme to drag Russia into a war of attrition that results in its economic and military destruction, which led his 45 million compatriots into this calamitous situation: facing a grinding war with a powerful nuclear-armed neighbour, while his American ally and benefactor contributes not one soldier to his country’s defence.

Zelensky fumes with outrage at Moscow’s holding of referendums in four southern and eastern Ukrainian districts aimed at annexing them to the Russian Federation. Yet he enthusiastically supports Israel’s annexation of the Golan Heights and East Jerusalem, its colonisation of the West Bank, and its attacks on Gaza and Syria. You’re getting as good as you gave, Mr. Zelensky.

Iran has every right to support its ally Russia and provide it with whatever assistance it can — drones included — against a shared American enemy that subjects it to political and economic sanctions and is conspiring with Israel to attack it after failing to force it to submit to its terms for a new nuclear agreement.

It won’t hurt Iran for Zelensky to downgrade diplomatic relations or even cut them off completely. It is no great honour to maintain such ties with a fool who led his country to ruin and may not remain in his post for long.

The Ukraine war, now approaching its eighth month, will not only change the entire world but createa clear realignment between supporters of USdominance and its destructive plans and an opposing camp. The tension in relations between Iran and Ukraineis perhaps the start of this process, withmore surprises to follow.

Meanwhile, Iran should be proud of having developed a sophisticated arms industry whose drones are sought even by a superpower like Russia.

China: Will it now Toss Caution to the Wind?

Six months into Ukraine’s collapse, the world has changed forever

0 thoughts on “Iran, Ukraine, and Russia”