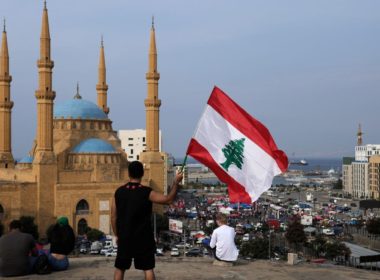 For nearly a month now, Lebanon has been rocked by protests. While initial demands focussed on the resignation of those responsible for the country’s economic problems and were backed up by anti-corruption slogans, protesters are now calling for a constitutional reform, and the US and the West are not only expressing concern over the situation, but also their interests in Lebanon.

Let us take a look at current events in the context of regional politics.

Following the civil war in 1989, a consociational legal framework was established in Lebanon, where representatives of various religious groups were given a quota of seats in parliament, a Christian served as president and a Sunni became prime minister. This format was inherited from the 19th-century Ottoman Empire, when the Mutasarrifate system was in operation in Lebanon, which remained in place during the French mandate.

It faced its first serious crisis a couple of years ago, when the country failed to elect a president. Parliamentary elections were held in May 2018, at which the patriotic parties of the March 8 Alliance received a majority. The March 14 Alliance, led by Saad Hariri of the al-Mustaqbal (Future Movement) party (tellingly, its flag depicts the same fist as every protest movement funded by the West), lost 13 seats compared with the previous balance of power and found itself in the minority. Although Hariri was appointed prime minister, key decisions could not be made without coordinating with Hezbollah and its allies (the Amal Movement, the Lebanese Communist Party, the Progressive Socialist Party) from the March 8 Alliance. Saad Hariri is openly referred to as an agent of Saudi Arabia, so, given the conflict of interests with Shi’ite and pro-Iranian Hezbollah, anything he did had to be carefully thought out and coordinated.

Clearly, this situation did not suit the West. While the EU had previously recognised Hezbollah’s military wing as a terrorist organisation with all the consequences that entails, it was forced to change its position after the Lebanese party’s confident victory and its representatives entered parliament. At the same time, Washington continued to put pressure on the EU over Hezbollah, and the West’s ultimate goal was to achieve a new balance of power within the country’s parliament and government.

Another party with an interest in the Lebanese crisis is the United Arab Emirates. For many years, Lebanon provided a broad range of banking services in the region, earning it a reputation as the Switzerland of the Middle East. Western sanctions impacted the sector, and the United Arab Emirates were quick to take advantage of the situation. It seems that Abu Dhabi is trying to effectively juggle regional conflicts and offer comprehensive solutions, in this case in the financial services sector.

The current protests were initially in response to the announcement of a petrol price increase at the end of September 2019. Following a strike by petrol station workers, the scope of the protests widened to cover socio-economic demands.

The government’s inadequacy also played a significant role, since a tax increase on numerous goods and services was announced, including the use of social media and instant messengers. Minister of Telecommunications Mohammad Choucair (from Saad Hariri’s March 14 Alliance) announced a $6 monthly tax on WhatsApp messages. Taking into account the numerous other taxes and charges, the move seemed like pure insanity. Or a calculated act of provocation that brought out thousands of people onto the streets.

Given that there are a large number of non-governmental organisations and entities in Lebanon funded by George Soros and Western foundations (such as SMEX, which deals with human rights on the internet along Western lines), it would not have been difficult to mobilise various groups of provocateurs.

The demands took on a political dimension, since that kind of audacity rallied representatives of various social groups and religions who also remembered the numerous corruption scandals involving liberal politicians. Patriotic forces found themselves in a difficult position. If they didn’t speak out against Hariri, it would look like they were backing him. Their support among the population would then fall automatically and they would be perceived as just as corrupt as the pro-West liberals. Despite awareness-raising efforts, many of the protesters joined the civil disobedience protests being overseen by emissaries of the West. Srđa Popović from the Serbian Otpor! movement, who has worked with Western intelligence agencies for many years and advises on the staging of coup d’états, has also been spotted in Lebanon.

To achieve their aims, meanwhile, the protesters blocked the country’s main motorways, including the Beirut–Damascus motorway and the motorway connecting the north of the country to the south.

Nabih Berri, leader of the Amal Movement and Speaker of the Parliament of Lebanon (representing the Shi’ites), tried to mediate a political settlement, but to no avail.

On 29 October, the country’s prime minister, Saad Hariri, resigned. It is telling that only after his resignation did the country’s security officials start trying to clear the road blockades. At the same time, according to insider information from within Lebanon, the country’s military leaders were blackmailed by the US, Great Britain and France, which said there would be reprisals if any kind of force was used against the protesters.

Tellingly, Samir Geagea – the leader of the Maronite Lebanese Forces party, which cooperated with Israel during the civil war – immediately tried to fill the political vacuum. The party is responsible for the 1982 Sabra and Shatila massacre and took an active part in the so-called “Cedar Revolution” of 2005, when pro-Western parties and their allies demanded the withdrawal of Syrian forces from the country. At that time, the US was actively putting pressure on both Syria and the Lebanese government. The forces withdraw, and this was immediately followed by a political deterioration and yet another armed conflict with Israel.

The EU has also started to openly set out its demands, although, prior to the resignation, it had been suggesting the formation of a technocratic government. The West has also hinted at the possibility of writing off Lebanon’s debt to the tune of $11 billion, but only if everything is done in accordance with its requirements. Theoretically, under current law, the majority coalition, which also includes Hezbollah, can form a new government without Saad Hariri’s people. If this were to happen, then the new cabinet would not only face opposition from the West and continued protests throughout the country, but also sabotage from the country’s fifth column, including the Central Bank of Lebanon, which does everything the US State Treasury and George Soros’ institutions tell it to. However, the euphoria over Hariri’s resignation and the commitment to continue protesting could overpower the common sense of even those who saw recent events as a chance to cleanse Lebanon’s political Olympus of corrupt officials.

The only thing that’s clear is that the West is not going to weaken its grip and will try to achieve its aim – new parliamentary elections with minimal opportunities for the country’s patriotic forces.

This is confirmed in a speech given by Jeffrey Feltman from the Brookings Institution on 19 November at a hearing of the Committee on Foreign Affairs. Feltman stated that Lebanon is of serious interest to the US because “Russia […] eyes Lebanon as a venue to continue its aggressive expansion of its regional and Mediterranean role”. According to Feltman, Bashar al-Assad is dependent on Russia, Hezbollah and Iran, making Lebanon “a venue for global strategic competition”. Hezbollah is also a threat to Israel, a US ally. Hence the US must intervene and even offer military aid to its Lebanese partners.

Finally, given the current instability in Iraq and Iran, the crisis in Lebanon looks like part of a strategic operation to destabilise the Middle East’s “Shi’ite Crescent” from within.

0 thoughts on “Lebanon: A Colour Revolution Or A Regional Anti-Shi’ism Project?”